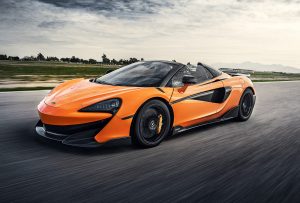 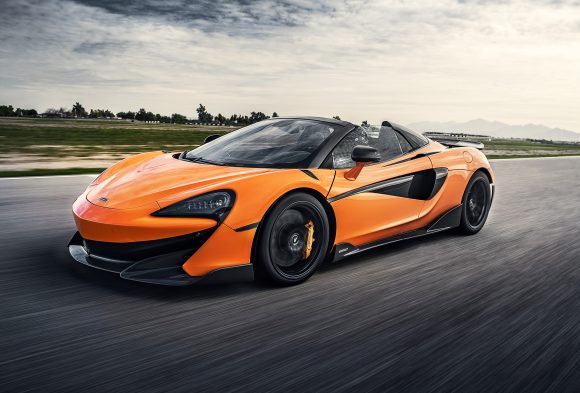 The market for highly focused, track-orientated supercars is a lucrative business – you only need to look Germany’s way for proof of that and the success of the likes of the Porsche GT3. So it’s hardly a surprise that relative upstart McLaren has sought to emulate that cash cow with its LT series. Short for Longtail, the marque’s track-orientated range follows in the famous footsteps of the 1997 Le Mans-winning F1 GTR Longtail. Now it’s time for the fifth chapter in the firm’s LT story – the 600LT Spider.

The Longtail badge means McLaren’s engineers are targeted to save weight, improve aerodynamics and increase power while putting driver engagement and a track focus at the  heart of its design. Based on the 570S Spider, it’s had an impressive 100kg stripped out to create this LT version. 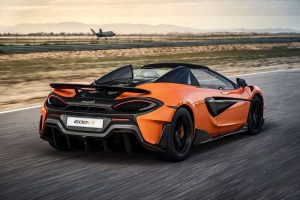 The seats are 21kg lighter, deleting air conditioning saved nearly 13kg, while new wheels and specially made Pirelli Trofeo R tyres lopped an additional 17kg from the kerb weight – even the wheel bolts were swapped for titanium options to save a further 460 grams. This staggering weight-loss programme has created a car with incredible focus.

Using the same engine as the 600LT Coupe that arrived last year, the Spider generates an astonishing 592bhp from its 3.8-litre twin turbo V8. A stomach-twisting 620Nm of torque helps propel the car to 60mph in just 2.8 seconds – and 124mph just 5.4 seconds later. Keep your foot planted and it’ll go on to a top speed of 201mph with the roof raised, and 196mph with it down.

Those figures sound impressive and they most certainly are – this is one devastatingly quick supercar. It delivers that power in sledgehammer blows to your nervous system, rattling through its seven-speed gearbox in blink-of-the-eye seamless shifts.

It’s all combined with a raucous soundtrack, a choir of whooshing, sucking and blowing from the turbos, coupled with almighty whip cracks from the twin top-mounted exhaust pipes on down shifts. It’s an addictive combination that’s nothing short of automotive theatre, Hollywood blockbuster style.

In true Longtail tradition, the 600LT gains 47mm at the rear and 27mm at the front over the 570S. A fixed rear spoiler, carbon-clad top-exit pipes and a speed hump-bothering front splitter give the McLaren an aggressive, purposeful look. However, it’s the roof that’s the real Spider talking point.

The three-piece hard-top raises or lowers in 15 seconds at speeds of up to 25mph, and when it’s stashed away you can really enjoy the engine’s chart-topping soundtrack.

Inside, it’s obvious the LT has been on a diet. The seats aren’t the comfiest – they’re thin and the fixed back will need you booking a chiropractor’s appointment quicker than you can say ‘acupuncture’. That said, you don’t really buy a track-focused car like this to cross continents in comfort. Carbon fibre has been used extensively inside to save weight too – even the glovebox and door pockets got the chop to save precious grams.

McLaren still suffers with an infotainment system that doesn’t live up to rivals’ – most of its competitors have the might of big parent companies’ buying power behind them, allowing them to add things like Apple CarPlay far easier. 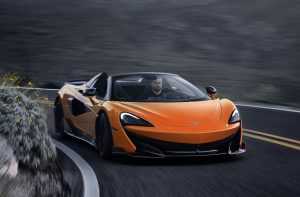 The McLaren system is a little clunky in places – think old smartphone – but it’s functional and reasonably easy to get on with.

The standard specification is generous, and so you’d hope for £201,500, but there’s plenty to tick on the options list for those looking for something more bespoke. MSO Paint will set you back £6,120, a Bowers & Wilkins audio system £3,640, while our test car had more than £10,000 spent on additional carbon fibre.

McLaren won’t say how many 600LT Spiders  it’ll be making, revealing only that it’ll be in production for just 12 months, but as a gauge its predecessor, the 675LT Spider, was limited to 500 units – and they sold out in just three weeks. Those now command a considerable premium  as collectors’ cars and it’s likely the 600LT Spider will follow suit.

It’s a hugely rewarding car to drive, ferociously fast and a rightful rival to the likes of the Ferrari 488 Pista Spider or Lamborghini Huracan Perfomante Spyder. It’s a special car this, from a very special car manufacturer indeed.