FORD has pulled the covers off the new Fiesta at its Go Further 2016 event in Cologne in front of an audience of 2,500 dealers, media and employees.

Four versions of the Fiesta, which is now in its seventh generation, were revealed: Titanium, ST-Line, Vignale and Active.

The Fiesta has been treated to a much more grown-up approach to its styling when compared with its predecessor. The front end has been completely redesigned, as has the rear of the car. The iconic rear lights that were on the C-pillar of the previous model have been moved down the back of the car and are now just below the boot window sill.

The Titanium is set to be the core model of the updated Fiesta line-up, while the ST-Line, Vignale and Active all carry their own, more distinct images. 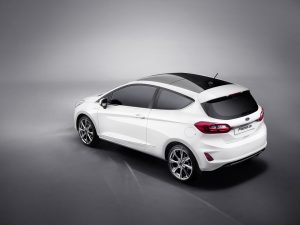 The ST-Line’s design is inspired by Ford’s performance line-up of vehicles, such as the current Fiesta ST and Focus RS. It features a more aggressively styled body kit, two variations of 18-inch alloy wheels and a sportier exhaust tip.

The Fiesta Active is the first vehicle to be introduced to the new SUV-inspired line and features a far more rugged-looking design. Black cladding features on the front and rear bumpers and side skirts, while the ride height has also been increased by 18mm. The Fiesta Active has been designed to contend with the likes of the Citroen C3. More Ford Active models will be introduced in the future.

The Fiesta Vignale is the flagship model of the updated line-up. Like the other Vignale models – Mondeo, S-Max, Edge, and Kuga – the Fiesta’s comes equipped with a plush leather interior, large eight-spoke alloys, contrast stitching throughout the cabin and plenty of Vignale badging.

The engine line-up for the new model has also been revised. The Fiesta is now available with three different engines, all in various states of tune.

The petrol line-up consists of a 1.1-litre TiVCT, with either 69bhp or 79bhp, and an improved version of the 1.0-litre EcoBoost unit. This engine is now available with either 99bhp, 123bhp, or 138bhp.

The TiVCT engine is available with an all-new five-speed manual gearbox, while the 1.0-litre EcoBoost unit comes with a new six-speed manual or a six-speed automatic, depending on the level of power. 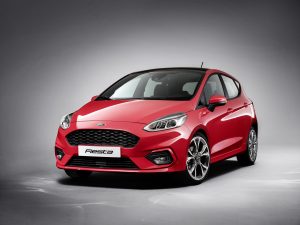 In terms of diesel engines, Ford is offering customers a 1.5-litre TDCI unit. This engine is also available in multiple states of tune, with either 84bhp or 118bhp.

For the first time, all Fiesta models with more than 98bhp come equipped with full disc brakes, allowing for a vast improvement in stopping distances.

Also a welcome addition to the new Fiesta range is a far more user-friendly cabin. Gone is the multitude of buttons that adorned the dash of the previous car. This has been replaced by an eight-inch touchscreen that features Ford’s new Sync 3 infotainment system, which incorporates navigation, DAB radio and improved voice commands that can respond to requests such as: ‘I need a coffee.’ Apple Carplay and Android Auto are also available for improved smartphone connectivity.

Ford has also introduced a multitude of active safety and driver assist technologies to the new Fiesta. A highlight is a new autonomous emergency braking system that can detect hazards from as far away as 130 metres. If there is no input from the driver to avoid the oncoming hazard, the Fiesta will automatically deploy the brakes at a distance of 40 metres.

Speaking about sales projections for the new Fiesta, Roelant de Waard, vice-president of marketing, sales and service at Ford of Europe, said: ‘Our objective is to take the Fiesta upmarket. 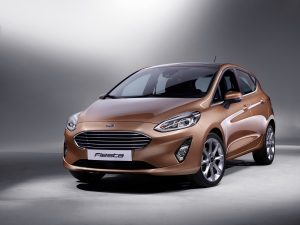 ‘We could’ve gone to maximise sales but for us it’s more important to respond to the customers in the market, which says we like an industry that is spending more on smaller cars and we would like you to design a car for that.

‘So in terms of sales volume, strange to hear this from a sales and marketing person, but that’s not my number one objective. We want to sell all the cars we can build, but to get that mix of vehicles, that is the main objective. The emotional derivatives [ST-Line, Vignale, Active] really will turn out to be relevant.’

When asked whether this move upmarket could see the price of the Fiesta rise, de Waard said: ‘You will have to look very carefully at what we offer for the Fiesta. The first price for the Fiesta will look a lot higher, but that is deceiving because it will actually not have gone up much, it just starts with a higher specification.’

While no word has been given on pricing, the new Fiesta is expected to go on sale in the UK in time for the September 2017 plate change.

MORE: All pictures from this year’s Used Car Awards ready to be downloaded

Waste not, want not – JLR to use recycled plastic, fabric and fishing nets for mats and trims