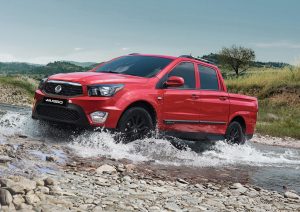 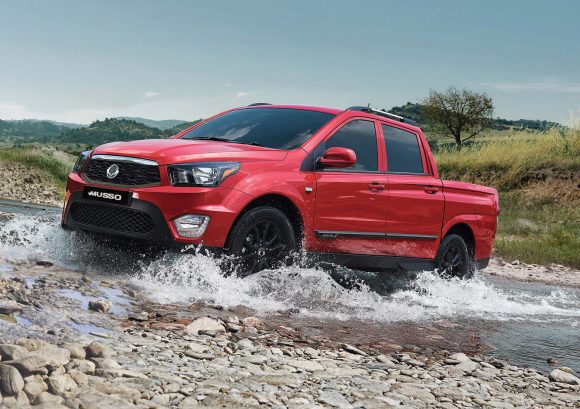 Can the SsangYong Musso muscle in on the pick-up scene and take on well-established rivals? Andrew Evans reports.

The Musso is largely an updated version of the Korando Sports pick-up, but with a new name brought back from SsangYong’s past. Musso – Korean for ‘rhinoceros’ – brings not only an exterior update and rebadge, but also a new engine. It’s roomy and comfortable enough to accommodate the kids when not put to work. Specify the

optional load cover and the dogs can come too.

The Musso introduces a Euro 6-compliant 2.2-litre e-XDi diesel unit for the first time. This can be paired with either a six-speed manual or a new six-speed automatic from Aisin. The new engine brings an improved punch that boosts the towing rating and brings a mild increase to the fuel economy of around five per cent, but performance is unaffected.

Unlike the majority of vehicles in the pick-up sector, the Musso makes use of independent rear suspension. This gives it a surprisingly compliant ride. Without the extra weight, the Musso can get a little soggy over bumps, but by and large it’s better than rivals that stick to a more basic suspension. The steering is somewhat mushy and vague though.

Autocar said that ‘the Musso is still one of the cheapest pick-ups on the market, so if saving money is your top priority, then this should be your first stop’. Auto Express said: ‘The SsangYong Musso is a genuine improvement over the Korando Sports it replaces.’

The Musso proves a commendable all-rounder but loses out to the majority of its rivals in most areas. The engine and gearbox, particularly the automatic, certainly make the Musso worthy of consideration, with the good ride delivered by the multilink rear suspension a real boon. It’s very inexpensive, too.