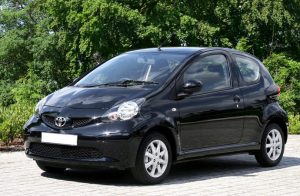 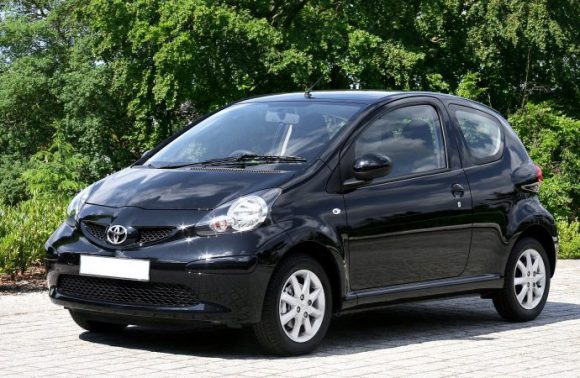 A FRUSTRATED couple have dumped their Toyota Aygo outside the dealership they bought it from, dubbing it the ‘worst car ever’.

Megan Dixon and boyfriend Daniel Mason had bought the Aygo from RRG Toyota Macclesfield in December 2013 and claim to have endured three years of reliability woes with the vehicle. After leaving their car outside the garage with ‘worst car ever’ spelled out in electrical tape, the couple has left a list of the faults taped to the window.

This includes two engines, three clutches, replacement seats, lights and an exhaust, in just 22,000 miles from new. Dixon, who works as a theatre nurse at the Christie Hospital in Manchester, claims to have reached breaking point after the car has spent 10 weeks in the garage this year alone.

Dixon said: ‘Whenever I get a call I have to be at work within half-an-hour. Because of the car I’m terrified that one day I will break down and not make it. All the stress that brings with it is horrible.

‘I don’t want to gain anything. I don’t want money or a better car. I just want the one I have to work, or a like-for-like replacement.’

The note in the Aygo also stresses that the couple have no quarrel with the dealership, rather the brand itself.

Dixon added: ‘Toyota talk about complete customer satisfaction, but I’m not satisfied at all. They’ve accused me of being a boy racer because of the condition of the clutch. I’ve been in tears in there.

‘It’s under a five-year warranty but each time I get it back they’re giving me a car with faulty parts that doesn’t remotely live up to expectations.’

A Toyota spokeperson said: ‘We apologise for any disappointment and inconvenience that Ms Dixon has been caused.

‘We are committed to standing by the terms of the warranty cover and address any manufacturing defect that occurs with the warranty period of five years or 100,000 miles (whichever comes sooner).

‘As this matter has been referred to Motor Codes, we are aware they are investigating further and we will await their response.’

MORE: Kia ending 2016 with new offers and chance to go to Australian Open