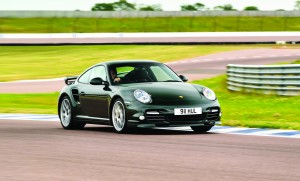 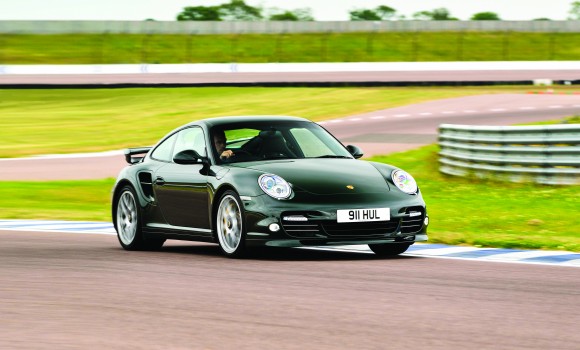 JAMES Baggott fulfils every motoring journalist’s dream and drives a Porsche with a special number plate.

I’d been looking forward to this moment for years. For some in the office too young to remember, it meant nothing – but for me it was a coming of age. Finally I’d be driving a Porsche with the famous 911 HUL numberplate.

I’ve been a motoring nut for years, spending money I often didn’t have on car magazines, long before I could even drive. And it was on those glossy pages that I became familiar with the famous plate. Owned by Porsche GB for decades it was the first private plate the firm acquired and ever since has taken pride of place on the Porsche press fleet Turbo models.

I’d seen it flying through the air in pictures on the pages of Evo, shot by countless talented car snappers over the years, and now it was my time to drive it.

Here’s my week behind the wheel of Porsche’s fastest 997 edition – the 911 Turbo S with a very special moniker.

It’s only you that cares – shouted one pre- pubescent member of the team as I explained, to yet another 911 admirer who clearly didn’t share my enthusiasm for six numbers and letters, what the plate meant to car fans. Most people were more interested in the colour our test car had arrived in. Paint jobs make or break cars and the camouflage green of our test car was clearly splitting opinion.

Still, it could have been painted pink for all I cared, as what was sitting over the rear wheels was of far more interest to me. The 3.8-litre, turbo-charged lump produces a whopping 530bhp and 700Nm of torque thanks to a tweaked turbo output. The drive north to our photoshoot at Rockingham was one of the longest (thanks traffic) but most enjoyable I’ve ever had.

Photoshoot day at Rockingham and we’ve got 15 cars lined up for a series of tests. Also here is three times British superbike championship winner John Reynolds on the latest Suzuki GSX- R1000. He’s at our shoot to take on the Nissan Juke R, but it’s only fair we let him try his luck against the Porsche too…

With a 0-60mph sprint time of 3.1 seconds, the PDK automatic gearbox and launch control system mean that’s very achievable every time. Engage Sport Plus, floor the throttle with your foot on the brake, and the revs settle at a heady rpm. When you lift off the brake the car thunders towards the finish line in a cacophony of air sucking, turbo whooshing and tyres ripping chunks out of the asphalt. All I have to do is steer.

Scan the QR code, right, to see how close it was.

Two tanks of fuel into the loan and I’m impressed the Turbo S is returning 26mpg. My old Focus ST never got any better than 23mpg on a long journey and considering this has such an almighty power output that’s very impressive. Today I’m heading into London for a meeting with the Queen. Well, I say meeting, I really mean a concert in her garden for the Coronation Festival.

For what is essentially a rival to a Ferrari 458 or McLaren 12C, the Turbo S is fantastically well behaved in the clogged-up capital. Visibility is excellent and although it’s got a low splitter at the front, speed humps aren’t really a problem nor tight underground and overpriced car parks.

The drive back south is a magical one. London’s streets are a joy in the small hours of the morning and each traffic light gives me a chance to test the wife’s patience.

It’s the Goodwood Festival of Speed, Porsche is headlining the event, celebrating 50 years of the 911, and I can’t quite believe I’ve got the honour of driving 911 HUL to the south coast celebration of combustion.

It’s clear on the way there and back that the plate doesn’t just hold sway with me. I lose count of the number of phones I see trained on the Porsche, capturing pictures for tweets and status updates.

Another business trip north beckons and my colleague and I decide to leave after the evening’s rush hour. Gosport to Chester, some 250 miles lay ahead and even at 9pm the digital temperature gauge is reading 25 degrees C. Hot tarmac and sticky tyres make the trip a delight as we collect the cast and extras of A Bug’s Life on the bonnet.

The seats get a little uncomfortable over long distances – they’re fixed carbon-fibre jobs – but apart from that the Turbo S is a competent tourer. It’s time for 911 HUL to return to Porsche. After a week behind the wheel of the monster I’m smitten. Yes, the ride is firm and the tyre noise a little intrusive. Granted the seats aren’t the most cosseting and the 997 interior is showing its age now the 991 has arrived.

However, never have I driven a car quite so intoxicating, quite so full of character and quite so mind-alteringly fast as the Turbo S.

The fact it was wearing one of the most iconic plates in motoring folklore simply made the whole experience all the more special.