Car dealers can add the potential of new-model supply disruption due to a shortage of semiconductors to their list of woes heading toward the key-plate change month of March.

Semiconductors, aka chips, are the brains behind the increasing number of smart features within today’s cars and they’re currently in very short supply.

Car makers have been hit globally, including in Europe, and are slowing or even temporarily stopping production of key models for the UK.

Affected plants already include Ford’s Saarlouis factory in Germany where it makes the Ford Focus, which has shut for an entire month from January 18 ‘as a result of the semiconductor supply issue’, the company said.

VW stopped production for several days at its Wolfsburg plant in January, where it makes the Golf among other models.

Audi has furloughed 10,000 staff in Germany for the issue and production has been hit at its Ingolstadt plant, where it makes the Q2, A3, A4 and A5. Also affected is Neckarsulm, which makes the A6 among other models.

Here in the UK, Honda has had to shut down production briefly at Swindon, where it makes the Civic and has suffered shortages at its Jazz plant in Japan.

The chip shortage is getting so bad that LBBW, a German bank, predicted it could cause the global production of cars to drop this year by up to 2.2 million.

Nissan Sunderland has yet to be affected by the shortage, Nissan global chief operating officer Ashwani Gupta told journalists on Thursday, but said it ‘was a global challenge for every manufacturer’.

The problem first came to light in the last quarter of 2020, and while it’s slowly getting better, Gupta predicted that chip supply wouldn’t return to normal until May.

2.2m
Cars that may not be made because of semiconductor shortage

The reason for the shortage is threefold, Gupta said. Carmakers revised forecasts down because of the pandemic, while at the same time demand from the likes of smartphone makers and games console companies shot up.

But demand for cars then recovered incredibly quickly after the first lockdown, coming on top of increased demand for the number of chips for each car.

‘The new Qashqai, which will we will launch in Europe [this year] will have more than 50 per cent more sensors than it had before, because of features like ADAS [advanced driving systems],’ Gupta explained.

Anecdotally, carmakers are focusing their limited chip supply on profitable models such as SUVs and electrified models that can help reduce their CO2 footprint for the year.

‘The semiconductor shortage is not the biggest issue in the world right now,’ he said.

Both carmakers and their suppliers face production slowdowns due to personnel testing positive for Covid-19, while ports congestion post-Brexit is hitting supply chains.

The latest to be affected was Nissan Sunderland, which had to stop production of its Qashqai and Leaf on Friday (January 22) due to parts hold-ups at the Felixstowe port.

The question is for car dealers, how much does it matter? When showrooms have been forced to close and rely instead on online sales, supply isn’t their biggest problem.

‘On a like-for-like basis my retail order take was 48 per cent down in the last seven days, which was not a surprise.’

‘We the retailers have seen zero impact, but that could be because the manufacturers stockpiled,’ he said. ‘It could be stocks are being burned through.’

Mike Allen, an analyst of the motor trade at Zeus Capital says dealer groups he has spoken to certainly have the supply issue firmly on their agenda.

He told Car Dealer: ‘These supply issues are highly likely to cause problems with March supply and will mean March doesn’t look good.

‘Normally dealers would be building up their order banks for March now, but that is being disrupted by lockdowns and these supply constraints.’

Allen said this is likely to skew the year’s numbers for dealers and supply is likely to be ‘better by the summer’.

‘I don’t think this will be a long term issue and think Q2 and Q3 will be better for dealers,’ he added. ‘Investors want to see signs of recovery and some sense of normality and already are looking ahead to 2022.’

He added that in some respects it’s a good thing that all the ‘bad news comes out now’ and then investors will feel more confident.

‘The dealers that will do well will be the ones that have stock ready to sell and won’t be impacted as badly by the semiconductor issues,’ said Allen.

UK automakers so far haven’t warned of any supply disruption. Among responses we received, VW said ‘planned production for the UK has not been impacted and the outlook for stock levels through the first quarter remains positive’.

Meanwhile, Jaguar Land Rover in a less revealing note said: ‘We are aware of the issue and are monitoring the situation closely.’

Some privately wonder if automakers are partly reacting to lack of demand by throttling back production. For example it’s probably not a coincidence that Ford is stopping Focus production but continuing with that of its hottest model right now, the Puma SUV. 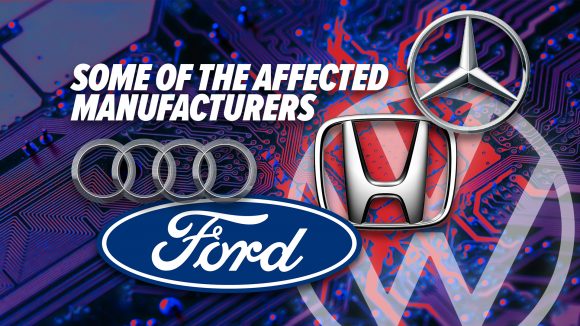 Professor David Bailey, an automotive industry expert at the Birmingham Business School, said consumers might have to be flexible over what cars they buy.

He told Car Dealer: ‘A modern car could contain hundreds if not thousands of semiconductors, hence the impact of such shortages on auto assembly.

‘What that all means in turn is that the exact model of car you’re looking for at a dealer may not be available if production has been hit.

‘Consumers might have to be a bit more flexible than usual in their model choice.’

Prof Bailey said the semiconductor issue was a direct result of the Covid pandemic and while the car industry has recovered quickly it is ‘still feeling some of the longer term fall-out’.

The biggest fear is that the chip shortage is another hurdle for dealers hoping for some sense of normality in March. A slow January and February could be tolerated if March roars back as sales did after the previous lockdown, but the signs aren’t good.

‘The feedback I have is that business is quieter this time than in previous lockdowns, with lower levels of click-and-collect and not much going on to create the order build for March,’ Steve Young, managing director of dealer analyst firm ICDP, said.

‘In the meantime, Q1 targets still exist, at what are looking to be unachievable levels. In volume terms that would suggest the chip shortage is not a problem, but sod’s law would say that when there is a real order prospect, it will be for a car that is not available…’