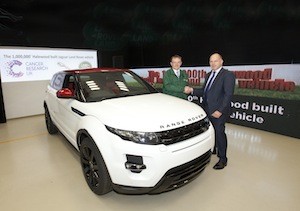 JAGUAR Land Rover is celebrating the production of its 1,000,000th vehicle at its Halewood manufacturing facility, near Liverpool.

The landmark car is a unique Range Rover Evoque painted in a one-off colour combination of Fuji White and a contrasting Firenze Red roof. It will be donated to Cancer Research UK in preparation for a special car auction event in 2014, which will see all funds raised go to supporting projects in the North West.

Global demand for the Range Rover Evoque exceeded expectations with 18,000 advanced orders before production began in July 2011. Continued demand for the Evoque coupled with growing sales of the Freelander 2 means this production milestone was achieved earlier than predicted.

Waiting lists for the Evoque peaked at 12 months for some markets during the second half of 2011 resulting in Halewood introducing 24-hour production for the first time in 50 years.

Halewood has manufactured 255,186 models of the car year-to-date, making the Evoque Jaguar Land Rover’s biggest seller. Volume has continued to increase significantly over the past 12 months, prompting the arrival of the 1,000,000th vehicle ahead of original forecasts.

Richard Else, operations director at Halewood, said: ‘We are delighted to be celebrating this huge milestone for Halewood. This unique Evoque looks stunning and is a one-off vehicle that will raise money for Cancer Research UK projects here in the North West.’

Head of volunteer fundraising at Cancer Research UK, Simon O’Leary, added: ‘We are incredibly grateful to Jaguar Land Rover for thinking of us and making such a generous gift. Cancer Research UK receives no government funding for its life-saving research, so every step we make towards beating cancer relies on every pound donated. The money raised by the auction of the car will make a real difference in the fight against cancer.’