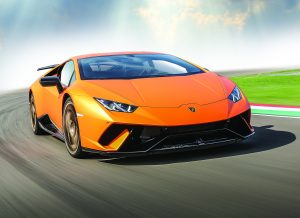 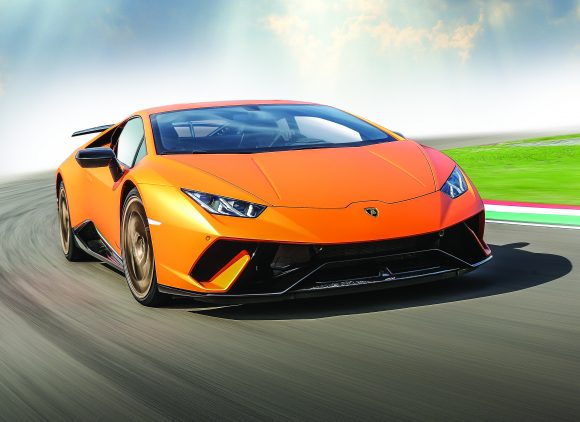 The Performante is based on the already super-quick Huracán supercar, but to make it capable of astonishing lap times – it recently broke the production car record at the Nurburgring in Germany – the Raging Bull brand has gone to town. As is often the case with such machines, there’s been plenty of weight saving. The Performante is down 40kg on the standard car. However, the real headline is Lamborghini’s next-level active aerodynamic package. Dubbed ALA – Aerodinamica Lamborghini Attive – it manipulates the air flowing over, under and through the car to stick it to the road. In high-speed corners you can genuinely feel it at work.

Beneath the engine hatch at the rear sits the mid-mounted 5.2-litre V10 that’s at the heart of what makes this car such a visceral experience. It’s a naturally aspirated unit – also found in the Audi R8 – so that means no turbochargers to suck the fun out of the glorious sound. The noise is raucous and refined in equal measure. At full pelt on track you couldn’t care less about numbers, but they do make for impressive reading. The engine makes 631bhp and 600Nm of torque, which combine with the all-wheel drive system to deliver a 0-60mph time of 2.7 seconds and a top speed in excess of 200mph. It’ll hit 125mph in about nine seconds.

We tested the car at the famous Imola circuit  in Italy before taking it out into the hills surrounding the circuit. On track, the Huracán Performante feels at home, especially at such a high-speed circuit. Despite the race car-like looks and violent performance, it’s surprisingly forgiving on road and track and has the ability to make you look like a hero behind the wheel. And yet it still takes concentration to get the most out of it.

It’s hard to imagine any car that costs in excess of £200,000 being good value for money, especially when a Porsche 911 GT3 costs nearly £100,000 less and is utterly brilliant. But if you’re able to put such a vast sum of money down on a car, the concept of value almost becomes irrelevant. So, what do buyers get for their money? Inside, there’s plenty of soft Alcantara and racy bucket seats as standard, though ‘comfort’ seats can be used instead. The digital instrument binnacle is a delight. For those who really want to splash the cash, the company’s Ad Personum personalisation programme allows near-infinite levels of customisation.

The Lamborghini Huracán Performante is a truly special car that’s certain to become a legendary Raging Bull. It takes the standard supercar’s wild looks and turns the drama up to 11. And the driving experience goes up to 12.