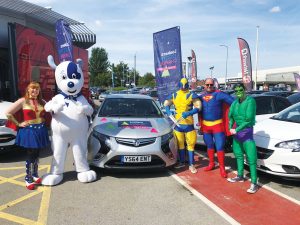 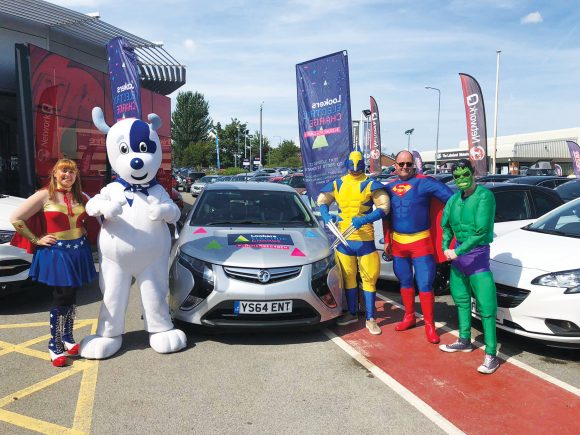 We celebrate the Lookers Electric Charge and discuss the future of motoring with Lookers chief operating officer Nigel McMinn.

LOOKERS is now into the second half of the Lookers Electric Charge, which sees a relay of electric and hybrid vehicles travel 2,000 miles to all 154 of the retailer’s franchised dealerships, where all sorts of fundraising events are being held in aid of motor industry charity Ben.

Representing this year’s Industry Leader Challenge, the baton was handed over to Lookers chief executive Andy Bruce at the end of last year and has since been grabbed with both hands by the entire group.

Currently travelling through the Midlands, staff from dealerships including BMW Stafford and Vauxhall Selly Oak will be completing everything from carpool karaoke challenges to dressing up as the craziest characters they can think of.

Other regions have seen the involvement of the Super Mario Brothers, the entire cast of The Avengers and even Bill and Ben the Flowerpot Men, so the possibilities are endless.

It’s an epic challenge, and although it’s far from over, it’s one that Lookers chief operating officer Nigel McMinn is already celebrating as a huge success.

Hi Nigel, the Lookers Electric Charge seems to have created quite the buzz around the group. Has it gone as well as you had hoped so far?
It’s gone really well and seems to have captured the imagination of our fantastic team across the UK and Ireland. The workplace posts have been really funny and the creativity of our people has been amazing! The engagement on social media throughout the wider industry has also been brilliant. A big thank you to all our staff and partners for helping to make this happen. 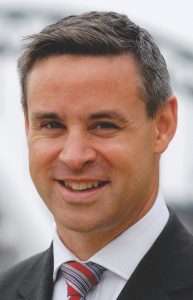 Were you excited to get the chance to raise money for Ben?
Yes, it’s a great cause that’s not widely understood. It’s operated by the motor industry for the motor industry, and seeing first-hand the great work they do to support people who work in the automotive sector and their families in their hour of need is humbling. So it’s been a great opportunity to raise its profile.

Hosting the challenge over a number of months is unusual – what benefits do you think this has had?
I think it’s given us the time and space to really promote all aspects – electric and hybrid engine development, Ben’s services, the subject of carbon offsetting – something that has been a big feature of the relay, as well as our great network of Lookers dealerships.

Carpool karaoke has been a big feature of the challenge. Have you had a go and do you think you would make it to the X Factor boot camp?
Yes, it’s been a central part of the challenge and a consistent theme. Myself and group financial controller Simon Atkinson did attempt a pretty poor rendition of Electric Avenue, which is our theme song for the challenge. I don’t think we’ll be winning any prizes! My favourite is still the Dublin Used Direct guys who kicked off the tour and sang their version of the song dressed as Batman and Robin!

Why did Lookers focus on electric cars for the challenge?
It’s going to be a revolution in our sector. Within 10 years the majority of all new cars on the road will be electric or hybrid, so it’s interesting to see where we are starting from now. Being aware of the environment and utilising environmentally friendly power sources and sustainable materials is essential to the future of our industry.

What is your personal opinion of electric cars and where the industry is positioned at the current time?
It’s just starting to become a seriously impressive powertrain. With the Jaguar I-Pace and Audi e-tron beating Tesla at its own game, and with ranges of over 300 miles and fast charging of up to 80 per cent in 30 minutes, it is now a more-than-credible alternative to petrol or diesel.

Which electric car would you choose to own and when do you personally think you’ll be ready to become an electric car owner?
I drove a Nissan Leaf for six months when they first arrived in the UK, so I would happily have a Jaguar I-Pace or an Audi e-tron and probably will actually.

What do you think are the main barriers stopping people from going electric?
The main barriers have been range, charging infrastructure and lack of choice. All that’s changing rapidly now.