by James Baggott
in News
0

An uninsured driver had a ‘very bad day’ after reversing their vehicle into a police drone controller’s parked car while they were operating air patrols.

West Midlands Police said that when officers spoke to the driver involved they discovered they had no insurance, tax or MOT.

The driver’s car was seized and the offences reported to court. The force posted on its official Twitter account an overhead photo of the aftermath, taken by the drone, showing the driver being spoken to by an officer.

Uber drivers in UK to get benefits

Uber drivers in the UK are to get a guaranteed minimum wage, holiday pay and pensions.

More than 70,000 drivers, who are now to be treated as workers under UK employment law, will be in line for the benefits – which are set to take effect from today.

Jamie Heywood, Uber’s regional general manager for Northern and Eastern Europe, described it as ‘an important day’ for drivers in the UK, while trade unions bosses said ‘Uber had to be dragged kicking and screaming to do the right thing’ after a long-running legal battle.

Matt Hancock has sought to reassure the public the Oxford/AstraZeneca vaccine is safe, insisting there is no evidence the coronavirus jab has caused blood clots after some European nations halted its rollout.

The Health Secretary urged the public to come forward and get the jab as the European Medicines Agency (EMA) conducts a full scientific review – with France, Germany, Spain and Italy pausing their programmes.

The regulator, which approved the vaccine for the EU, says it currently ‘remains convinced’ that the ‘benefits of this vaccine outweigh the risk’.

Plans to develop the UK’s first hydrogen transport hub have been given a £3m funding boost.

The Department for Transport said the money will support the creation of facilities in the Tees Valley region of north-east England to research and trial the use of hydrogen as a fuel across all transport modes.

A ‘masterplan’ for the site was published today. It could be fully operational by 2025 and help create up to 5,000 new jobs in the region, the DfT added.

Restaurants and gyms not associated with Covid infection, according to report

Visiting supermarkets, restaurants, gyms and leisure centres does not appear to increase the risk of catching coronavirus, according to a report.

The new study by Public Health Wales also says that transmission within households was the ‘most important source’ of Covid-19 infections.

The report is based on evidence from mass testing in Merthyr Tydfil and the Cynon Valley during the height of the second wave of the pandemic between November 21 and when Wales entered lockdown on December 20. 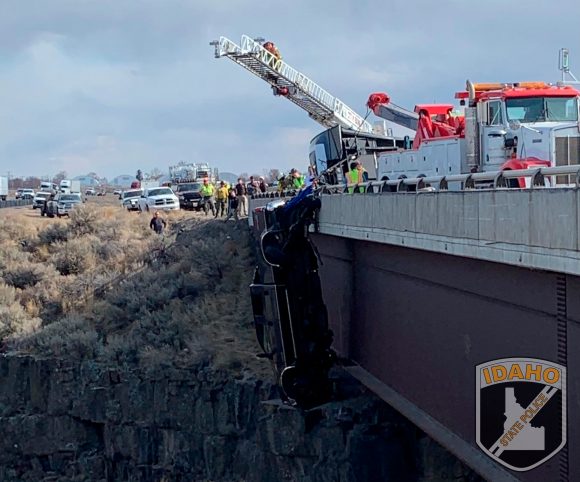 Rescuers save two from pick-up truck dangling over deep gorge

Emergency crews have saved two people after their pick-up truck plunged off a bridge, leaving them dangling above a deep gorge in southern Idaho.

Idaho State Police responded to the accident on Monday and an officer found a man and a woman inside the truck dangling nose-down off the side of the bridge spanning the Malad Gorge, which is roughly 100ft deep.

The only thing keeping the 2004 Ford pick-up from falling was a set of ‘safety chains’ attaching a 30ft camper trailer, which remained on the bridge, to the pick-up. Rescuers with cranes, rope rescue gear and other equipment arrived to pull the occupants out and the car back to safety.

A ‘no-ties’ monthly car insurance subscription service is being offered by the RAC, in a move it says could shake up the market and reduce motorists’ costs.

Drivers who travel fewer miles, perhaps because of the Covid-19 pandemic, may potentially be able to save money.

Rather than being tied to an annual contract, they will pay a monthly subscription, and charges will also depend on the actual number of miles they drive. The product is aimed at people who drive fewer than 6,000 miles a year.

London traders welcomed the agency’s statement that it ‘remains convinced’ that the ‘benefits of this vaccine outweigh the risk’ after a number of EU countries suspended its use.

The number of companies and people applying for insolvency remained low in February, as the government’s business support plans made it possible for even struggling firms to stay above water.

Last month 686 company insolvencies were registered in England and Wales, a 49 per cent drop on the same period a year earlier.

The boss of roadside recovery firm the AA is stepping down after four years amid a changeover at the top following the group’s £2.8bn takeover.

Chief executive Simon Breakwell is set to leave the role to become deputy chairman at the group, just a week after its sale to private equity backers TowerBrook Capital and Warburg Pincus completed.

He will be succeeded by former Lloyds Banking Group senior executive Jakob Pfaudler, once the move is approved by regulators and following a handover, according to the AA.

The Financial Conduct Authority alleges that ‘increasingly large cash deposits’ were made into a NatWest customer’s account, with around £365m paid in – of which some £264m was in cash.

It claims that NatWest’s systems and controls failed to properly monitor and scrutinise this activity. NatWest is due to appear at Westminster Magistrates’ Court on April 14.

The Ford Transit Custom range will include a fully electric model in addition to regular petrol, mild-hybrid and plug-in hybrid versions.

Including both the Transit Custom and Tourneo Custom people mover, the electric van will go into production in the first half of 2023.

It’ll be built in Turkey alongside the new Volkswagen Transporter, with the pair sharing technologies and features following an agreement between Ford and the German carmaker.

A mostly dry day today with a mixture of patchy cloud and bright spells for many, says the BBC. Southeastern areas will see the odd spot of light rain in the afternoon. Staying mild for the time of year.

A largely dry night tonight, with the odd shower possible in eastern coastal areas. Widespread cloud will develop from the north for many, with southern areas seeing the best of any clear spells.

A dull day tomorrow, with widespread cloud persisting. Intermittent showery rain is likely in southeastern areas throughout the day, but elsewhere will remain dry. Bright spells for some in Scotland.