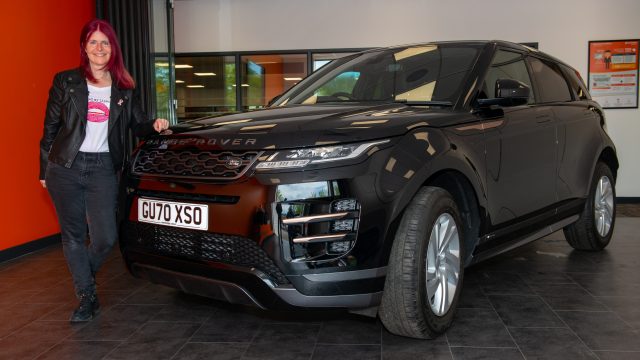 A good samaritan who works with the homeless has won a brand new Range Rover – less than a year after being forced to sell her car due to the pandemic.

Juliette Morrison was the winning entrant in Vanarama’s ‘New Lease of Life’ competition on Instagram Live.

The win marks a major upturn in fortunes for the mum-of-three, who lost her serviced apartment business during the lockdown.

Juliette, who works with homeless charity ‘New Hope’ in Watford, was over the moon with her prize, but was quick to stress other’s have it worse than she did.

She said: ‘Working with the homeless community I can’t say that I’ve had bad luck – I’m lucky to have a nice house and a lovely family and we all have our health.

‘Last year did have its difficulties but there were many others who had a far tougher time than me.

‘Winning the car will make a massive difference though and I’m delighted.’

When she’s not working, Juliette is an ambassador for the Pink Ribbon Foundation – a charity working to support vital research into breast cancer and to support those affected by it.

She spends a lot of her time entering competitions and trying to win prizes – which she then uses to promote the foundation on social media.

She has even given many of her prizes away in competitions but is planning to keep her new motor.

Speaking while picking it up from Vanarama’s Hemmel Hempstead base, she added: ‘It’s so lovely being able to win little prizes here and there and be able to give them away to help other people.

‘But this one’s just for me and I’m going to enjoy it.

‘I was in disbelief and shock and when I told the family they were all saying ‘you can’t have done mum’.

‘In actual fact I still haven’t told anyone just in case it wasn’t true.

‘But now I know it’s all real, I’m super excited and will be shouting it from the rooftops when I get home.’