Home > News > New car registrations up 12.1 per cent in September 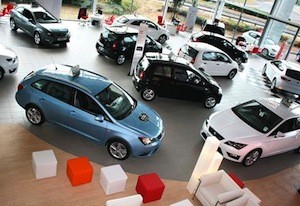 New car registrations up 12.1 per cent in September

NEW car registrations were up 12.1 per cent in September, SMMT figures reveal.

The month saw 403,136 units registered in September – the highest performing month since March 2008.

SMMT chief executive, Mike Hawes, said: ‘The September new car registrations figure was the highest monthly total since March 2008. With over 400,000 new cars registered for the first time in over five years, the UK market is reflecting growing economic confidence.

‘Robust private demand has played a major role in this growth with customers attracted by exciting, increasingly fuel-efficient new models which offer savings in the cost of ownership. This is the 19th consecutive month of steady growth and, with fleet and business demand still to reach pre-recession levels, we believe the performance to be sustainable. The latest 63-plate should deliver success into next year.’

Richard Lowe, head of retail and wholesale at Barclays, said: ‘The popularity of the 63-plate helped new car sales soar. Attractive finance packages are offering consumers more clarity on running costs, which even with a more promising economic outlook is an important factor for those on a budget.

‘As we head into the quieter months, I suspect we’ll see sales hold firm, keeping the UK market zooming ahead of our European counterparts.’

Kia Motors UK’s president and chief executive Paul Philpott said: ‘Throughout 2013 our dealer network has been building on the momentum established over the last few years and now both they and we are really seeing the results of all that hard work.’

He went on to say: ‘September has shown just what potential we have for continued growth in the marketplace and to deliver profitable growth for our dealers.’

September was a record month for Audi. The firm’s UK head of sales Paul Sansom said: ‘Audi UK has achieved an all-time record for its new car sales in September, with literally thousands more cars reaching our customers than at this time last year. The scale of demand for Audi in the UK has never been stronger or more consistent, and despite these record sales numbers our future customer order bank is also at an all-time high.’