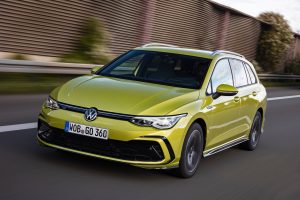 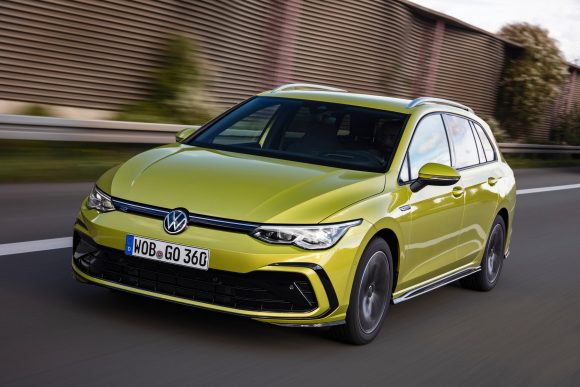 The decision to impose tough restrictions on 99 per cent of England has prompted a furious reaction with Boris Johnson facing a Tory revolt over his post-lockdown plans.

More than 55m people will be placed into Tier 2 and Tier 3 measures when the second national lockdown ends on December 2, meaning mixing between households indoors will be banned for the vast majority of the country.

Only the Isle of Wight, Cornwall and the Isles of Scilly face the lightest Tier 1 coronavirus restrictions. Large swathes of the Midlands, North East and North West are in the most restrictive Tier 3, which accounts for 41.5 per cent of the population, or 23.3m people.

Boris Johnson is facing calls for extra cash to support areas forced into the toughest Tier 3 restrictions amid warnings they will have a ‘devastating’ effect on many businesses.

Andy Burnham, the Labour mayor of Greater Manchester, said the measures – which mean pubs and restaurants have to stay closed except for deliveries and takeaways – would cause ‘real hardship’.

Business groups have said that the new tiered lockdown will be like going into ‘suspended animation’ while waiting for a vaccine to save large parts of the economy. 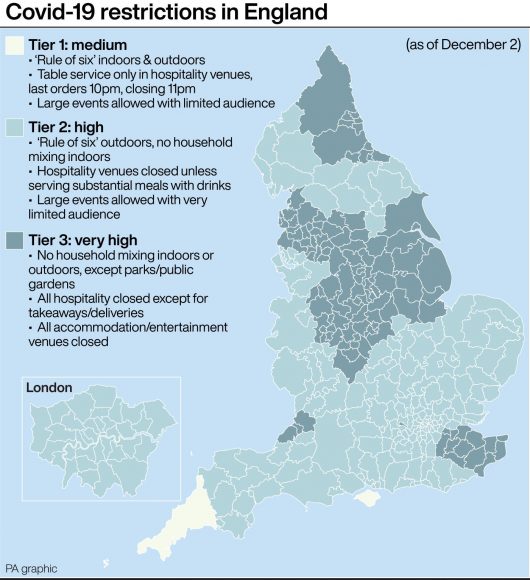 A coronavirus vaccine rollout in the UK could be a step closer after the regulator was formally asked by the government to assess the Oxford University and AstraZeneca jab.

The move marks a significant first step in getting the vaccine approved for deployment if it meets safety, efficacy and quality standards, the Department of Health and Social Care said.

It comes a week after the Medicines and Healthcare products Regulatory Agency was formally asked by the government to assess the Pfizer/BioNTech vaccine.

US President Donald Trump said he will leave the White House if the Electoral College formalises Joe Biden’s victory at the polls.

But he insisted such a decision would be a ‘mistake’ as he spent his Thanksgiving renewing baseless claims that ‘massive fraud’ and crooked officials in battleground states caused his election defeat.

Asked whether he would vacate the building and allow a peaceful transition of power in January, Trump said: ‘Certainly I will. But you know that.’ However, he has made it clear that he will never formally concede, even if he said he would leave the White House.

Drivers across the country submit more than 35 dash cam videos of potential traffic offences being committed to UK police forces each day. In total, more than 52,000 dash cam recordings have been sent to UK police since 2017.

More than a third of the videos of potential motoring wrongdoings have resulted in a court summons, Fixed Penalty Notice, driver awareness course or warning.

A Freedom of Information request submitted to every UK police force by WhatCar? found that more than 10 per cent of the incidents captured via dashcam were severe enough to warrant a court prosecution, while 9.6 per cent resulted in a fixed penalty notice.

42 per cent of businesses unprepared for Brexit

Businesses have been urged to step up Brexit planning after a survey found only 42 per cent believe they are fully prepared for customs changes.

A new competition regime designed to rein in the dominance and power of platforms such as Google and Facebook has been announced.

The Digital Markets Unit will attempt to give people more choice and control over their data, as well as ensuring businesses are fairly treated.

A statutory code of conduct could force platforms to be more transparent about the services they provide and how they are using consumers’ data. It will begin work in April.

London’s top index fared worse than its European cousins yesterday after the government revealed details of new local restrictions that will be put in place next week.

The FTSE 100 fell 28.16 points to end the day at 6,362.93. The new tiers could be seen in London trading where online supermarket Ocado, and gambler Flutter were among the FTSE’s best performers.

On the continent the German Dax and French Cac indexes were uninspired, losing under 0.1 per cent each.

People are being warned to steer clear of ‘too good to be true’ tax avoidance schemes which set up complex arrangements for paying their income, as action is taken to cut out misleading marketing around them.

HMRC and the Advertising Standards Authority said they have launched joint action to help protect people from being presented with misleading adverts which may tempt them into tax avoidance.

They said promoters are being required to be clear about the potential consequences of tax avoidance in any online advertisements.

Volkswagen’s practical Golf Estate has gone on sale priced from £24,575.

The estate version of the latest eighth-generation Golf features a variety of engine and specifications, while a simpler trim setup means there are now just three to choose between – Life, Style and R-Line.

In addition, an Alltrack model is also available, bringing a powerful diesel engine and all-wheel-drive as well as a seven-speed automatic gearbox. Prices for the Alltrack start from £35,560.

This morning there will be fog lingering across areas, but some dense patches which will eventually lift, says the BBC. The best of the sunshine will be in W Wales while there will be patchy rain over N Ireland and NW Scotland.

This evening will be fairly chilly across areas and mostly cloudy with some scattered light showers across the country. There will be clear spells over N England and S Scotland, where mist or fog patches may form.

Tomorrow will be mostly dry and cloudy with some mist, hill-fog and patchy drizzle in places. The best of the sunshine will be in N Scotland and SE England. It will feel milder in the south in comparison to the north.