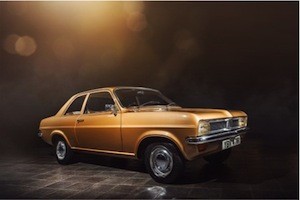 PERRYS is holding a charity auction that will see a 1970s Vauxhall Viva go under the hammer in order to raise money for charity.

The dealer group aims to capture the infamy of the 70s by auctioning off a 1977 Vauxhall Viva 1300L, as part of their Miles 4 Smiles auction event, which will see all money raised go to Bluebell Wood Children’s Hospice.

The Vauxhall Viva is the very car that Elvis Costello once sang about in his song The Beat, and this gold example (pictured right) has just 11,000 miles on the clock with only two owners from new – including Perrys.

As well as the car, there will also be a number of other prizes to bid on including football tickets, signed shirts and ‘money-can’t-pay-for experiences’.

Today, Perrys will embark upon a nationwide tour in the Vauxhall Viva, which will start in Huddersfield and onto five other locations across the UK.

At each stop, there will be a variety of events and fun activities open to the public including raffles, face painting and of course the opportunity to bid for the Viva.

Bidders will also be able to try for a selection of other lots including an Apple iPad and a steering wheel singed by Sir Stirling Moss – bidding either in person or via auction website eBay.

Sales executive, David Totty, the very man who sold the Viva in 1977, said: ‘The Viva was an exciting car at the time. As a sales executive the Vauxhall Viva was a great car to sell because of its unique appearance. This particular model is still in such great condition – today it really is a rarity. I remember the excitement of the previous owner when he first purchased it, hopefully the next owner will feel the same.’

Ken Savage, chairman at Perrys, said: ‘I have fond memories of the Vauxhall Viva, my mum used to pick me up from school in her Viva. It’s very unusual to find a car such as our Viva in such great and original condition and I really hope it goes to somebody who will really appreciate it. I am delighted to be able to use the car to raise money for such a worthwhile cause.’