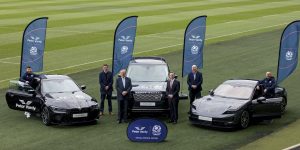 In a four-year deal commencing this summer, the Peter Vardy Group’s name and logo will feature on the 2021/22 season team kit in a wide ranging partnership.

The dealer group will also be the back of shirt sponsor for Scotland 7s from the 2021/22 season and Edinburgh Rugby car partner, with branding also included on the capital pro-team kit.

Peter Vardy Group boss, Peter Vardy, said: ‘As a Scottish family business we are very proud to be the principal partner of Scottish Rugby.

‘We have long been keen supporters of Scottish Rugby, both commercially and as fans and I believe we share similar values.

‘We have built our business on passion, ambition, courage, and we see that lived out by these fantastic athletes every time they pull on the blue jersey. We are incredibly proud that our brand will be recognised with our national rugby team.

‘Commercially, of course, it is a fantastic opportunity to promote our brands across the UK and globally; over eight million people watched the recent Scotland versus England game – that level of exposure is massive for us.

‘Coming off the back of some exceptional performances from Scotland in the Guinness Six Nations, we are really excited about what the future holds for Scottish Rugby and now as principal partner we look forward to working together.’

Scottish Rugby’s chief executive, Mark Dodson, said: ‘We are delighted to welcome a respected and widely known Scottish business in Peter Vardy into the top level of our sponsor family.

‘They have been great partners with us in the recent past and it is a testament to their vision and connection to rugby that they will now be seen on a global basis on the front of Scotland’s national team jersey.

‘I’d like to thank Peter and his team for their support to Scottish Rugby so far and look forward to working with them in the coming years as we bring this new partnership to life.’

Scottish Rugby’s chief operating officer, Dominic McKay, added: ‘The whole of sport has been impacted by the effects of the Covid-19 pandemic, so it is especially pleasing to move into the new season with a new principal partner in Peter Vardy.

‘As a dynamic family business Peter Vardy has shown a fantastic commitment to our sport at a challenging economic time and having a Scottish company connected so closely to our national team makes this new partnership even more special.

‘We hope this prominent sponsorship will deepen its connection with customers in Scotland and take the company’s profile to a wider international audience in the years to come.’