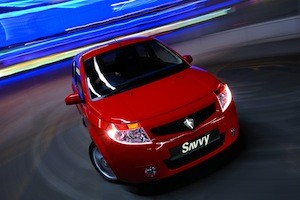 DELVE deeper into September’s sales figures and look past the double-digit rises for the likes of Mitsubishi and Subaru and you’ll find quite a shock.

Judging by the SMMT’s sales chart, Proton is in trouble – and in a big way.

Throughout the crucial month of September the Malaysian firm registered less than a handful of cars. Three shiny Protons rolled out of dealers’ showrooms last month to customers – three!

To put that into perspective, that’s the same number Saab has managed to shift all year – and that company went bankrupt nearly two years ago. And when you take a look at the company’s year-to-date performance it doesn’t make for much happier reading either as Proton has managed the round total of 18 units. That’s down 90.86 per cent on the same period last year when Proton registered 197 cars.

So how has it gone so horribly wrong? We approached Proton UK to get some answers but they cancelled the interview just two hours before the agreed time. The reason? ‘Launch planning meetings are overrunning’.

They issued us with a statement that was predictably vague: ‘We can confirm that Proton will be launching three exciting new Proton models in the coming months and we believe with these new models we will improve our position as well as our sales performance.

‘Once our launch plans are finalised, we will be communicating these to our dealer network.’

‘We closed last year due to the shortage of stock and felt it was the right decision to make.’

But perhaps Proton’s management needs to communicate this message to its dealer network more quickly. We chose five dealers at random and wanted to ask them how bad the current situation was. Three refused to have their comments published but none was positive about Proton’s future. Two however did and laid it on thick. One said: ‘We have actually given our notice to Proton that we will be dropping the franchise. They have been dangling the idea of introducing new cars for some time and there are new products in the pipeline, but we felt we didn’t want to wait. It actually pushed us to taking on Kia, which has been a really great move for us.’

Another said: ‘We are no longer a Proton dealer. We closed last year due to the shortage of stock and felt it was the right decision to make.’

Proton’s current state is a far cry from how it began 30 years ago. The car company, now owned by DRB-HICOM, started out in its home country of Malaysia in 1983 and produced the country’s first domestic car. By the late-1980s, imports began to arrive in the UK initially through Lada dealers, and once the 1990s dawned Proton became the fastest-selling new car brand ever with more than 22,000 cars sold in just two years.

With the early-’90s recession doing its best to help the UK new car market slump to a 20 per cent low, Proton was riding a crest with sales up 30 per cent. Its simple model range of the MPI saloon and Aeroback (hatchback) used old Mitsubishi products and was priced up as cheaply as possible. The firm took advantage of a growing gap at the bottom end of the market – a gap that was ever-widening thanks to Japanese cars becoming more expensive – and UK buyers were hooked.

More products arrived throughout the 1990s and the firm even took advantage of holding the keys to Lotus, giving a sporty makeover to its insipid Mitsubishi Colt-based Satria hatchback. With a tweaked chassis and beefed-up bodywork, the Satria GTi received rave reviews from the media and created a loyal fan base.

Nowadays, the firm doesn’t produce anything as so proudly flamboyant as the GTi. Instead, its range consists of three lines: the cheap but unremarkable Savvy city car; the even more unremarkable Satria Neo supermini; and the desperately old Gen-2 hatchback, saloon and an LPG variant. There has been the promise of new product in the shape of a saloon and an MPV called the Exora, but it would seem that some dealers couldn’t wait any longer.

However, there is some good news in this story. One retailer has faith and is looking forward to the future – Richard Smith, MD of one of the longest-serving Proton dealers in the UK, Golden Hill Garage in Leyland, Lancashire.

‘Proton is set to introduce more than three brand new models this year and beginning of next,’ Smith told us. ‘I’ve already been to a confidential meeting at the HQ in Bristol and driven the new cars – the introduction of new models will really freshen the brand.

‘Proton isn’t about the badge or rising prices – all the cars are full-spec from standard.’

On the question of the dismal sales figures, Smith replied: ‘We haven’t been selling cars because we’ve had a shortage of products – basically we sold our last lot of stock too quickly, so had to stop marketing. If anything, Proton and ourselves have been too successful – perhaps a bit too big for our boots in a way – and we have a very positive outlook.

‘Next year, we look to sell more than 100 cars – that’s just a rough idea as we don’t know what the volume figures will be. We expect Proton cars to be selling like hotcakes early in 2014.’

It would seem to us these new products and a bucket-load of cash for marketing exploits cannot come soon enough. Proton’s current situation is an interesting one – one that we will be watching closely over the next few months.