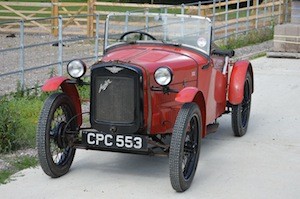 THIS classic vintage two-seater makes a good investment as well as a fun purchase.

It’s not everyday you come across a vintage car, especially one that’s still roadworthy and has had just three owners since it rolled off the production line in 1935.

That’s right, this little 80-year-old Austin Seven, which is kept in a temperature-controlled garage, has had only three owners within a 50-year period and counted up just 29,048 miles on the clock – or at least that’s what the car itself thinks.

The Austin’s previous owner was an elderly gentleman who kept the car for a groundbreaking 38 years. According to Ben Boxhall, director of the car’s new owner, The Bright Ideas Factory Vr3 Prestige, he enjoyed every moment of it.

So much so, he took this vintage classic on an adventure by loading his gramophone into the cockpit and taking his friend on a trip from Oxford to France. It was on this journey that they paid a visit to a number of Austin motor clubs, with their classic music on full volume.

‘This is a quirky little car and as far as I’m aware its previous owner was quite an eccentric,’ said Boxhall. ‘He actually took the Austin to France and back, where he visited Austin Seven Clubs with his gramophone attached to the back.’

Handyman and manager David Lewis at The Bright Ideas Factory Vr3 Prestige, said the only reason the gentleman was selling the Austin Seven was simply because it was no longer practical for him. ‘As far as I’m aware, he really enjoyed driving the Austin Seven but due to his age, he started to struggle getting in and out of it,’ says Lewis.

The little Seven has undergone a full bodywork conversion and, as a result, is in top condition. ‘It originally started life as a saloon but changed to an Austin Special in the 1970s,’ Lewis explains. Although the Austin has undergone some serious upgrades, it still has a number of original features, making it a beautifully-built vintage two-seater.

‘The chassis, engine, gearbox and front axle are original parts and I love taking it out on the road – I’ve driven it numerous times and as a niche market there will be someone out there who is desperate to buy this car,’ says Lewis.

The Austin also has something of a racing background, competing in both sprints and hill climbs. Lewis, who has spent much time working on and driving the Austin, still takes the car on a number of track day events – even if it does only just manage to reach 40mph.

‘I’m a member of the 750 Motor Club and I’ve done a few hill climbs and sprint events in the Austin,’ he says. ‘It’s definitely a Sunday car or a little toy to have sat in the garage – I even take it on track days just to have a bit of fun

It’s also important to remember that this little beauty is exempt from MOT and road tax, allowing drivers to enjoy stress- free, roof-down motoring in a truly wonderful example of automotive heritage.

And while it’s sitting in the garage, it could be growing in value. ‘Vintage and classic cars are of course a specialised market,’ says Boxhall. ‘Customers often invest in these cars, rather than just buy them, because they usually continue to increase in value.’

It’s still equipped with its original log books and has evidence of service history. The car is currently waiting for a new owner to take it on hill climbs or simple summer picnics.