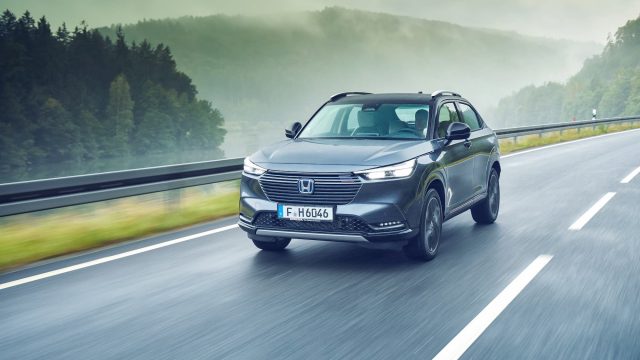 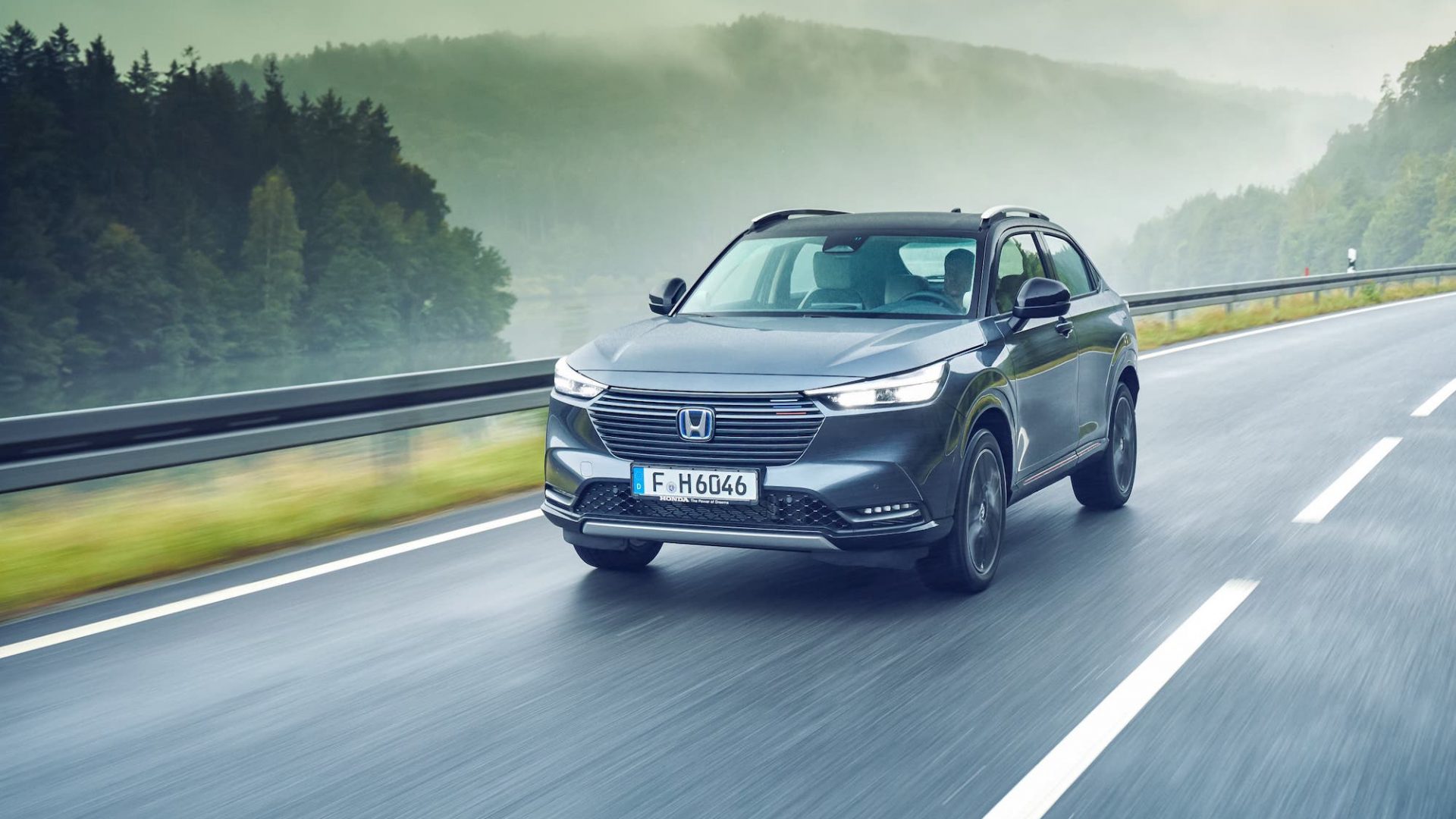 Honda has introduced a third-generation hybrid version of its popular HR-V crossover with prices set to start at £26,960.

However, in such a competitive market, has the Japanese car got what it takes to come out on top with buyers?

To find out, our man Ted Welford jetted off to Frankfurt to get behind the wheel.

Though there are never-ending promises from car manufacturers of ‘we’re going electric by X date’, a marque truly beating many to the curve is Honda.

By the end of this year (when its outgoing Civic is taken off sale), everything it offers will either be a hybrid or EV.

Next up on the electrification ladder is the HR-V – Honda’s mid-size crossover – that now enters its third generation.

It’s a rather important addition, not least given this market accounts for 25 per cent of new car sales in the UK.

But does this new model have what it takes to stand out?

This is no half-baked effort as there’s little from the old HR-V that’s been carried over to this new model.

Gaining a bolder and more stylish design than before (which we’ll explore in detail later), it’s also available exclusively as a hybrid, using Honda’s ‘e:HEV’ system.

Elsewhere, there’s a full suite of safety assists added (many of which come as standard), while a new infotainment system promises big leaps compared to the old system – though, to be blunt, it certainly couldn’t get much worse. 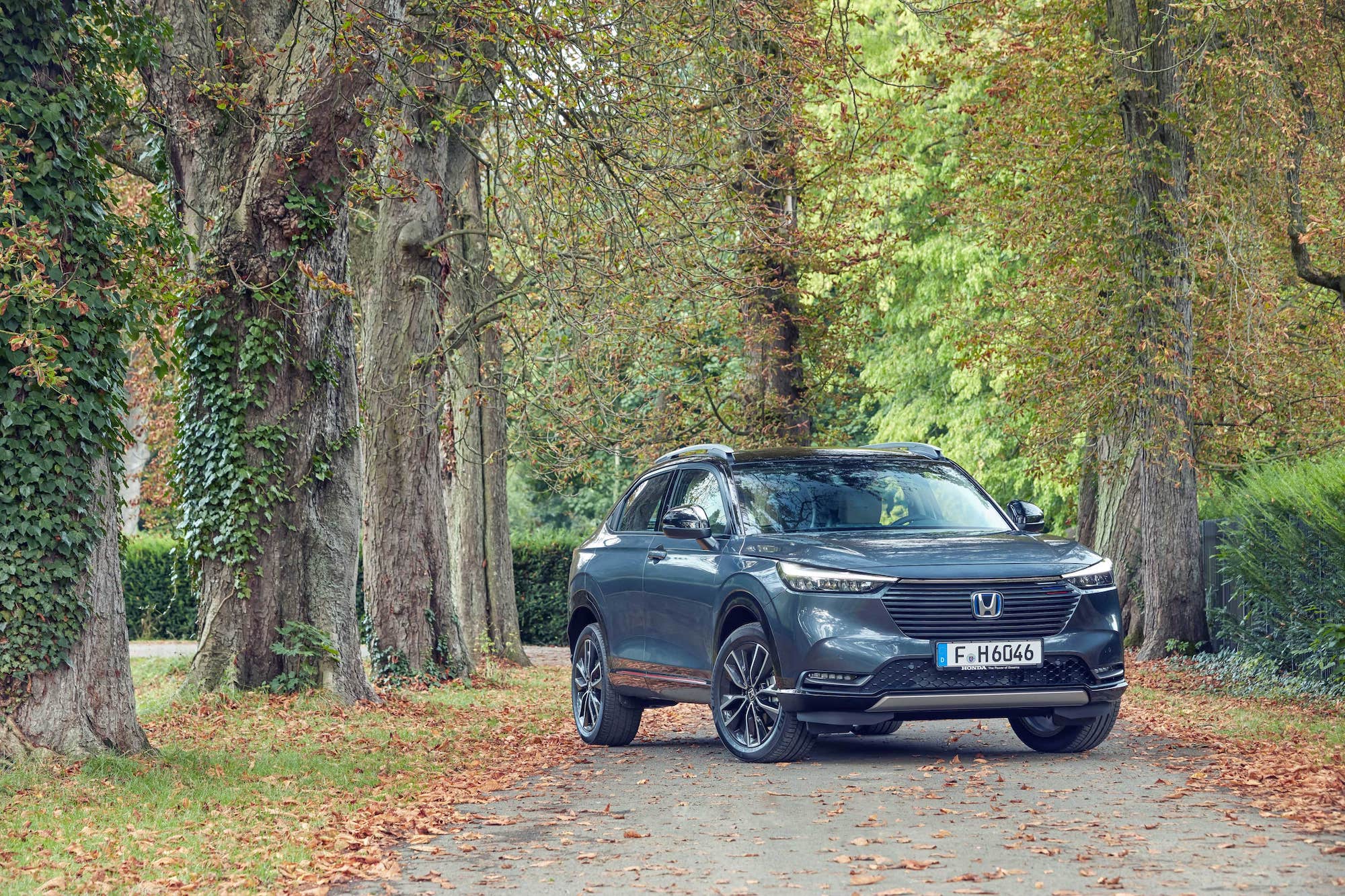 Honda started out with the same setup as the one you get in the Jazz (which was only introduced in mid-2020), and then added additional power and battery cells for more efficient driving.

Using twin electric motors and a 1.5-litre Atkinson cycle petrol engine, the power increases from 106bhp in the Jazz to 129bhp here, while putting out 253Nm of torque.

An e-CVT automatic gearbox is used, with power always being sent to the front wheels. Performance is adequate, if not brisk, though few owners will grumble at a 10.4-second 0-60mph time.

Its efficiency will likely be a higher focus, with Honda claiming up to 52mpg, and CO2 emissions of 122g/km.

Honda has managed to pack 25 per cent more cells into the battery compared to the Jazz, and the result is much-improved electric driving capabilities.

Unlike other hybrids of this kind, the HR-V will quite happily pootle around town predominantly on electric, while great visibility and a decent low-speed ride make it a solid urban runabout.

Meanwhile, out on the open road, the HR-V is safe and secure, and though the body is kept in-check through sweeping corners, it’s somewhat lacking in feel – if not uncommon in this class.

Everything is smooth and linear, if not quite as involving as the experience you’d get with a Ford Puma.

The main weakness with the HR-V though is the lack of refinement from its powertrain. Put your foot down, even relatively mildly, and it becomes unpleasantly loud – almost roaring, and we don’t mean that in a good way.

It feels all at odds with the HR-V’s otherwise relaxing experience. 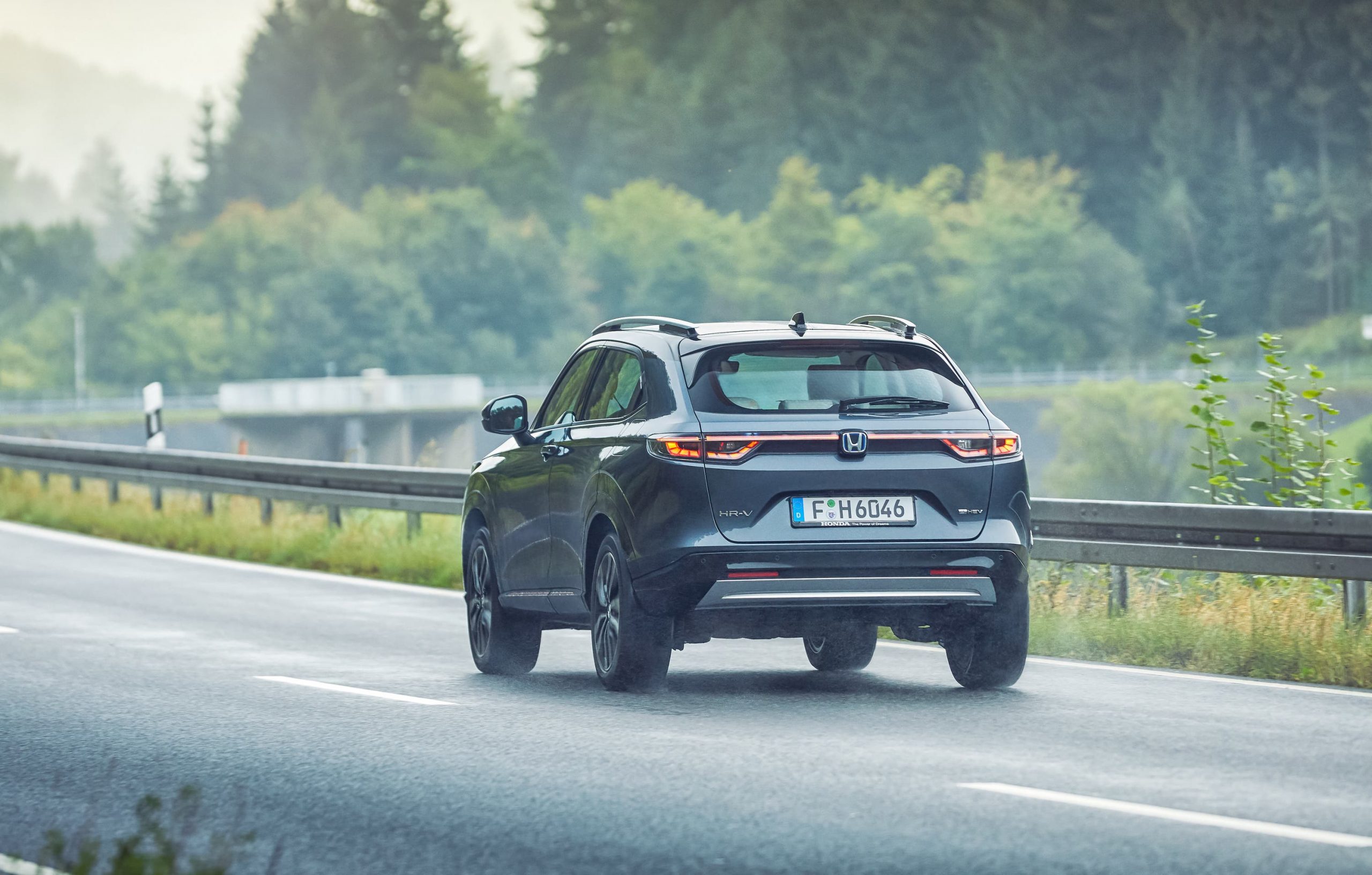 The last HR-V wasn’t what you’d call exciting to look at, so Honda has aimed to inject plenty of extra appeal here.

In fact, you’d struggle to tell if it was even related to its predecessor, with particular highlights including the body-coloured grille, which gives it a really striking and unique look – no easy accomplishment in this class.

The sloping rear window also helps to give the HR-V more of a ‘coupe’ like look, if not quite to the same degree as a Toyota C-HR or Renault Arkana.

Honda has really stepped up the interior quality of its HR-V, with the model having a far more premium look and feel than before.

Our top-spec Advance Style model was especially plush – getting smart grey upholstery, a cream dashboard and orange accents as standard.

A new nine-inch touchscreen is tremendously improved compared to before, with Honda saying that new shortcut buttons reduce the time it takes to carry out functions by half.

It’s also positioned pleasantly high up, meaning you don’t have to stare down to look at it like you do in some rivals. Another highlight is a clever new air diffusion system that flows air around you, rather than firing it directly at your face.

Like the Jazz, the HR-V also has versatility as a priority. It retains Honda’s acclaimed ‘Magic Seats’, which fold completely flat and can also up like cinema chairs – allowing taller items to be kept in the rear footwell.

Although rear legroom is especially generous, headroom isn’t all that good – someone six feet will be scraping their head against the roof lining, while the boot (at 319 litres) is really quite small by class standards. 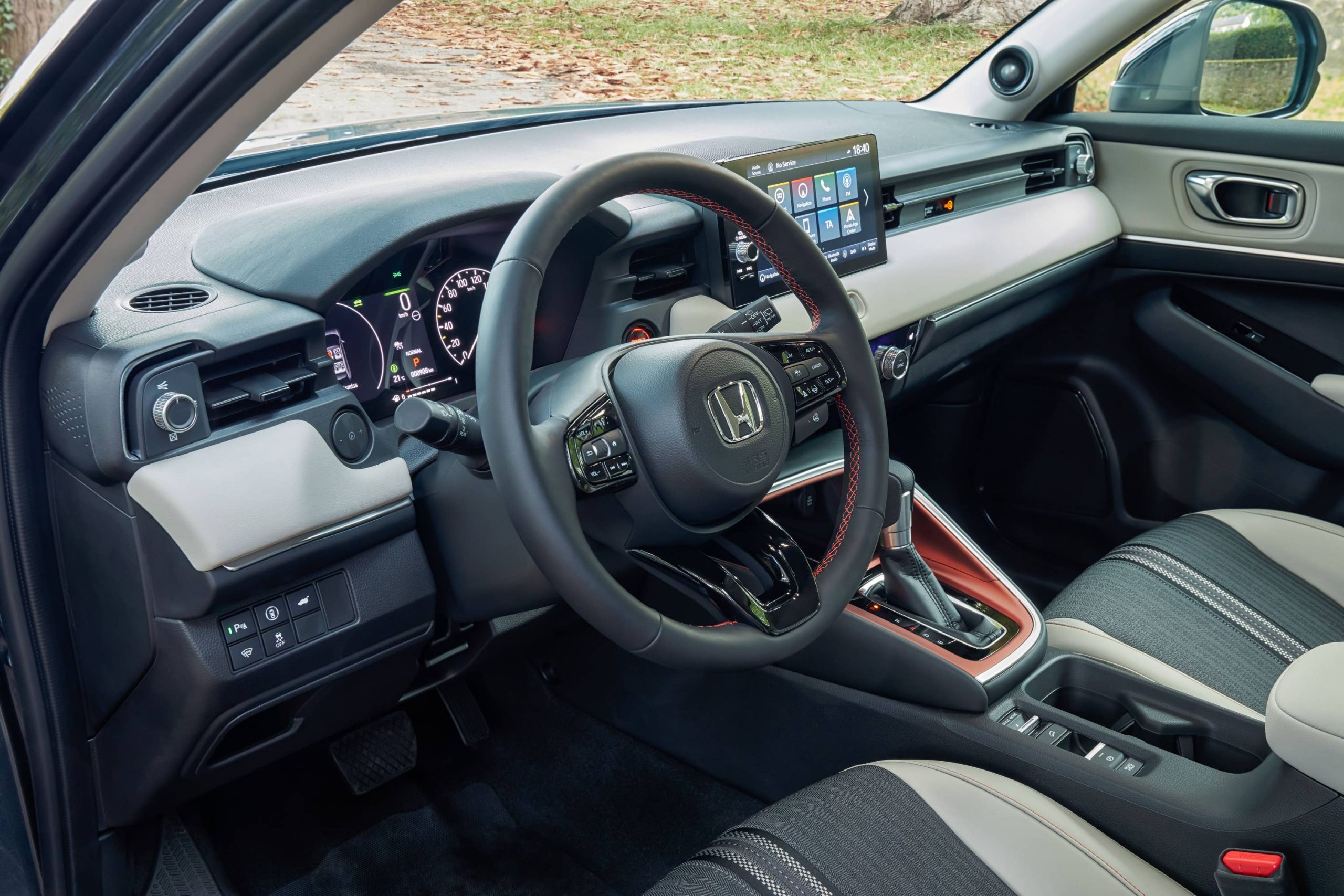 The HR-V range offers three trim levels, with the Elegance kicking off the line-up with its £26,960 starting price.

It’s far from entry-level in terms of equipment, though, with highlights including heated front seats, LED headlights, a digital dial display and a nine-inch touchscreen.

At the top of the range sits the Advance Style, which – as its name suggests – is focused on style, packing a two-tone paint scheme, roof bars and a grey and orange interior ambience. At £31,660, it is quite pricey in this grade, though.

Where comfort, versatility and quality are concerned, the Honda HR-V is a great choice, and it will appeal to those looking for a more relaxed driving experience, or as either an upgrade from a Jazz or downsizing from a CR-V.

It’s not quite the well-resolved car it should be, though, with a shouty, and quite unrefined hybrid powertrain taking away from what otherwise is a very competent crossover.

Make no mistake, the HR-V is still a solid choice, but in a seriously competitive market, it just doesn’t do enough to stand out from the best.