Home > Car News > Review: Is the Tesla Model Y the most appealing electric crossover on the market? 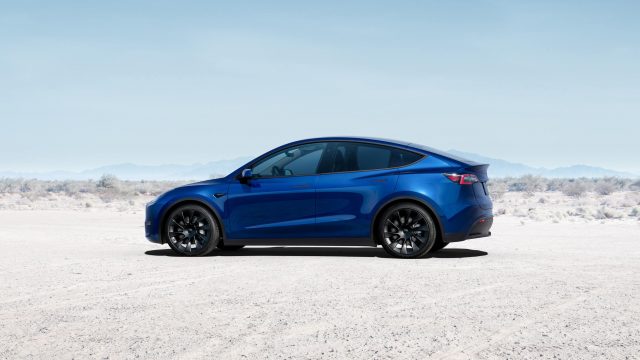 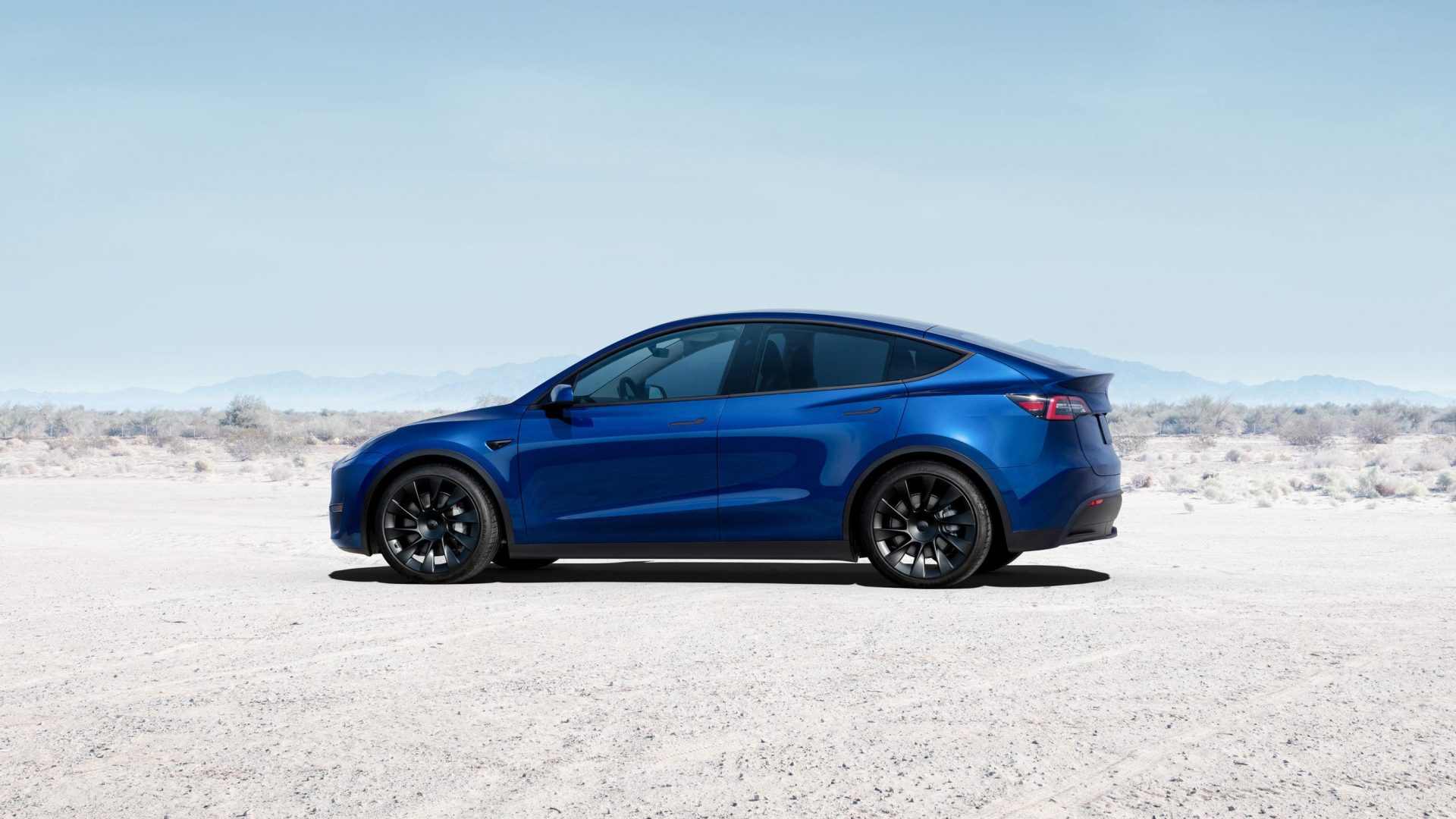 Review: Is the Tesla Model Y the most appealing electric crossover on the market?

Tesla has brought the Model Y to the UK after becoming the latest manufacturer seemingly unable to resist the draw of the crossover-SUV.

The American firm has already hit the ground running with the Model X, but it is now looking to tap into the more compact end of the spectrum.

It is based on the popular Model 3 – which was the most-sold car in Europe during September – but is it any good?

We sent our man Jack Evans to find out. Here is what he had to say…

What you’re looking at here is essentially a Model 3 with some more space. It’s significantly taller than the 3 overall, with the bulk of this taken up by an increase in body height which results in improved headroom and more boot space.

In fact, the Model Y can – between the front ‘frunk’ and folded-flat rear seats – offer 2,158 litres of space, which is around the same as you’ll find in BMW’s gargantuan X7 SUV.

We’re driving the entry-point ‘Long Range’ version here, though a performance model will also become available shortly, bringing more – ahem – performance, for those who want a Model Y with even more zip. 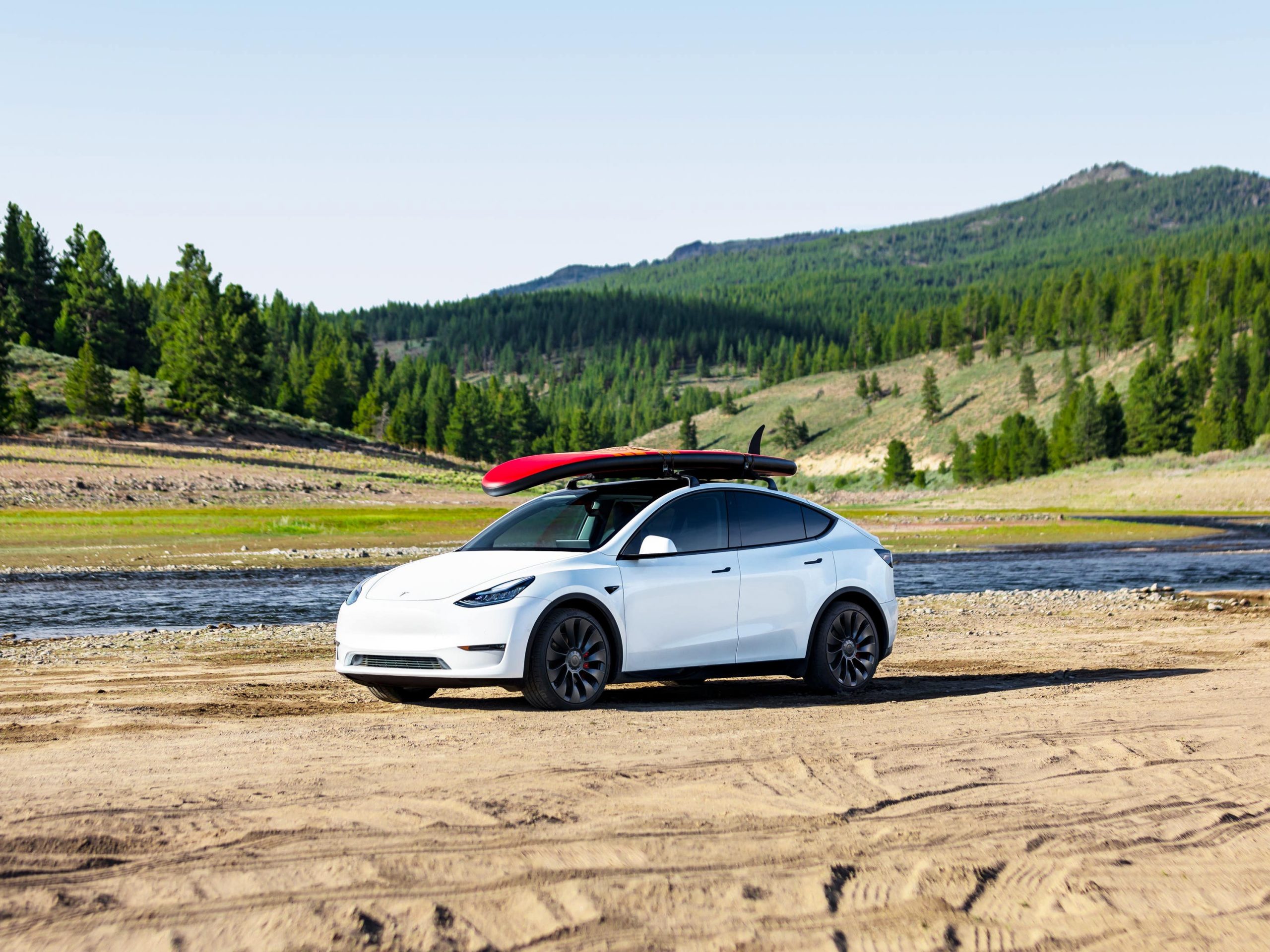 All versions of the Model Y utilise a dual-motor setup, giving the car all-wheel-drive and improved traction in poor conditions. In total, the setup in the ‘Long Range’ car produces a healthy 434bhp and 575Nm of torque, resulting in a sprightly 0-60mph time of 4.8 seconds and a top speed of 133mph.

These motors are combined with a 79kWh battery to give the Model Y a range of up to 315 miles. It’ll also charge at speeds of up to 250kW and, of course, ownership gives you access to Tesla’s 6,500 Europe-wide charging points.

One look at the firm’s UK map shows that there really are Tesla chargers dotted along most major trunk roads. 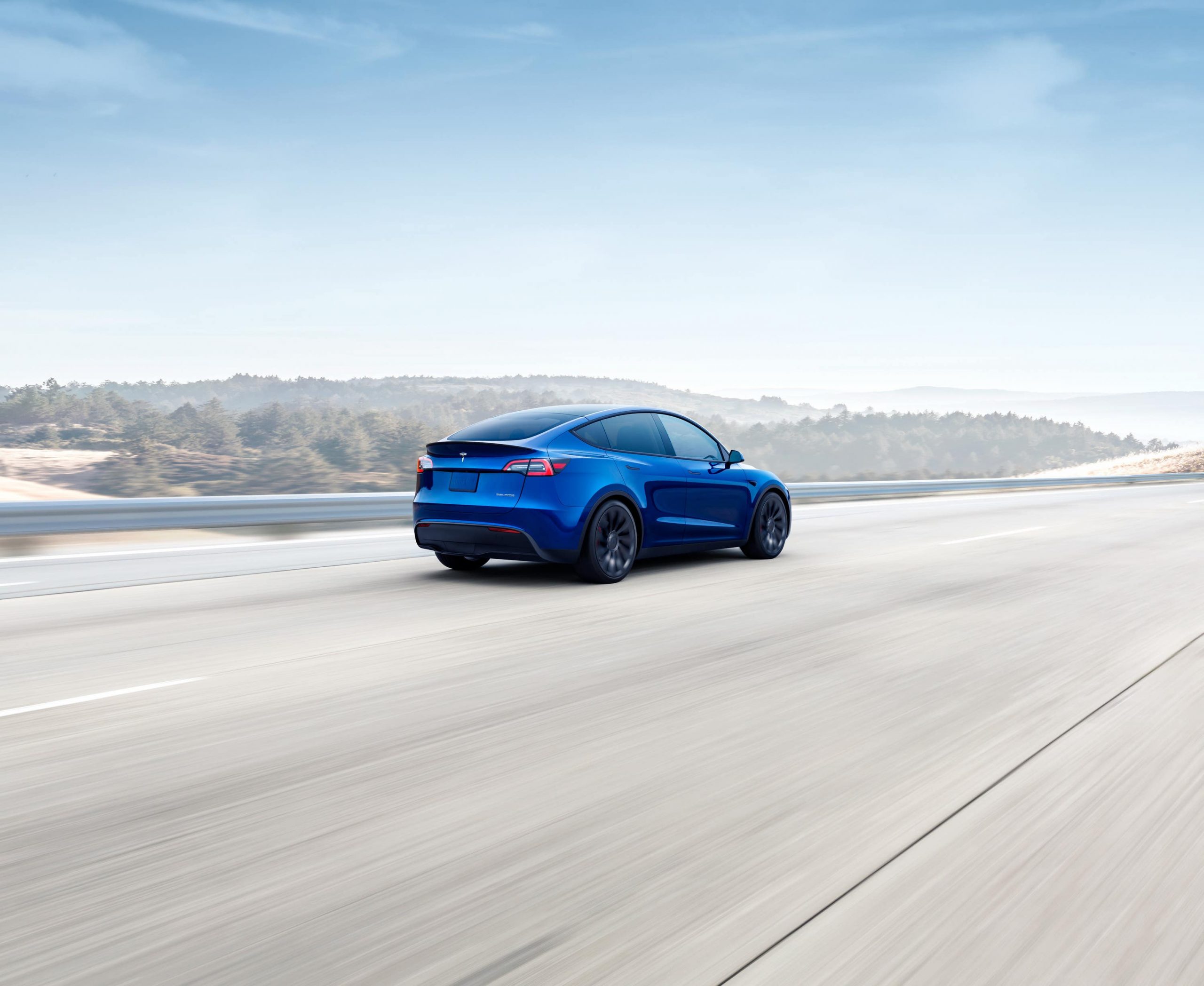 There’s no key required with the Model Y. Most users will use their smartphone to access the vehicle, so all you need to do is get in, click the car into drive and you’re away. It’s a little alien to begin with, but you soon get into the swing of things.

There’s a huge amount of performance on offer here and, though the Model Y is a touch slower than the Model 3 due to additional weight, it feels more than powerful enough for daily driving.

It is hampered by an overly firm ride, mind you. ‘Our’ car rode on optional 20-inch wheels and these, combined with quite a stiff setup, means that the Model Y tends to crash through potholes and over imperfections. It’s a hiccup in what is an otherwise good dynamic setup, with pleasant steering, a decent level of refinement and a smooth, efficient powertrain that feels in its stride at all speeds.

Out driving the new Model Y on a frankly tremendous day pic.twitter.com/SYeMtQoff0

It’s difficult to take a stance on the way the Model Y’s looks, because it’s fair to say that the exterior design of this car is quite plain. It isn’t overladen with features like other EVs, so it’s quite hard to say whether it’s a success or not.

Of course, looks are down to the individual, but given the rather plain approach to design it’s likely that few will find genuine fault in the way the Model Y looks. It does, in fairness, bring added appeal over the Model 3 due to its slightly raised stance which gives it more presence on the road – though the ultra-narrow rear screen does impede rearward visibility quite a lot.

The interior of the Model Y is just like the one you’ll find in the Model 3 – stripped back, calming and well-judged ergonomically. There’s plenty of adjustment to be found in both the seating and wheel (the latter of which is conducted through controls within the large screen) while access to both the frunk and boot is simple and easy. The underfloor storage in the boot will be particularly useful, too.

Those sitting in the rear of the car are treated to plenty of head- and legroom, while all three rear chairs benefit from heated seats – something which will no doubt go down a treat when the temperatures drop. The general lack of buttons – save for those for the windows and doors – does give the cabin a clean feeling overall, too. 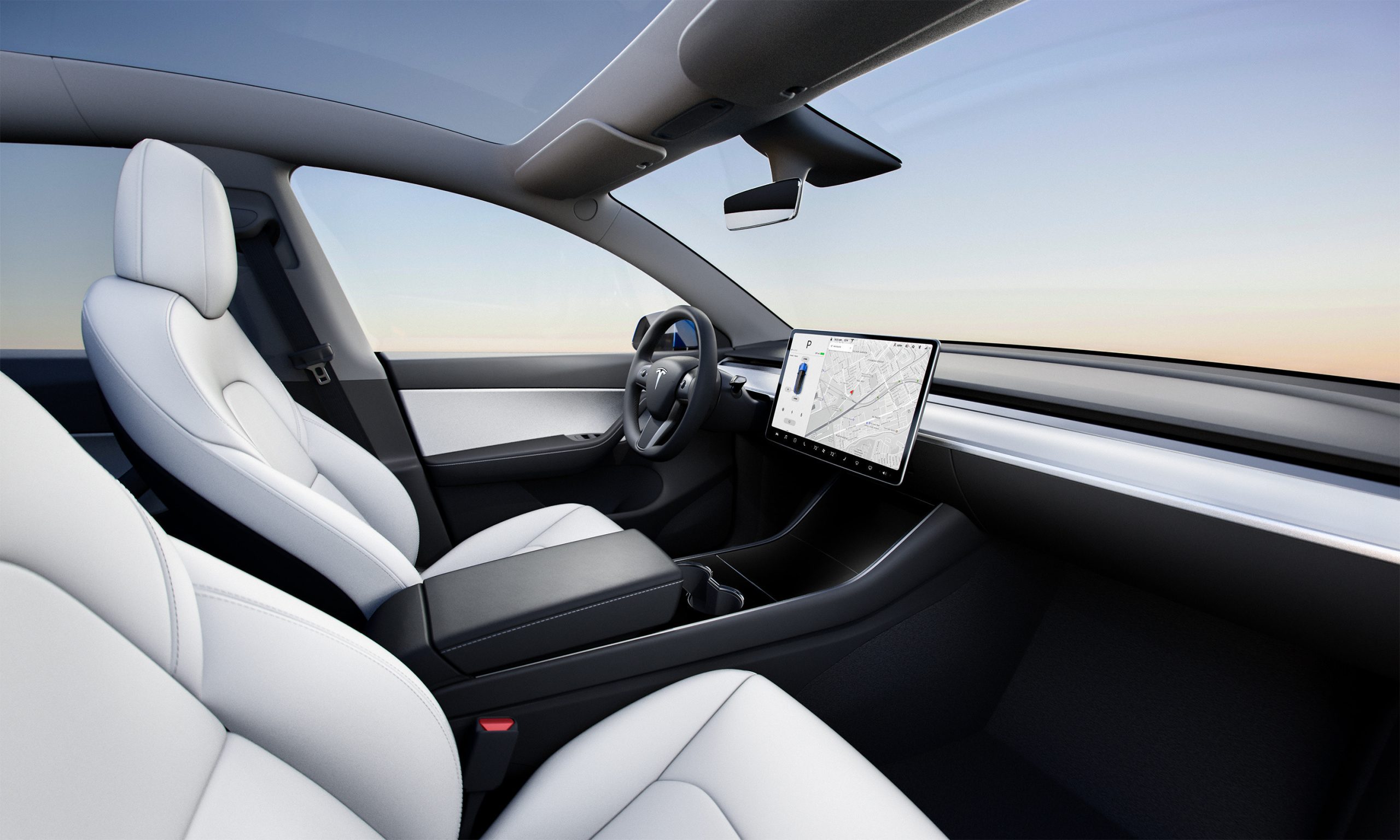 If there’s one thing Tesla knows how to get spot-on, it’s technology. You’ve got the same uber-large central screen in the Model Y as you do in the Model 3 and it’s wonderfully engineered, with razor-sharp graphics meeting an equally intuitive operating system. There’s a great sense of fun to it all too, with games and features showing that cars don’t have to be serious all the time – and it’s all the better for it.

But even run-of-the-mill functions like the satellite navigation work seamlessly and easily point you in the direction of your nearest charger without fault. The integration of streaming platforms such as Netflix means you’ve got something to watch while you’re charging, too.

The Model Y feels like a natural progression for Tesla. With prices starting from £54,990 it’s certainly not cheap, but given that essentially everything is included as standard – with only the larger wheels and a different type of interior trim the major options to add – it comes in as better value than many of its competitors. Steer clear of the larger wheels and it’ll be more comfortable, too.

Add in the access to an established and reliable charging network and you can see how the Model Y will no doubt go down a treat with buyers. Take a look on the roads today and you’ll see them awash with Tesla models and the Model Y confirms this popularity is only set to continue.