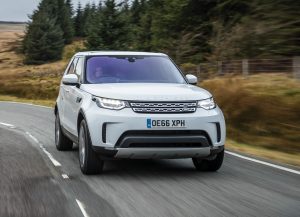 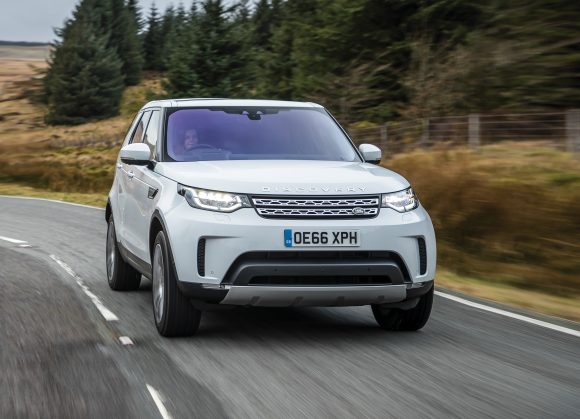 As far as new cars go, this is pretty momentous. The previous-generation Discovery was around for seven years, and was one of Land Rover’s most popular models of all time. With its space, safety and peerless off-road ability, it wasn’t hard to see why so many people chose one. Now there’s a new one. Though powered by the same 3.0-litre diesel V6, it’s lighter and more efficient than ever. Still offering seven seats, it’s just as practical as before and even better off road – which should make it an incredibly popular car with a wide range of buyers.

Our test car came fitted with a 3.0-litre turbocharged diesel engine, producing 254bhp and an impressive 600Nm of torque. It’s the same engine that featured in the old Discovery, but because the new car has been on a bit of a diet – it’s 250kg lighter in fact – it’s more efficient. Land Rover claims you’ll

get 39.2mpg, although you’ll likely see a slightly lower figure. Engine response is good, and the whole car whisks forward effortlessly quickly. There’s little engine noise transferred to the cabin too, which makes it a far more relaxing car to drive. A 237bhp 2.0-litre ‘Ingenium’ diesel is also included in the range, and this will be the best bet for those looking for higher economy figures – the claimed consumption figure is 44.8mpg.

With prices starting from £43,495, the Discovery isn’t a cheap car to begin with – and that’s before you’ve even gone near the options list. Our car, in HSE Luxury specification, came with 21-inch alloy wheels, electronic air suspension and cost £75,570. Other options included a television (an £880 option) and head-up display – again,  a pricey extra at £1,035. You do get a large amount of standard equipment – especially on high-end specifications – but the Discovery is a fair bit more expensive than you (and your customers) may expect.

Thanks to that lower weight, the Discovery certainly steers and handles more keenly than its predecessor. It feels lighter on its feet than the outgoing model, while the V6’s silky response perfectly suits the character of the car. There’s a small amount of body roll still, though this is to be expected given the Discovery’s height. Off road, the Discovery completely surpasses expectations. We tested the car at Land Rover’s off-road facility at Eastnor Castle in Herefordshire, and not once did it fail to deal with the stickiest of situations. Deep water, thick mud and steep inclines were dispatched without a moment’s notice, despite it wearing road tyres. If you’re looking for a car capable of handling all conditions, then the Discovery is ideal.

Autocar’s reviewer said: ‘From the outside, I really thought they’d screwed it up. And I do think Discovery 3 and 4 will become standout classics in future. But make no mistake: this is one of the world’s most capable cars.’ Auto Express commented: ‘Regardless of where you stand on the looks, it’s impossible to ignore the new Land Rover Discovery’s enormous breadth of talents.’ The Sun said: ‘The new generation is every bit as capable in the mucky stuff [as its predecessors], but they’ve also created a beautiful space inside. This Disco can dance to any tune.’

The Discovery really is all cars to all people. It’s practical, sturdily built and well-finished both inside and out. It also has the underlying off-road capability that you’d expect to find in a Land Rover – something proved to us on some difficult terrains. It’s expensive, there’s no doubt about that, but for those who want a peerless all-rounder, then the Discovery is ideal.