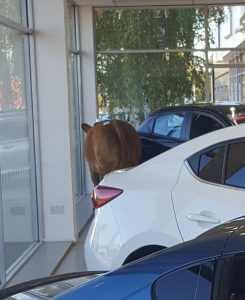 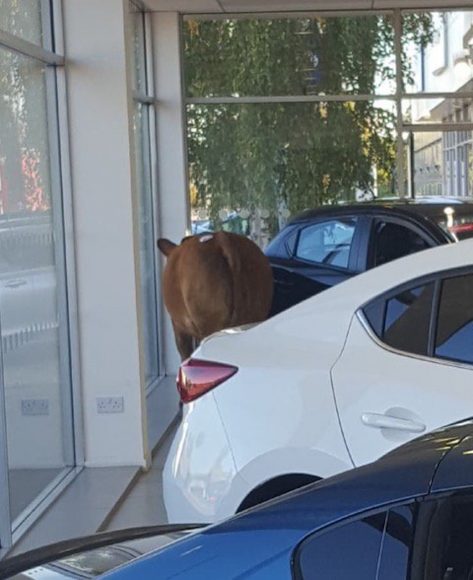 AN escaped cow’s 20-second rampage in a car showroom caused damage worth £1,500.

The animal had managed to flee from a cattle mart about a mile away from Arnold Clark Stirling Mazda.

After arriving in the forecourt and lurking for a while, the cow then managed to find its way into the showroom, crashing into a window and damaging a £23,000 Mazda MX-5.

Telling The Scotsman about his ‘bizarre’ experience, sales manager James Merrins said: ‘We were standing in the showroom then I saw one of my guys running towards us shouting ‘‘cow cow cow’’.

‘Next thing you know, the cow was in the showroom and it looked as calm as you like. But when the automatic doors shut behind it, it began to panic and that’s when we all ran for it into the offices because there was no way of stopping it.’

Caledonian Marts has agreed to reimburse the dealership, and Merrins, 39, added: ‘I even got a lovely bottle of whisky as an apology.’

A spokeswoman from Police Scotland told The Scotsman: ‘The cow was injured. However, no one else was harmed and the animal was returned to the auction house.’

It isn’t the first animal of its kind to go on the run in Stirling – the M9 was closed on April 19 because of a cow that was loose on the road.

MORE: VW to usher in new era of buying cars