SOUTH COAST-based Snows Group has reached a new milestone today as it adds two dealerships to its portfolio, making a total of 30 in the business.

The group has acquired two Toyota dealerships in Chichester (pictured above) and Waterlooville from WKB Group, as director David Kilby has taken the decision to retire from the business after 25 years. 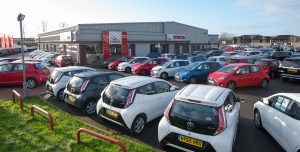 WKB Chichester and Waterlooville join the six existing Snows Toyota dealerships already in operation across the South and South West of England. The Group already has a presence in the surrounding area, thanks to BMW, Mini and Seat dealerships located in Portsmouth, where the group has been involved in the motor trade since the 1980s.

Snows group has announced that for the foreseeable future, both Chichester and Waterlooville will continue to trade as WKB Toyota, though under the management of Snows Group.

Maddison said: ‘Toyota Chichester and Waterlooville join our growing number of Toyota franchises, enabling Snows Group staff to assist a wider community with their expertise. Both new and existing customers at WKB Toyota will now benefit from the advantages that come with being attached to a large dealer group, including increased buying power and access to a greater volume of used vehicle stock.’

MORE: Revealed: The fastest-selling used cars, according to cap hpi

MORE: Watch the latest news from the automotive industry in one video