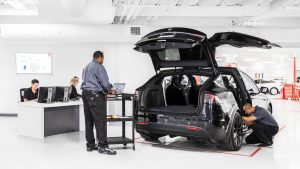 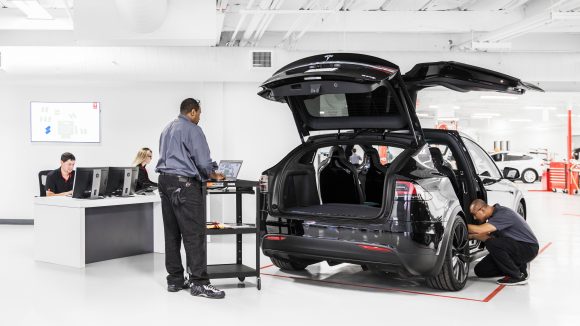 Tesla has opened four more sales locations in the UK already this year as its rapid growth continues.

Fuelled by buoyant sales of the Model 3 – the UK’s most popular electric car – the American brand has opened the new sites.

Tesla refuses to call them dealerships, referring instead to them as ‘Tesla Locations’. They’re been opened in Aberdeen, Cardiff, Nottingham and Chester.

The four new sites bring the total number of new properties to 10 for the brand in the past 12 months.

There are currently 26 Tesla Locations in the UK, with 19 service centres – 16 of them have showrooms – and seven are retail-only.

The new Tesla Centre in Aberdeen is now the most northerly for the firm in the UK.

It has a service bay for up to three cars and offers eight Superchargers.

Meanwhile, Cardiff is the firm’s first location in Wales, and offers servicing for existing owners as well as test drives for prospective customers.

Both Nottingham and Chester offer servicing for Tesla owners, with the former having four Superchargers outside.

All Tesla car buying is done online, whether you buy in-store or at home. The company has also implemented contact-free test drives, with paperwork completed over email so you can arrive and drive.

With a well-established online buying process, Tesla wasn’t hit as hard as some manufacturers when dealerships were forced to close by lockdowns.

The Tesla Model 3 regularly appeared in the monthly top 10 sellers list throughout 2020, despite electric vehicles typically selling in small numbers. In December it was the best selling car.

In March 2021, it was the fourth-best-seller, with more registrations than big-hitters like the Nissan Qashqai, BMW 3 Series and Volkswagen Golf.