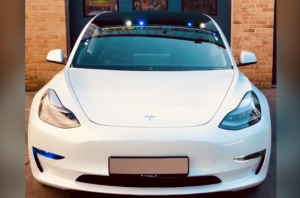 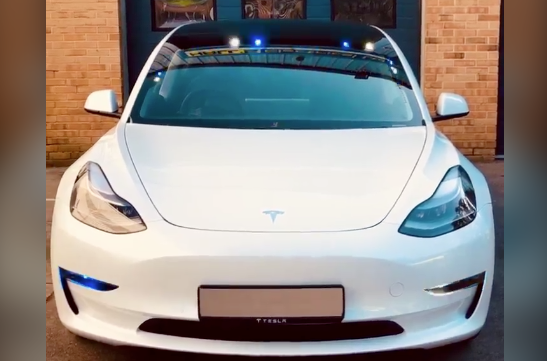 It’s the quiet arm of the law – could UK police forces be about to upgrade to Tesla police cars?

The Tesla, complete with blue and white flashing lights behind the windscreen and in the light fittings, certainly looks the part.

While details on who the car was made for it looks like Tesla has built the prototype to show off its wares to UK emergency services.

It is believed Tesla is in talks with several forces and a fire brigade to put the Model 3 through its paces.

With petrol and diesel cars banned from sale from 2030 onwards, emergency services are going to be forced to opt for electric motoring – and the Model 3 could be the perfect solution.

He said: ‘Public sector vehicles need to move to full EV in order to achieve the #UK #roadtozero – an #emergencyresponse Tesla Model 3 offers unbeatable range, performance and safety for our public sector workers.’

A number of police forces around the world already use Teslas. A Model Y is being used in New York – the first of its type when it entered service in December.

Other police forces in the States have claimed that Model 3s make great squad cars with the EVs ‘paying for themselves’ in less than two years.

Police chief Todd Bertram said: ‘Two big things that we were looking at when shopping for cars were obviously cost and performance.

‘Many times when you get a car that is in our cost price range, you sacrifice performance. With Tesla, the performance is better than the cars we are currently driving. It’s amazing, it’s smooth, it’s powerful, it handles great.’

The force said it saved around $6,000 dollars a year per car on fuel as well as other savings compared to combustion engined models.

At the end of 2019, it was reported that police forces across the UK had bought less than 500 electric cars which were mostly used for bosses to get to work.

Reports in the Metro claimed officers said they took too long to charge to be ready for pursuits, and that they was too much risk they’d run out of power before then end of a shift.

That might not be the case with Tesla as they have notoriously longer ranges and an excellent network of fast chargers across the country.