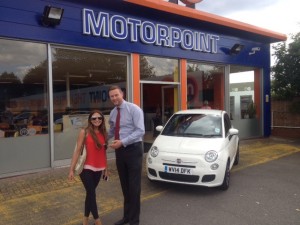 THE only way is Motorpoint for Grace Andrews – the latest recruit to the hit TV show The Only Way is Essex.

Grace took time out from filming the ITV2 reality series – also known as Towie – to travel to Motorpoint Chingford to buy her new car – a 14-reg Fiat 500 1.2S in ultra-stylish Bossanova White.

The 22-year-old, who has already become a firm favourite with fans since making her debut in the show earlier this year, had been recommended to Motorpoint by friends and made the short journey from her home in Buckhurst Hill to visit the site on the Lea Valley Road in Chingford.

Robert Jones, sales manager, said: ‘Grace has been a fan of the cute, retro-inspired looks of the Fiat 500 for some time and fell in love with this particular 1.2S version as soon as she saw it.’

‘Grace was an absolute pleasure to deal with,’ added Robert. ‘We look forward to welcoming other stars of the show to Motorpoint over the coming weeks and months.’

Generation Z is itching to spend its stockpiled cash on buying a car, new research finds