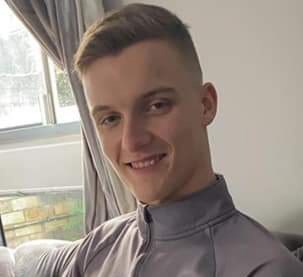 Tributes having been pouring in to a young dealership worker after he was killed in a horrific late-night car crash.

Jay Morrison, 19, passed away hours after his red Vauxhall Corsa veered off the road in Glasgow on the night of September 17.

The tragic teen had been working at Taggarts Volvo in Hillington, Glasgow, prior to his death.

He was rushed to rushed to Queen Elizabeth University Hospital but died in the early hours of Saturday morning.

His heartbroken family have now been paying tribute to him in a series of emotional posts on social media.

His father, Kenny – a former soldier – also thanked the emergency services for their efforts to save his son’s life.

He wrote: ‘As you are probably aware my son Jay Morrison lost his life in car crash on the 18th of September 2021.

‘It was attended by the police, I have no idea who the officers were who attended and were first on site. These 2 officers who probably get abuse every time they are on duty, did not know my son or me or any of my family.

‘They gave Jay a stranger to them CPR for 15 minutes until medical help arrived. This selfless act by these officers allowed me, my wife and my family some of whom travelled up from England, the precious time we needed to be with him before he passed.

‘I do not have the words to tell them how grateful we are to them for affording us that opportunity.

‘Thank you so much for the gift you gave my family and Jay time to say goodbye.’

Taggarts Volvo, where Jay Morrison worked before his death

‘If love alone could of kept you, you would have lived forever’

Another of the touching tributes to the 19-year-old came from his older sister, Demi.

She described him as ‘such a gentleman’ and ‘the best uncle’ to her two sons.

Demi said: ‘My beautiful little brother one the hardest things I’ve ever had to do, was watch you go. I’m so glad you waited for us all and I had the short time with you. I’ll never understand how life works.

‘You grew into such a gentleman and the best uncle the girls could ask for, along with the best brother.

‘I don’t know how I’m going to tell the girls or even how I’ll cope these next few weeks without ever seeing you again.

‘If love alone could of kept you, you would have lived forever.

‘My darling baby brother sleep tight till we meet again.’

Police Scotland have confirmed enquiries into the circumstances of the crash remain ongoing.

Anyone with any information that could assist the investigation should contact police on 101 quoting incident number 4182 of Friday, September 17, 2021.

Sergeant Kenny Malaney, of Police Scotland’s Glasgow Road Policing Unit, said: ‘Our thoughts remain with the family and friends of Mr Morrison at this difficult time.’