UK Drive: The new Mazda MX-30 brings fun to the EV segment but can buyers look past its lower range

Mazda’s first EV aims to retain the firm’s renowned traits but for the digital age, but can it succeed? Ted Welford finds out

It’s a sign of just how important electric cars are becoming when firms such as Mazda begin to make EVs. This car maker is deeply rooted in its combustion-engined models, and remains committed to enhancing and innovating petrol units.

But with electric cars accounting for a greater share of new car sales than ever, their increasing importance can no longer be ignored – hence the arrival of the new

MX-30. It’s aiming to do things a bit differently to other EVs, but will this direction pay off? 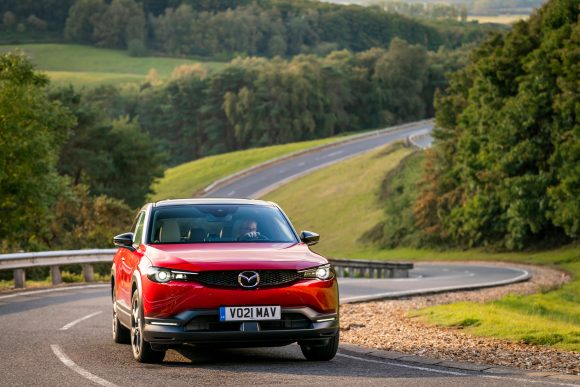 With Mazda’s SUVs now accounting for more than half of its sales, it’s unsurprising the MX-30 adopts this body style and that it is based on the brand’s latest CX-30 crossover.

So while its powertrain is quite clearly new, Mazda has tried not to lose any of its cars’ traits that customers love – a great driving experience, plenty of style and a long list of standard kit.

Much of this has been achieved by using a small battery – just 35.5kWh, which is the same size as small electric city cars like the Seat Mii Electric. That allows for a claimed electric range of just 124 miles, though the brand is quick to point out that the average Mazda owner drives just 26 miles per day, while customers also get a free wallbox so they can charge at home.

The battery is the bit that adds significant weight to an EV, so by using a smaller one, it means the MX-30 isn’t quite so heavy as competitors.

And the 35.5kWh battery itself is joined by a 143bhp electric motor – allowing for a 0-60mph time of 9.5 seconds and a max speed of 87mph. Despite the claimed electric range, though, our largely rural test route suggested something closer to 100 miles. Granted, many drivers won’t do that many miles in a single day often, but it still delivers one of the worst ranges of any EV on sale today, and well behind rivals like the Peugeot e-2008 and Hyundai Kona Electric. 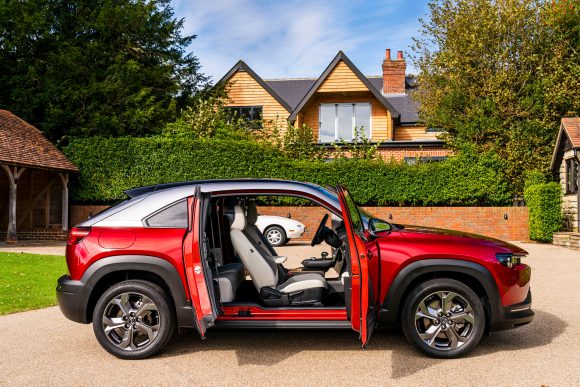 But for all the criticisms about the poor electric range, that lighter battery means the MX-30 does drive particularly well, and is definitely better than its aforementioned rivals in that respect.

It doesn’t feel as porky as its 1,645kg weight suggests, while its agility feels closer to that of a petrol hatchback than an electric crossover. In true Mazda fashion, it’s very well judged, with direct steering that inspires you to push on through the corners, while the smooth and refined powertrain adds to the appeal – there’s even a cool futuristic sound pushed in through the speakers. It doesn’t feel quite as zippy as other EVs – particularly from a standstill – but it delivers all the performance most could ask from it.

And despite riding on a set of larger 18-inch alloy wheels, the ride remains compliant, too, both around town and at higher speeds as well.

While styling will always divide opinion, we reckon the MX-30 is a seriously cool thing to look at. It gets Mazda’s renowned ‘Kodo’ design language, but gets a modern reinvention, because EVs don’t require the same cooling as a regular petrol model they can do without quite so many grilles.

The side profile is also fantastic – particularly on our test car that came with the firm’s trademark Soul Red Crystal paint colour, black roof and grey side panels.

It’s also laden in thick black plastic cladding – something you also get on the brand’s CX-30. For us, the cladding-to-paint ratio could have been toned down a bit, but given buyers love this chunkier SUV styling, it will likely appeal to many. 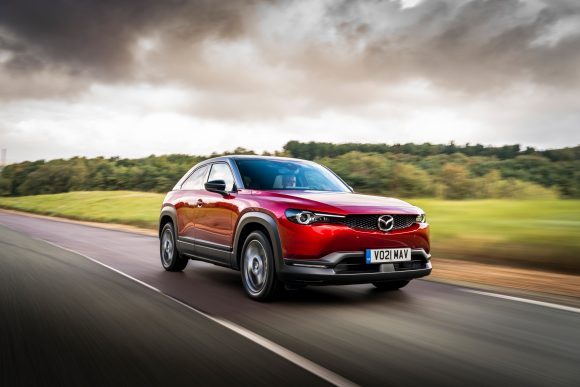 Mazda interiors have seriously improved in recent years, and the MX-30’s is no exception. The quality is fantastic, while there’s a clever use of materials and textures throughout, such as recycled plastics, ‘eco’ leather and even cork. The latter might seem a strange one, but it’s a nod to Mazda’s history, with this firm producing cork long before it considered turning its hand to cars.

Another of the MX-30’s quirks are its rear-opening doors – as seen on the Mazda RX-8 sports car from the 2000s, and BMW’s electric i3, too. Though they certainly look cool, they’re not especially practical in day-to-day use, while few rear windows means the back seats can feel a bit dark and dingy, in contrast to the light and airy front seats.

One of the key benefits of using a smaller battery is that it really helps to bring the cost down. So, including the government’s EV grant, the MX-30 starts from £25,545. It makes almost £5,000 cheaper than rivals from Hyundai and Peugeot (though they can admittedly travel far further on a charge). It’s also not that much more expensive than Mazda’s petrol CX-30, which costs from £24,440 in the same SE-L Lux grade.

The level of standard kit is generous too, with all models coming with 18-inch alloy wheels, LED headlights, adaptive cruise control and a reversing camera. It’s not lacking on tech, either, with an 8.8-inch infotainment system included, alongside a new screen that handles the climate settings – something you’re more likely to see on top-end Audis and Land Rovers.

Our optioned-up GT Sport Tech test car pushed the price up to £31,845, though it did come absolutely laden with features, including a 12-speaker Bose sound system, heated steering wheel and an electric driver’s seat. 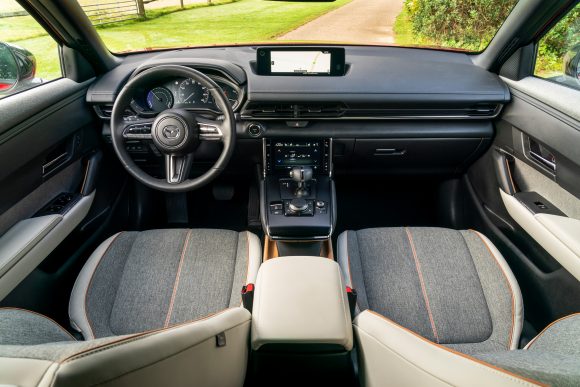 Mazda’s first EV was always going to be something a bit different, and with the MX-30’s focus on the drive and quality above outright electric range, it’s safe to see this is a rather different electric car to most.

The MX-30’s weak electric range will always be the sticking point and the turn off for a good chunk of buyers. So, if you’re regularly undertaking longer trips, one of its rivals remains a far better option.

But if you don’t travel far, or are looking for an electric second car, the MX-30 is well worth considering, and more so given its affordable price and fantastic styling.

Comment: Closing Vauxhall’s Ellesmere Port factory so soon after Brexit will not give a great impression