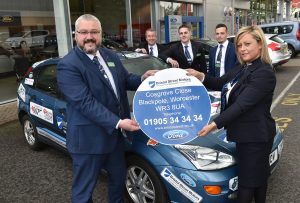 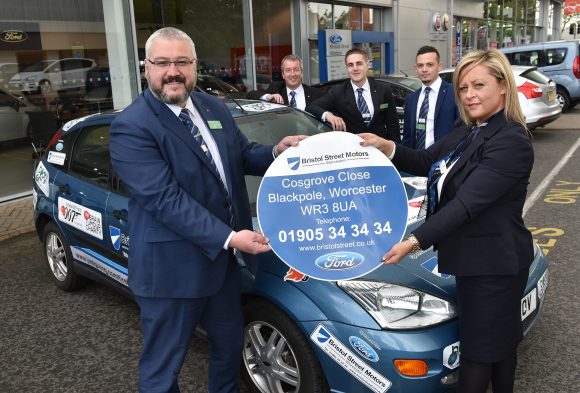 A DEALERSHIP in Worcester has helped a customer get into gear for a charity car rally across Europe, to raise money for the Brain Tumour Charity.

The service team at the Cosgrove Close dealership carried out work on David Pritchard’s 15 year-old Ford Focus to prepare it for the James Bond Challenge – a four day-long motor rally through eight European countries, driving the most challenging and awe-inspiring mountain passes featured in the film franchise.

Pritchard is taking part in the challenge, organised by charity rally specialists Fireball Rally, to raise money for the Brain Tumour Charity in memory of his motor mechanic father, who passed away last year from a brain tumour.

Stuart Lamb, general manager at Bristol Street Motors Ford Worcester, said: ‘We’re only too happy to help David prepare for the James Bond Challenge, especially as he’s doing it for such a worthwhile cause.

‘It’s not always about donating money; we donated our time and expertise to support David and were more than happy to do so.

‘A lot of the cars that take part in Fireball Rallies are bangers and David’s was no exception. It took a lot of work, but now he’s ready to hit the road and raise lots of money to fund research into brain tumours. We wish him the best of luck.’

Pritchard added: ‘I bought the car from a friend for £100 as he was just going to scrap it. It had no MOT and needed great deal doing to it to get it road-ready.

‘I know that it will have taken a lot of work for the car to pass its MOT, so I really appreciate Bristol Street Motors helping me out. It’s helped keep the cost as low as possible meaning more money can go to the charity.

‘After my father passed, I knew I wanted to do something for the Brain Tumour Charity in tribute to him. As he was a mechanic, and spent his whole life in the motor trade, a charity car rally seemed like a fitting tribute.’

You can support Pritchard’s fundraising adventure by donating to his Just Giving page.

On SuperUnleaded.com: From Supermini To Supercar In A Minute, Car Rig Is A CGI Wonder