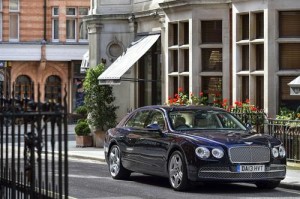 ENGLISH-based Premiership footballers appearing in the World Cup are set to splash the biggest amount of money ever on luxury cars – whether they win or lose.

Magnitude Finance has 13 of the England squad on its books as clients and is preparing a range of finance packages ready for the end of the tournament regardless of whether players receive their win bonuses, understood to be in the region of £350,000 per player.

The most popular cars being lined up include the Range Rover Autobiography and more extreme supercars such as Lamborghini Aventador LP700-4 Roadsters, Ferrari 458 Spiders an F12 and a Bentley GTC.

Director at Magnitude Finance, Tim Marlow, said: ‘From the proposals we’re putting together, it promises to be the largest amount of finance provided for our footballer clientele during a summer – regardless of how England fares in Brazil.

‘Many of the England squad and Premiership-based players representing other nations are looking to buy new cars either to mark a good tournament or a treat after a long season.

‘They’ll have a lot of time on their hands in between matches and we know they like to browse cars on the web and play around with the finance figures which is why we developed an online calculator to let them configure accurate quotes for the make and model of every luxury car that’s available.

‘We then provide a concierge service that tailors the quote to the individual’s circumstances and preferences with a view to getting the acceptance in place ready for the transaction – speed is critical for fast turnaround times.

‘For example, one option we’ll create will have a large deposit – the highest we’ve received was £80,000 on a £120,000 Bentley Flying Spur – while others will look for an interest-only deal over a short term of two years so they can change their car more regularly.’

Magnitude Finance has funded more than 10 vehicles for one of the current England players giving him a credit line of more than £500,000 so he can buy whatever he wants with finance pre-arranged.

‘We have to be ready to react and turn deals around quickly because they don’t forward order; if they want a specific car they will come home from the World Cup and go out and buy it – they’re very impulsive that way,’ adds Marlow.

‘There’s also a lot of competition among them – they all want to have the best, most exclusive car to show their teammates and to out do each other, which often sees additional body kits and big specification extras being ordered.

‘In late June we normally see a flurry of activity as players start buying so they can turn up in a new, jaw-dropping car on the first day of pre-season training.’