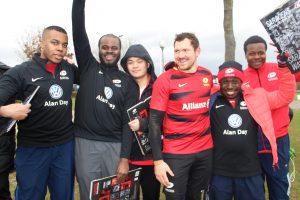 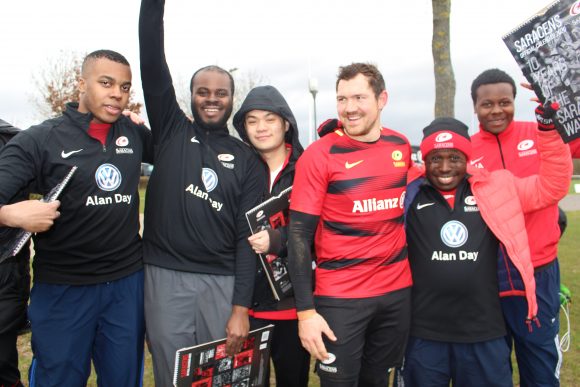 THE Alan Day Group helped a group of young adults with learning disabilities enjoy a great rugby-themed day out recently.

The young people, aged between 14 and 24 years old, were taken to watch a Saracens first-team training session at Old Albanian RFC in St Albans, Hertfordshire.

They had the opportunity to play touch rugby alongside their first-team heroes and were presented with club calendars which all the players then autographed.

The youngsters were already well-versed in the game as they are involved in a pioneering scheme that helps young people with high-functioning disabilities such as autism, Down’s syndrome and ADHD be more active and play rugby for a team that regularly completes at mixed ability festivals.

Supported by the London-based Alan Day dealer group, sessions take place on a regular basis. The chance to meet the first-teamers was an extra bonus and everyone got a huge amount out of the experience.

One of the players involved, Saracens and England fullback Alex Goode, 31, said: ‘This is such an amazing initiative and there’s such great energy among the kids.’

The visit to the training ground was organised through the Saracens Sports Foundation.

The regular sessions for the young people involve members of the Alan Day Group, including managing director Paul Tanner, giving up their time for free to help coach the youngsters at Saracens’ Allianz Park ground while parents and friends watch from a hospitality lounge.

The scheme has become a tremendous success and Tanner said: ‘I’d like to thank everyone for their continued support and commitment.’ He added that the recent trip to the training ground was the first of its kind and that the boys had really enjoyed it.

MORE: Come along to CDX and YOU could win two tickets to the Used Car Awards