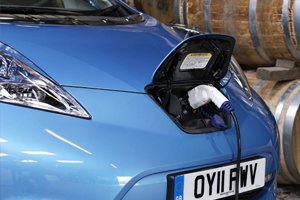 As part of the £37m scheme, the Government has announced that it will contribute 75 per cent to the cost of installing a charger at a home address anywhere in the UK.

As well as the home charging bonus, the Government has announced some other major benefits for the entire charging network.

Working with local authorities, the new scheme will see a 75 per cent contribution to the cost of installing public chargers on roads or in car parks.

In addition, the Government is contributing 75 per cent towards the cost of installing charging points at railway stations, while any public-sector organisation – such as the police, NHS, local government – wanting an on-site charging point will now have the installation carried out for free.

This, of course, is great news for the UK manufacturing industry – as the all-electric Nissan Leaf will soon begin production in Sunderland.

John Martin, senior vice president for Nissan manufacturing in Europe, said: ‘We are at a crossroads in personal mobility. Nissan is proudly pioneering zero-emission technology through our UK operations and we are delighted that the UK Government is showing it shares our commitment to the transport of the future.

‘Electric vehicles become a way of life if the charging infrastructure is in place and governments are committed to helping drivers to make the switch. We know this from the experiences of Nissan LEAF drivers in countries like Norway.

‘This announcement has the potential to make the UK a global leader in EV infrastructure and in turn to accelerate the introduction of electric vehicles in Britain.’