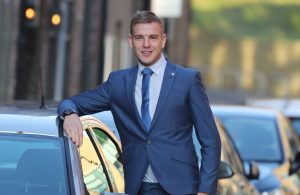 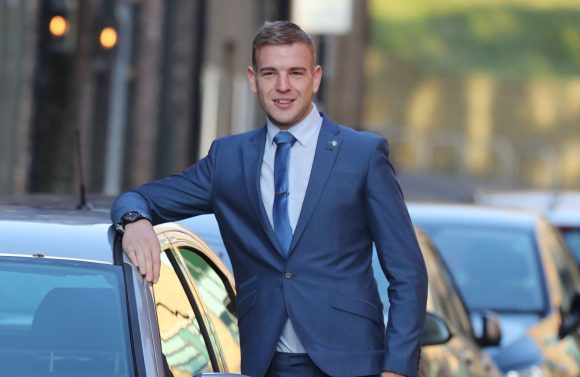 A 6FT 6IN car dealer with 69 previous convictions who drove a small convertible while sitting on the headrest, steering with his knees and waving to other drivers narrowly escaped jail today.

Adam Elliott, pictured, was also stood up at times as he drove the Ford Ka through Newcastle city centre, with his head well above the windscreen, as other drivers tooted their horns.

He admitted dangerous driving at a previous hearing and Judge Robert Adams, sitting at Newcastle Crown Court, today handed him a nine-month jail term suspended for 18 months, fined him £100 and ordered him to pay £1,500 prosecution costs. In addition, Elliott will be disqualified from driving for two years and must also carry out 150 hours of rehabilitation activity. The judge said he was ‘just persuaded’ to suspend the sentence, but told him to grow up.

Kevin Wardlaw, prosecuting, said another driver spotted Elliott on the A184 Felling bypass heading towards the Tyne Bridge on January 26 last year, and was so concerned by his driving that he gave police a running commentary over the phone as he followed him. Traffic cameras picked up Elliott driving the Ka he was selling.

Wardlaw said: “At various times the defendant was either standing up or in the vehicle with his feet on the driver’s seat, his knees either side of the steering wheel, steering with his knees.

‘At various times he waved to passing motorists as their attention was drawn by virtue of his seating position.’ 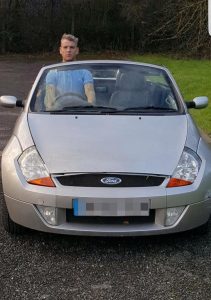 Elliott, 26, from Newcastle upon Tyne, has 69 previous convictions, including 13 offences of driving while disqualified, 18 of driving without insurance, thefts, dangerous driving and fraud.

He was stopped by a traffic officer in the city’s West End and after initially being jovial, he became ‘aggressive and petulant’, the court was told.

Cartmell said Elliott had lost his car sales business – I Buy Any Car North East – and was now a tyre dealer, describing him as ‘entrepreneurial’. But he also displayed ‘Big Brotheritis’ and was desperate to show off foolishly, the barrister said.

Referring to his client’s behaviour that day, Cartmell said: ‘He is a big man sitting in a car and he played up to it.’

The judge said Elliott’s previous denials that he was stood up, claiming the charge was merely a result of being tall, were ‘total nonsense’ and a lie. He told the defendant: ‘You are 26, you have a long history of offending. It’s about time you grew up, took responsibility for your actions and recognise the danger you could cause to other road users by your stupidity.’

The Ka’s new owner is 6ft 3in, stocky and has no trouble fitting in the vehicle, the court was told.

On SuperUnleaded.com: 12 Bands And A Singer You Need To Have On Your Driving Playlist