Home > Forum > This week on the Car Dealer Forum 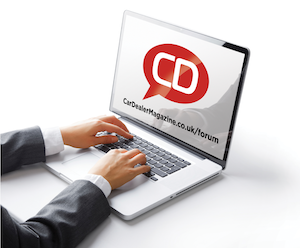 This week on the Car Dealer Forum

THIS week’s top discussions on the Car Dealer Forum include ‘January madness’ and ‘Things I learn with every deal’.

Sparky said: As expected, the ‘good news’ stock is making bonkers money in the hall with the average stuff not far behind, leaving many small dealers including myself – who can’t or won’t play ball – left scratching their heads.

Personally, I play the waiting game at times like these in the hope and expectation that the market will settle down and normal service can resume. If that means empty spaces for a few weeks then so be it.

It’s just frustrating not being able to buy the usual bread and butter stuff and while I don’t expect to nick anything at this time of year, it would be nice to have some profit left in the metal.

How does everyone else cope during this period when you may as well throw the book away?

Things I learn with every deal

Ian said: I’ve only been selling for a short while, and confess to still having lots to learn. I thought this thread could be useful to post.

A week ago, a couple appeared on the yard at quarter to five looking at a very nice diesel Picasso we have for sale. Ten minutes later I’d persuaded them that buying it was the best thing in their life.

They asked how much deposit I would take and I said £100. After that payment, I asked when they wanted to collect their car and pay the balance. They answered: ‘we’re waiting for our insurance payout, we’ve wrote our car off”. OK, not a big problem.

The gaffer gets back and although pleased, says be ready for them to cancel. Sure enough, this week they did – they have only been offered £800 for their car, leaving them £1,200 short. So now the deal has fallen out of bed and they’re borrowing a relative’s motor that is unused anyway.

If you’ve experienced a similar situation, click here to let us know.

Have you signed up to the Car Dealer Forum yet? Click here to get involved.