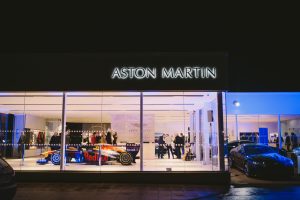 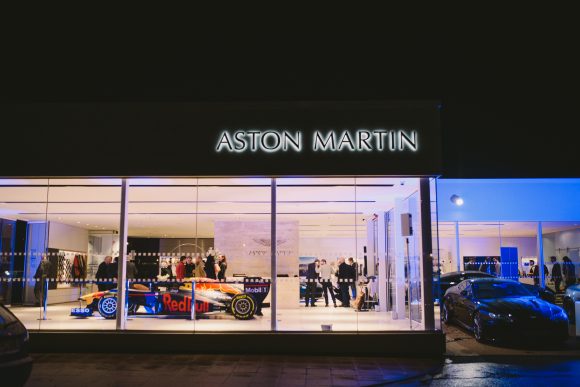 Aston Martin Wilmslow’s showroom is given presidential opening after refurbishment

ASTON Martin’s showroom in Wilmslow has reopened after an extensive refurbishment.

The Water Lane dealership has state-of-the-art facilities featuring a deluxe showroom for new Aston Martin sports cars. It also has a luxurious lounge where customers can create their own tailored new car to their exact specification, including the use of ‘Q by Aston Martin’ elements. In addition, there is a display of Timeless pre-owned models, all of which is supported by Aston Martin Wilmslow’s workshop staffed by Gaydon-trained technicians and a dedicated aftersales team, based in Lower Meadow Road.

The renovation, carried out for an undisclosed sum, took about three months and was completed at the end of 2016. Although the dealership was closed for the duration, a temporary sales centre was set up within the service area. The upgraded showroom – which was officially opened by Marcus Blake, Aston Martin’s UK region president – complements Stratstone’s other Aston Martin dealerships across the UK.

Aston Martin Wilmslow dealer principal Phil Cole said: ‘We are delighted to be opening our renovated showroom, which will provide our customers with an extensive range of new and Timeless pre-owned models. We look forward to welcoming new and existing Aston Martin owners to our new showroom.’

Blake said: ‘With this renovated showroom, Aston Martin Wilmslow will not only offer customers a space where they can buy or service their car, but also a space to personally experience the Aston Martin brand.’

On SuperUnleaded.com: Rare Aston Martin One-77 On Sale In The States