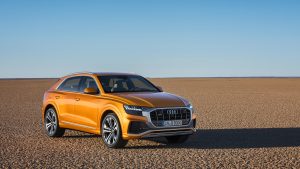 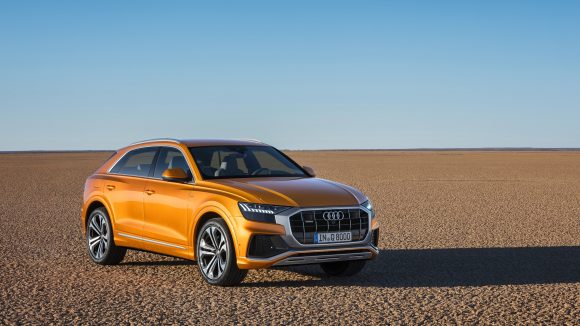 AUDI has unveiled the latest offering in its five-strong SUV range – the Q8.

A new flagship for the brand’s model line-up, the Q8 is the heart to the Q7’s head. It’s a stylish off-roader with a coupe-like rear roofline, and is intended to compete with a huge number of rivals both in-house and from outside.

Within the VW Group, the Q8 has to deal with rivals such as the Volkswagen Touareg, Porsche Cayenne, Bentley Bentayga and Lamborghini Urus, while Mercedes’ GLE Coupe and BMW’s X6 both provide strong competition as well.

The Q8 features styling similar to that of its two preceding concepts – the Q8 Concept and Q8 Sport Concept. Audi says that this previews the next-generation design language for all the brand’s SUVs, mainly in the styling of the front grille.

The distinctive ‘Singleframe’ forms an octagonal surround to the grille, which Audi describes as ‘brawny’. Moving down the car’s flanks, there are standard-fit LED headlights, bold rear haunches and wheel surrounds that give the impression of bulky arches.

The rear features a tapering roofline and a full-width glossy styling element that encompasses the Audi badge and rear lights.

Overall, the Q8 is lower and wider than its Q7 sibling but shares the same wheelbase. With only five seats inside, though, there’s more room for rear passengers.

The dash features the same layout as the A8, A7 and A6 – it consists of a twin-screen infotainment display and Virtual Cockpit digital dial pack.

The Q8 will launch with just a single engine option – a V6 diesel, badged 50 TDI and putting out 282bhp and 600Nm of torque. A lower-powered 228bhp diesel and 335bhp V6 petrol will join the range early in 2019, and all three engines are mated to 48V mild-hybrid systems to allow seamless stop-start and coasting functions. Expect a hot SQ8 and hybrid e-tron model, too. All will be mated to quattro four-wheel drive.

Prices for the Q8 are likely to start slightly above the Q7 – a price tag of around £65,000 is likely for entry-level 50 TDI models. The Q8 is set to go on sale in the summer.