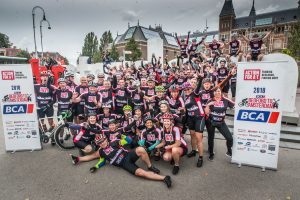 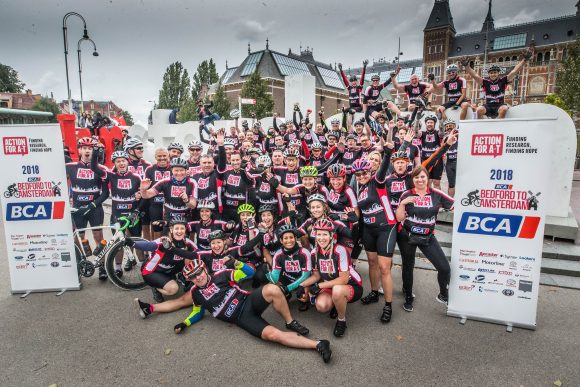 A 60-STRONG team of riders and support crew have successfully completed the 245 miles of the 2018 BCA Cycle Challenge, raising an estimated £100,000 for charity as a result.

The team of cyclists from BCA and the wider motor industry were joined by BBC news presenter and well-known cycling enthusiast Naga Munchetty, who tweeted the progress of the event to her 105,000 followers on Twitter.

The team left BCA Bedford on the morning of September 20, arriving at the Royal Palace, Amsterdam two days later.

Despite storms and driving rain on day one which covered Bedford to Harwich, and blustery conditions on day two from the Hook of Holland to BCA’s centre in Barneveld, the riders successfully covered more than 200 miles, leaving a mere 45 miles to complete on day three.

BCA chief commercial officer Craig Purvey was among those who took part in the event.

He said: ‘It was amazing and everyone who participated would like to thank all the sponsors and supporters who helped to make it possible.

‘We remain on track to raise around £100,000 for Action for A-T, the charity funding medical research into Ataxia Telangiectasia, a rare, genetic degenerative childhood disease.’

Sean Kelly, chief executive at Action for A-T, also completed the challenge. He said: ‘We would like to thank BCA, their customers and all the sponsors for supporting Action for A-T and the families who look to us for hope.

‘It appears we are on track to raise a record amount from this year’s BCA Challenge in support of Action for A-T and those funds will be put to very good use in supporting research into identifying a cure for this devastating childhood condition.’