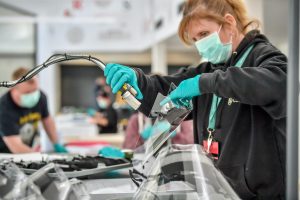 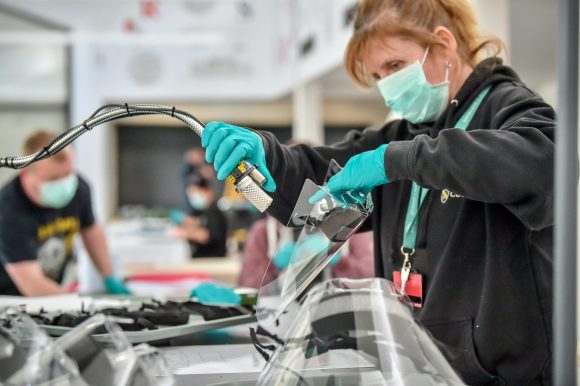 Boris Johnson is back in Downing Street and taking charge of the government’s response to the coronavirus outbreak.

The Prime Minister is resuming full-time duties at the head of the government three weeks after he was admitted to hospital with the disease.

He will chair the regular morning meeting of the government’s Covid-19 ‘war cabinet’ before heading into a series of meetings with senior ministers and officials.

The £2.8bn of funds sent to UK businesses through the Coronavirus Business Interruption Loan Scheme (CBILS) account for just two per cent of the £212.8bn currently due to small and medium firms in unpaid invoices.

Fintech invoice platform bePayd, which calculated it, said the amount of money constantly flowing through SMEs shows how important it is to ensure the cash gets through to businesses.

Chancellor Rishi Sunak is under pressure to cover 100 per cent of the loans, to speed up the application process and free up cash, although he has so far resisted.

Visiting family is the number one priority for drivers planning their first journeys when the lockdown lifts.

The AA asked 19,732 drivers where they were most likely to head in their cars when the lockdown lifts and 38 per cent said they’d visit family, while 12 per cent were desperate for a haircut and 10 per cent wanted a drive in the country.

However, the AA says one fifth are planning to drive less when the restrictions ease. AA president Edmund King said: ‘Potentially there could be major changes to the way we travel post-lockdown.’

Formerly a regional manager for BMW, Kelly has now been with Vines for nearly 17 years and will be chatting to us about how the firm has navigated the coronavirus crisis – and how it is planning to get back to work. You can watch it here at midday today.

Bentley’s 40-strong retail network in China is now fully open as the country gradually returns to work. The move has allowed the brand to start customer deliveries of the new Flying Spur in the country.

Bentely’s Kim Airey said: ‘We have been paying close attention to developments surrounding the outbreak and are now pleased to be able to reopen our showrooms with robust safety measures put in place, and allow customers back in.’

The Royal Mint is to manufacture nearly two million medical visors. Engineers developed a successful prototype in 48 hours, and already 150,000 have been made for hospitals.

Production has moved to 24 hours a day, seven days a week, at the Royal Mint’s site in Llantrisant, South Wales where the visitor attraction has been transformed into an emergency production line.

Investigation: Will fear of public transport fuel a surge in car demand?

A Car Dealer Magazine investigation has found that a fear of public transport and catching coronavirus could lead to a spike in car sales as buyers look for the safety of isolated transport.

A variety of experts told us that they believe when Britain goes back to work, many will not want to use public transport and this could provide a bounce for the car market. Read our investigation here.

The first month of the lockdown may have permanently changed many people’s shopping habits – with one in three saying they will be more mindful about what they buy in future.

Nearly two-thirds (62 per cent) of people say their spending habits have changed since the stricter social distancing measures were imposed on March 23.

With many people seeing their income squeezed, 32 per cent will be more mindful of what they purchase, while 31 per cent will cut back on non-essentials, Nationwide found. More than one in five (21 per cent) will spend less going out.

Almost two out of five leading companies have cut executive pay to reduce costs during the shutdown but only one in seven have slashed bonuses and long-term incentive payments.

The report said that in the past five years these companies have spent a combined total of £321m on chief executive pay, paid out £26bn in dividends and £42bn in profits.

Britain will pay for Covid-19 measures for decades

The UK’s recovery is likely to be slower than first hoped and Britons will be paying for action to save the economy for 20 years.

Ian McCafferty – a former Bank of England rate-setter  – said if the lockdown is gradually lifted in phases, the economy could take six months to get back on track.

He said the upswing is set to be less steep than the sharp contraction – meaning hopes of a ‘V’ shaped rebound, or even a ‘U’, may be optimistic. And he added the country faces tax hikes and austerity to cut the deficit once the immediate crisis is over.

Daily briefing are published before 9am every day. Join our WhatsApp group to get them sent straight to your phone. Email us via the website here for information.