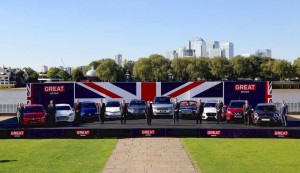 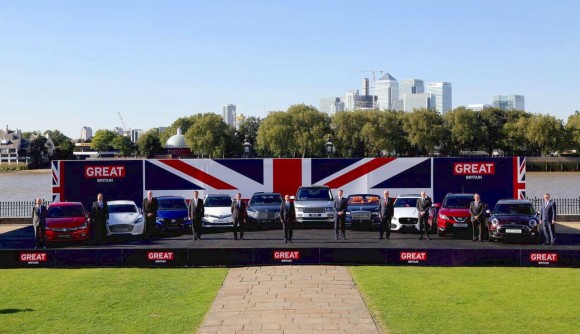 THE UK car industry united in London yesterday for a unique send-off ahead of one of the world’s most influential motor shows – and the biggest in Europe.

In an extraordinary gathering in Greenwich, senior executives from across the industry were joined by Business Secretary Sajid Javid alongside 10 of their most exciting new cars, which will be flying the British flag at next week’s Frankfurt International Motor Show.

Vehicles from the broad spectrum of Britain’s thriving automotive industry were on display, from volume-produced family hatchbacks to high-end luxury and sports models. Each car is the result of significant investment in the UK’s R&D capability and production facilities, which has supported UK economic growth.

The event coincided with further evidence of the UK’s automotive resurgence with news that the total amount of investment already announced this year has now surpassed £2 billion, with more than 4,500 new jobs created.

The UK automotive sector is one of the most advanced in the world, and global appetite for high-quality British-built cars has never been stronger, with exports to more than 100 countries worldwide. Demand across continental Europe – the UK’s biggest export market – grew by more than 10 per cent last year, and overall car exports were worth £24.6 billion in 2014 – the most ever.

The first six months of this year saw more cars produced here than in any half-year since 2008, with a vehicle rolling off an assembly line every 20 seconds. While the number of cars produced in Britain continues to rise, they are also becoming ever-more British.

Figures released earlier this year by the Automotive Council revealed that UK vehicle manufacturers spent 19 per cent more on domestically manufactured components in 2014 compared with the previous year. This growth has brought more than £1 billion of extra business to UK-based supply chain manufacturers, boosting jobs and growth nationwide.

The automotive industry’s contribution to the UK economy is also growing: it now supports almost 800,000 jobs across the country – around 160,000 of which are in manufacturing – while the sector now makes up a greater share of overall UK exports than ever before at 11.8 per cent. With year-on-year increases in productivity and technological innovation that is amongst the best in the world, the sector is globally competitive.

SMMT chief executive Mike Hawes said: ‘The UK automotive industry’s resurgence continues and this diverse range of British-built cars which will premiere in Frankfurt clearly demonstrates the strength of UK automotive. From Goodwood to Sunderland, Llanelli to Falkirk, the automotive industry supports some 800,000 highly skilled jobs making world class products of which Britain can be justifiably proud.’

Business Secretary Sajid Javid said: ‘The automotive industry is a UK success story, with government and industry working closely to boost productivity and growth. Not only do we build cars extremely well, but our research and development and design capabilities are equally as impressive. Together we are shaping a 21st-century sector that is going from strength to strength.’

Joe Greenwell, the chief executive of Automotive Investment Organisation, said: ‘The level of foreign investment we received this year demonstrates the confidence in the UK automotive sector. The companies here today are global automotive leaders who chose the UK due to our leading productivity figures and low costs, cutting-edge R&D base as well as an unprecedented demand for our products both at home and overseas.

‘The stars are uniquely aligned for the UK automotive industry, and we should be proud that the sector is leading a resurgence in UK manufacturing.’