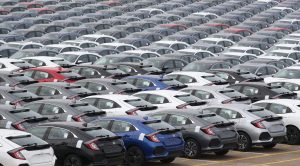 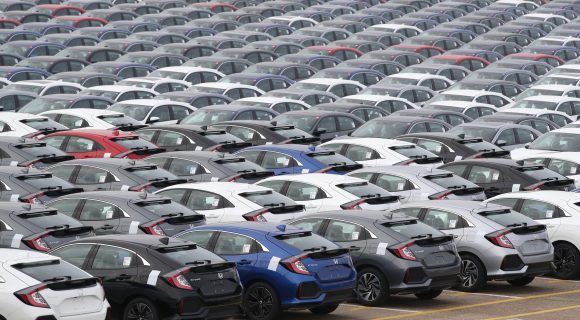 Investment by car companies halved in 2018 to £588 million as firms hold off making decisions until trading arrangements between the UK and other countries become clearer.

The Society of Motor Manufacturers and Traders (SMMT) said investment had effectively ‘stalled’ amid fears over the UK’s future trading prospects with the EU.

Just over 1.5 million cars left UK factories in 2018 – a 9.1 per cent decline on the previous year, and the lowest for six years.

SMMT chief executive Mike Hawes said the fall in investment was ‘deeply depressing’ and should send a strong signal to politicians to secure a Brexit trade deal.

‘With fewer than 60 days before we leave the EU and the risk of crashing out without a deal looking increasingly real, UK Automotive is on red alert.

‘Brexit uncertainty has already done enormous damage to output, investment and jobs. Yet this is nothing compared with the permanent devastation caused by severing our frictionless trade links overnight, not just with the EU but with the many other global markets with which we currently trade freely,’ he said.

‘Given the global headwinds, the challenges to the sector are immense. Brexit is the clear and present danger, and with thousands of jobs on the line, we urge all parties to do whatever it takes to save us from “no deal”.’

Car production for the UK fell by 16 per cent last year, while exports were down by 7.3 per cent, including 9.6 per cent in Europe and 24 per cent in China.

Exports to Japan increased by 26 per cent and by 23 per cent to South Korea, but the SMMT pointed out that both countries were subject to preferential EU trade agreements.

Time has almost run out to guarantee the arrangements will continue, so a no-deal Brexit could put a huge percentage of the UK car industry’s global trade under threat, said the SMMT.

Exports to the US increased by 5.3 per cent, leaving it the UK’s second biggest customer after the EU.

Hawes said that despite the Commons vote on Tuesday evening ‘nothing has changed’, leaving car-makers not knowing what the UK’s future trading relationship will be after the end of March.

He added it was ‘fantasy’ to believe the car industry could manage a no-deal, warning it would be a ‘catastrophe’.

A Department for Business, Energy & Industrial Strategy spokesman said: ‘As we leave the European Union, we will seek the broadest and deepest possible agreement that delivers the maximum possible benefits for both the UK and EU economies and maintains the strength of our world-leading automotive sector.

‘The automotive industry is a great UK success story, one we are working to grow through our modern Industrial Strategy Automotive Sector Deal and research funding, including millions for the creation of next-generation batteries.’