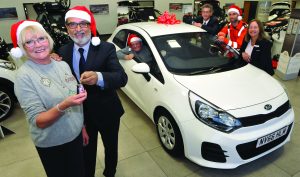 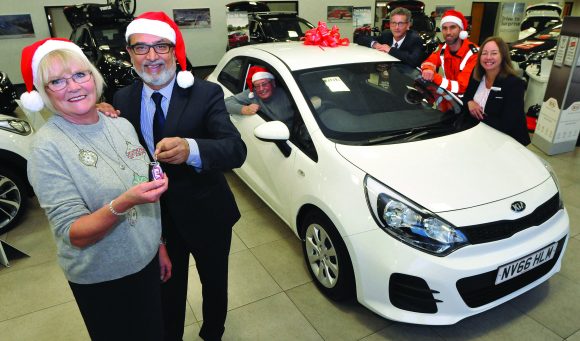 CHRISTMAS came early for a lucky woman from Middlesbrough when she scooped a new motor in a promotion organised by Jennings Kia and the Great North Air Ambulance Service.

They say things come in threes and that’s exactly what happened to 69-year-old Kath Mewse from Eston when she won a keg of beer, £50 cash and the new Kia Rio ‘1’ worth £10,345, all in the space of a few days.

The department store worker was one of thousands of people across the region who supported the charity by buying a raffle ticket for the charity’s annual car raffle, which raised more than £120,000.

She said: ‘I was absolutely gobsmacked when I received the phone call and it was the Great North Air Ambulance Service on the other end of the phone telling me I had won the car.

‘At first, I honestly thought it was a joke, but then I realised it was genuine and I had actually won – it’s all still sinking in!’

Khan said: ‘We are absolutely delighted to have been able to support the charity and their annual car raffle by donating a brand new Rio from the popular Kia range. The promotion has been a phenomenal success and raised an incredible amount for an extremely worthy cause.

‘On behalf of Jennings Motor Group, I would like to wish Mr and Mrs Mewse many years of happy motoring in their new Kia car.’

Mandy Drake, head of fundraising at the air ambulance service, said: ‘Mrs Mewse is a long-term supporter of the charity, so we are especially pleased that her support has been rewarded in this way.

‘She was one of many thousands who entered the draw, and we would just like to thank all of them for playing, because ultimately the money raised will save lives in the region. Huge thanks to all at Jennings as well for their support. This wouldn’t have been possible without them.’

Throughout the year, Jennings Motor Group has been supporting the charity with a number of fundraising events, as well as agreeing to donate the new Kia Rio as the top prize in the annual car raffle.

Pictured at top from left: Kath Mewse is presented with the key to her Kia by Nas Khan, watched in the driver’s seat by her husband Malcolm, with franchise manager Steven Flack, Great North Air Ambulance Service aircrew paramedic Tim West and PA Bev Stephenson

On SuperUnleaded.com: Crashed Car Ejects Driver Before Parking Itself