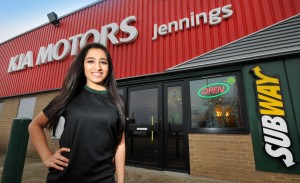 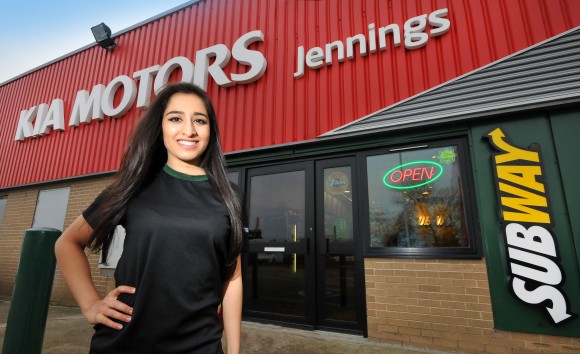 JENNINGS Motor Group has opened the doors on a new Subway store at its dealership in Stockton-on-Tees.

The Kia dealership at Preston Farm – ranked as one of the biggest in Britain for Kia Motors – has opened the outlet on the front of its existing showroom, creating nine new jobs and marking the beginning of a new business venture.

The sandwich bar is one of two Subways to open within a dealership (following the launch of Skipton Ford’s in North Yorkshire in November last year) and will be run by Natasha Khan, the 26-year-old daughter of Jennings Motor Group manager Nas Khan.

The well-known fast-food brand now has 500 stories located in innovative locations across the country, from petrol station forecourts and universities to hospitals and convenience stores.

Greg Madigan, area development manager for Subway UK and Ireland, said: ‘Non-traditional locations are a key area of growth for the brand in the UK and Ireland.

‘The simple operations that are involved in running a Subway franchise and the convenience offer make it a perfect fit for these style locations, in this case for dealership customers and those visiting the store.’

Currently working towards a degree in automotive retail management, Natasha will be responsible for the daily running of the new store and its employees.

Her father added: ‘It is the perfect venue and indeed location for such a successful brand and will be a great complement to our dealership.’

The Jennings Motor Group employs 470 people across its dealerships in Teesside and the North East, representing Kia, Ford, Mazda, Seat and Mitsubishi, in addition to its Harley-Davidson branch in Leeds.

MORE: Used car buyers demand proof of mileage from dealers, according to survey

On SuperUnleaded.com: Westfield Shopping Centre Becomes A Mario Kart Track For The Day