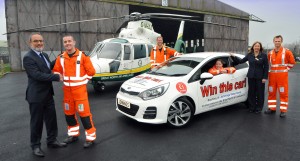 The dealer group, which operates Kia, Ford, Mazda, Seat and Mitsubishi dealerships across the region, in addition to a Harley-Davidson branch in West Yorkshire, has pledged its support to the charity for the duration of 2016.

Initially, fundraising was kick-started at the beginning of the year with a £2,000 donation, which was presented to the charity by Jennings Motor Group’s managing director Nas Khan and his PA Bev Stephenson.

This week the charity, which provides air ambulance services across the North East, North Yorkshire and Cumbria, teamed up with the region’s dealer group to officially launch its sixth consecutive car raffle promotion.

Members of the public will be given the opportunity to win a brand new Kia Rio ‘1’ model worth £10,345, courtesy of Jennings Motor Group’s Stockton and Washington-based Kia dealerships.

Mandy Drake, head of fundraising at GNAAS, said: ‘We would like to offer our whole-hearted thanks to Jennings Motor Group for donating the car. We were stunned when they came up with the idea.

‘As ever, all the proceeds will be used to support the work of our helicopters and their life-saving crew across the entire region. By buying a ticket, members of the public are making a very real contribution to the service, while giving themselves a chance at winning a new car. It’s a win-win!’

Nas Khan, managing director of Jennings Motor Group, added: ‘We are absolutely delighted to be supporting both the charity and their annual car raffle by donating a brand new car from the popular Kia range. I’m sure the promotion will be a huge success and contribute towards generating essential funds for such a worthy cause.’

GNAAS operates three helicopters, 365 days a year across its bases at Durham Tees Valley and Langwathby, near Penrith, Cumbria. Last year it rescued 818 patients and the car raffle campaign has raised £687,616 since 2011.

Raffle tickets cost £1 each and can be purchased online by visiting www.greatnorthairambulance.co.uk. The closing date for entries is November 7 and the draw will take place on December 1, 2016.

MORE: We embark on 100 Days of Trading Up in aid of Great Ormond Street Hospital