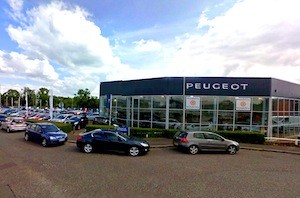 City Peugeot becomes the company’s 12th dealership and will offer new and used car and van sales, servicing and MOTs as well as parts and accessories.

Managing director Steve Hemlock says there are further growth plans in the pipeline. He said: ‘We’ve got a lot of expansion on the cards all planned for completion by the end of 2014.

‘This involves some revamping of existing premises and we’re also working on some new ones due to launch in 2015.’

The dealership becomes City Motor Holdings’ third Autoplaza site, joining premises in Basingstoke and Reading. Hemlock says he has no plans to expand beyond these areas, though.

‘We will expand with franchises we’re comfortable with in an area we like,’ he said, ‘and as a financially strong company we’re always looking at other opportunities.’

The company has been turned around in the past 18 months after a management buy-out and has 310 employees.