Dealers could be missing out on nearly £2m of profit on a typical trading week by not using analytics to correctly price up stock.

In the video above, Keatley presented a range of fascinating data charts which showed just how much money dealers could be losing.

‘What about those vehicles that had a high retailer rating, a very high desirability score and were hot stock? 2,695 units. Those vehicles were priced at 92.88 per cent when retailers in this marketplace typically transacted at 98.42 per cent.

‘Based on the average retail value of those 2,695 units, which is £12,929, it’s five and a half per cent less than where they typically transact – there’s nearly £2m that’s out there of lost profit with hot stock being priced too aggressive.’

Auto Trader data can be as broad or as granular as dealers want it to be, said Keatley

‘Our data can go right down to make, model, derivative, plate, year and even spec. The vehicles on autotrader.co.uk are just the tip of the iceberg – we actually track 1.9m vehicles across the whole market, from fleets, lease, OEMs, auctions and rental companies, not to mention the 19,000 cars added and removed each day from Auto Trader.

‘Our data set is absolutely phenomenal.’

Our data is really well absorbed in the marketplace, and retailers are using it not solely but to complement their other tools they use to price their stock to market

‘Our data is really well absorbed in the marketplace, and retailers are using it not solely but to compliment their other tools they use to price their stock to market.’

With Auto Trader’s data making it easy for customers to compare prices, surely there’s an inevitable race to bottom that will squeeze dealers’ margins?

‘I don’t believe it’s a race to the bottom,’ said Keatley.

‘The price flags and markers are there to drive transparency – not only from the consumer’s perspective, but also from a dealer’s, too. A retailer can make that decision on how to price that stock and the consumer knows if they’re getting a good deal.

‘It’s not a race to the bottom but to the middle.’

The trio admitted that the dealers who are missing out on crucial profits are not doing so deliberately, but it’s often due to lack of time to monitor analytics – and this is where Real World Analytics (RWA) comes in.

The company provides business intelligence solutions for dealers and dealer groups to drive performance and profitability. 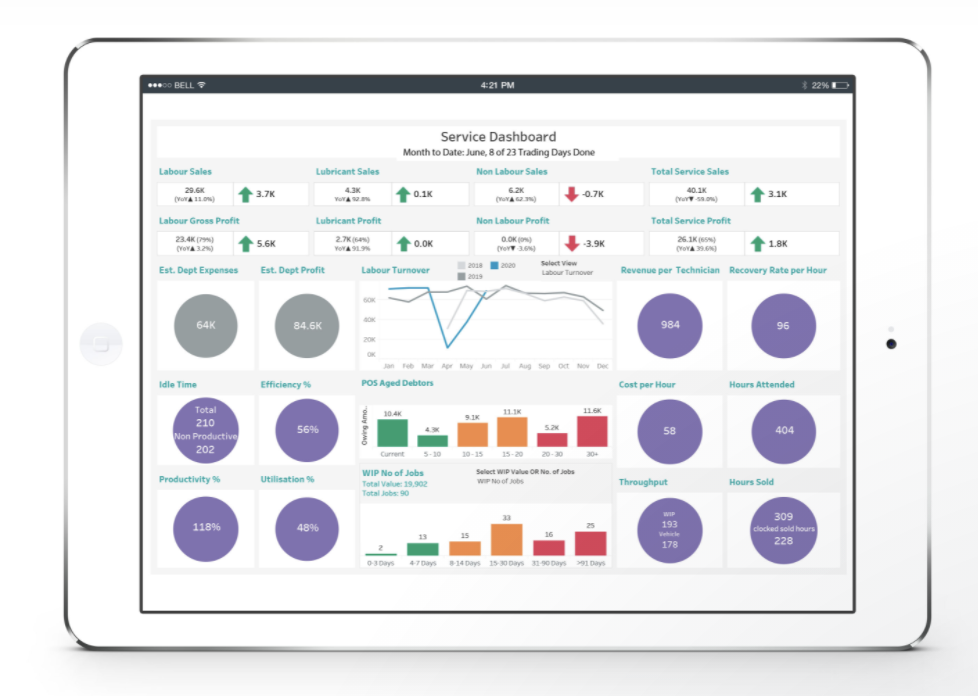 RWA can turn data into insights and it pulls information, such as Auto Trader’s granular data and a dealer’s CMS, into easy to digest dashboards.

Automated reports can also be generated to help time-poor dealers keep on top of their stock, their profits and, ultimately, their businesses.

‘A slogan we have is “one version of the truth”‘, said RWA’s automotive data scientist, Neil Murphy.

‘A common thing we hear from dealers is that people come to the table with different sets of numbers. We create one data platform – so everything is working out and everybody’s working off the same data set.

‘We’re taking all of this information and market data on a daily basis.

‘We’re delivering this information to sales managers, particularly around the pricing, so if there’s anything that’s out of kilter or off policy, we’re showing them those exceptions to the sales managers daily.

‘Dealers are then optimising their potential margin.’

Keatley added: ‘We’re seeing 13,486 price changes per day on and circa 19,000 cars added and removed each day – the marketplace is moving too quickly. If dealers can have reports and that highlight the opportunities and actions they need to do, there’s huge potential.’

In the video above, Neil Murphy demonstrates the simplicity but also the insight that can be achieved from RWA’s dashboards, and Paul Keatley shows just how granular Auto Trader’s data can be.