by John Bowman
in News
0

A dealership in East Yorkshire is going all ‘Willy Wonka’ as it prepares to open its doors again and put people at ease at the same time.

Hull Mitsubishi has had its showroom window and entrance done out specially for its reopening event, drawing on the 1971 film adaptation of the famous Roald Dahl novel Charlie and the Chocolate Factory.

General manager and director Andrew Iveson told Car Dealer it was dreamed up by staff member Gabriella Petherbridge, who is in charge of marketing and customer relations, and brought to life by a local signmakers – who didn’t believe at first that it was for real!

‘The idea was that Willy Wonka reopened his chocolate factory and we’re reopening the dealership, so it’s in that vein,’ he said.

‘Sometimes when it looks a bit different or looks a bit quirky that’s good because dealerships are so sterile places sometimes, so it breaks up the norm.

Finishing touches are being put to the inside of the Livingstone Road showroom, which continues the theme, and 2,000 ‘Golden Ticket’ invitations have been sent to customers.

An extended reopening event is taking place between April 12 and 30, offering vouchers worth up to £500, special prizes plus – in the style of Willy Wonka – ‘good egg’ or ‘bad egg’ gifts depending on the Golden Ticket.

‘The whole idea is if any customers have got a little bit of anxiety about coming through the doors, it’s instantly fun and a little bit more relaxed than it probably has been before,’ said Iveson.

‘We’ll also be spending a little bit of time talking to the people about life in general rather than just wading in.’

Timed appointments are being made available via the tickets as part of anti-Covid measures to ensure there isn’t a large number of people in the dealership at any one time.

‘I’m acutely aware that you’ve got a moral duty not to suddenly bring a whole host of people into the dealership at once so the showroom isn’t packed,’ said Iveson.

‘People are going to be a little tentative about coming into the showroom. I’ve done it over a longer period of time so that people have got more opportunity to book appointments.’ 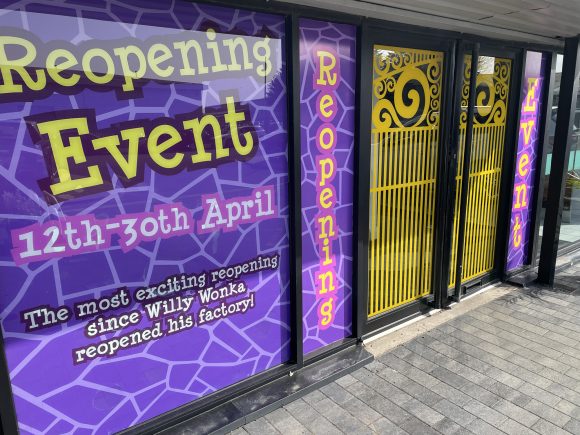 He added: ‘There is a pent-up demand, and if you are ready and stand out from the rest you should hopefully sell a significant amount of cars. The signs outside have already made a big impact.’

Iveson commented that it was an understatement to say that he was looking forward to the reopening.

‘I’m more excited about it than Christmas!

‘You don’t get much job satisfaction any more in many jobs, and I’m more excited about the fact that we’re actually going to reopen and get doing what we’re good at and get going again.

‘It’s not money-driven or anything like that on this occasion. It’s just that feeling of wanting to get back and do your job.’

The showroom is celebrating its 30th anniversary as a solus Mitsubishi dealership this year, but as the manufacturer withdraws new model launches from Europe the Hull business will be taking on an Isuzu franchise in May and looking to expand further.

‘It’s a nice exciting time for the dealership,’ said Iveson.

Man is charged with causing £100,000 of damage to cars at dealership

Man is charged with causing £100,000 of damage to cars at dealership