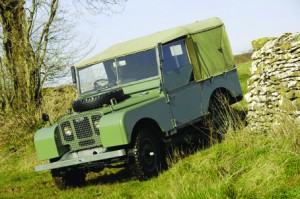 A FIRE at a classic Land Rover dealership has left its owners with only the remnants of a unique collection worth £100,000.

Four of six vehicles at the specialist site were completely destroyed. They dated back to the years between 1968 and 1979 and had an estimated value of £20,000 each.

Firefighters were called to the Land Rover Centre in Huddersfield at 5am on July 21.

Two crews broke through the entrance gates to find the fire in the covered parking area where the classic vehicles were stored.

The fibreglass roof had melted onto the vehicles, which caused them to catch fire, destroying the interiors and in some cases melting the aluminium bodywork.

Company founder Peter Garside told the Yorkshire Post: ‘The Land Rovers damaged were either Series 2 or 2a classic Land Rovers, and there was one Series 3.

‘The fire service and the police have both had a look and they don’t know how it started, the sheets on the roof went up and something set them on fire.

‘The fire has destroyed a lot of hard work. It takes about three weeks to build each one up from the chassis and we can’t just go out and replace the parts.

‘We have to look far and wide for them.’