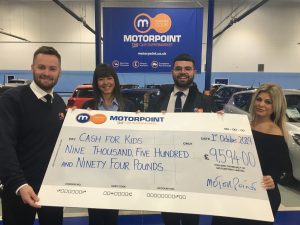 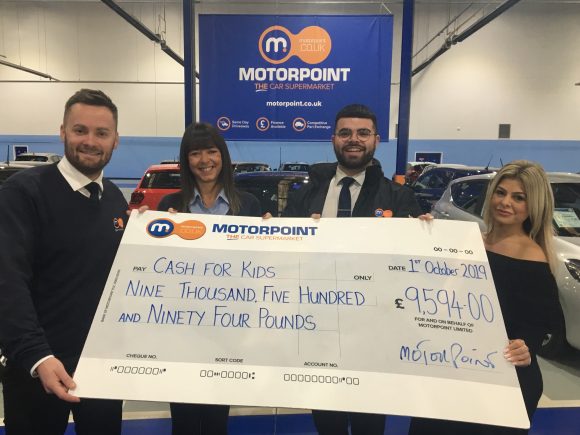 MOTORPOINT’S drive-in cinema in Sheffield has raised nearly £10,000 for a children’s charity.

The independent car retailer put on a special outdoor screening of The Greatest Showman in the grounds of its seven-acre branch on Sheffield Business Park in aid of charitable partner Cash for Kids – and it proved to be a sell-out, with film-lovers from across the region flocking to watch the Golden Globe- and Grammy-winning musical. More than 750 people attended the event, raising £9,594.

All proceeds from the annual event, which is now in its third year, will go to the Sheffield-based children’s charity, which supports children who are sick, disadvantaged or in need of extra support. Almost £18,000 has been raised for Cash for Kids to date through the Motorpoint Sheffield drive-in cinema.

Cash for Kids is the official charity of Bauer Radio, and following the film event in late September, staff from the South Yorkshire branch of Motorpoint presented the cheque to Penny Gibbs, head of sales at Bauer-owned Hallam FM.

Chris Goodison, general manager of Motorpoint Sheffield, said: ‘It was fantastic to see so many people having a wonderful time at Motorpoint watching The Greatest Showman. And the best thing about it was that collectively we helped raise such an incredible amount of money for Cash for Kids.’

Michelle Osborne, charity fundraising executive at Cash for Kids, added: ‘I really can’t thank Motorpoint enough for hosting their third annual drive-in cinema. It was a huge success and the record amount of money it has generated will help make a big difference to the lives of children up to the age of 18 in Sheffield and South Yorkshire.’