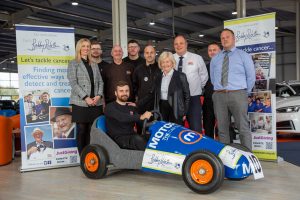 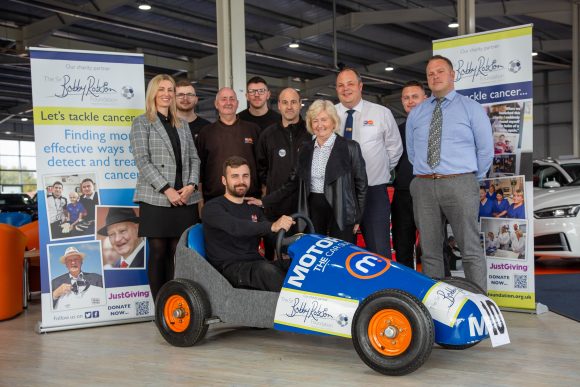 MOTORPOINT Birtley has raised £1,500 for the Sir Bobby Robson Foundation to help in its fight against cancer.

Launched by Sir Bobby in 2008, the foundation has raised more than £13.5m to find more effective ways to detect and treat cancer, with the money directly benefiting cancer patients in the north-east of England and Cumbria.

The former England footballer and manager, who was born in County Durham, died of lung cancer in 2009 at the age of 76, and staff at the branch of the independent car retailer, which recently adopted the foundation as its charitable partner, have organised various fundraisers to support it.

They have included building a soapbox to compete in the North East Soapbox Challenge in Herrington County Park, as well as several of the team taking part in The Great North Run.

Richard Start, general manager of Motorpoint Birtley, said: ‘I am extremely proud of the whole team for their efforts in raising so much money for The Sir Bobby Robson Foundation in such a short space of time.

‘Every single person has really gone above and beyond to help make a difference and support people with cancer in the north-east.’

Lady Elsie Robson, Sir Bobby’s widow, dropped in to find out more about the fundraising the team had been doing and said: ‘It was a pleasure to visit Motorpoint and to thank the staff there for their fundraising efforts. Everyone was so enthusiastic about helping us continue our work and it’s greatly appreciated.’

MORE: Motorpoint rises to the challenge for ‘soap and glory’