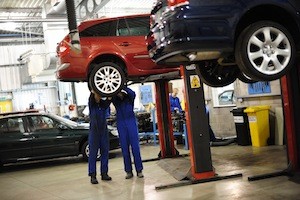 ONE in six of drivers who own 10-year-old cars still use main franchised dealers to service their vehicles, despite the large premium they have to pay in labour rates.

According to Warranty Direct, that 16 per cent figure more than doubles for owners of three-year-old vehicles, with 37 per cent choosing to have their cars checked at a franchised workshop over an independent.

The new study of more than 70,000 policies shows that more than 22 per cent of motorists with three to 10-year-old cars trust the main dealer workshop over independent garages, despite the higher charges they often face.

More surprisingly, even when six-year-old cars are three years out of warranty, 24 per cent of drivers will continue to choose franchised over non-franchised for servicing and repairs.

Looking at the data by brand, Lexus, Porsche and Mercedes-Benz owners are most likely to take their vehicles to franchised workshops with 58 per cent, 54 per cent and 49 per cent respectively choosing a main dealer.

In contrast, just 10 per cent of Fiat owners and 11 per cent of Vauxhall owners take their vehicles to a franchised dealership premises.

In September, Warranty Direct reported that average labour rates for garages increased by 33 per cent in the last decade to around £75 an hour for franchised and non-franchised combined.

Research revealed that the average price difference between franchised and non-franchised premises was around 23 per cent more for a main dealer workshop’s hourly rate – for some premium manufacturers it was as much as 35 per cent more.

Managing director at Warranty Direct, Duncan McClure Fisher, said: ‘Once cars leave the protective umbrella of the manufacturer warranty and are on their second or third owners, they are typically lost to the manufacturer network and that has a negative effect on extended warranty penetration, customer retention and workshop absorption rates.

‘But our research shows that drivers do value and trust the work of the franchised network over the independent sector.’