Land Rover has pulled the covers off its long-awaited new flagship SUV, the Range Rover.

Arriving early next year, the reinvented luxury SUV is only the fifth new Range Rover since the model debuted in 1970. It launches with a range of electrified engines plus new technology and will come as a pure-electric version in 2024.

Perhaps unsurprisingly, Land Rover’s designers have shunned the temptation to radically overhaul the classic Range Rover look and instead have focused on paring down the styling.

The front end has similar proportions and appearance to the outgoing model, with only the new grille and cut-glass-like digital LED headlights appearing to be different. The new car still has the falling roofline, strong waistline and rising lower sill that’s been a feature of all previous four generations of the Range Rover.

What really marks out the new car from the previous Range Rover is the rear end, which is dominated by a gloss black panel that extends across the tailgate and includes ‘hidden until lit’ vertical tail-lights.

It gives the posh SUV a rather futuristic look, quite unlike other Range Rovers with their rather ornate rear lights on show. The Range Rover’s famous split-opening tailgate still remains, though, and buyers can opt for the ‘Tailgate Event Suite’, which turns the tailgate into luxurious seating for two people. 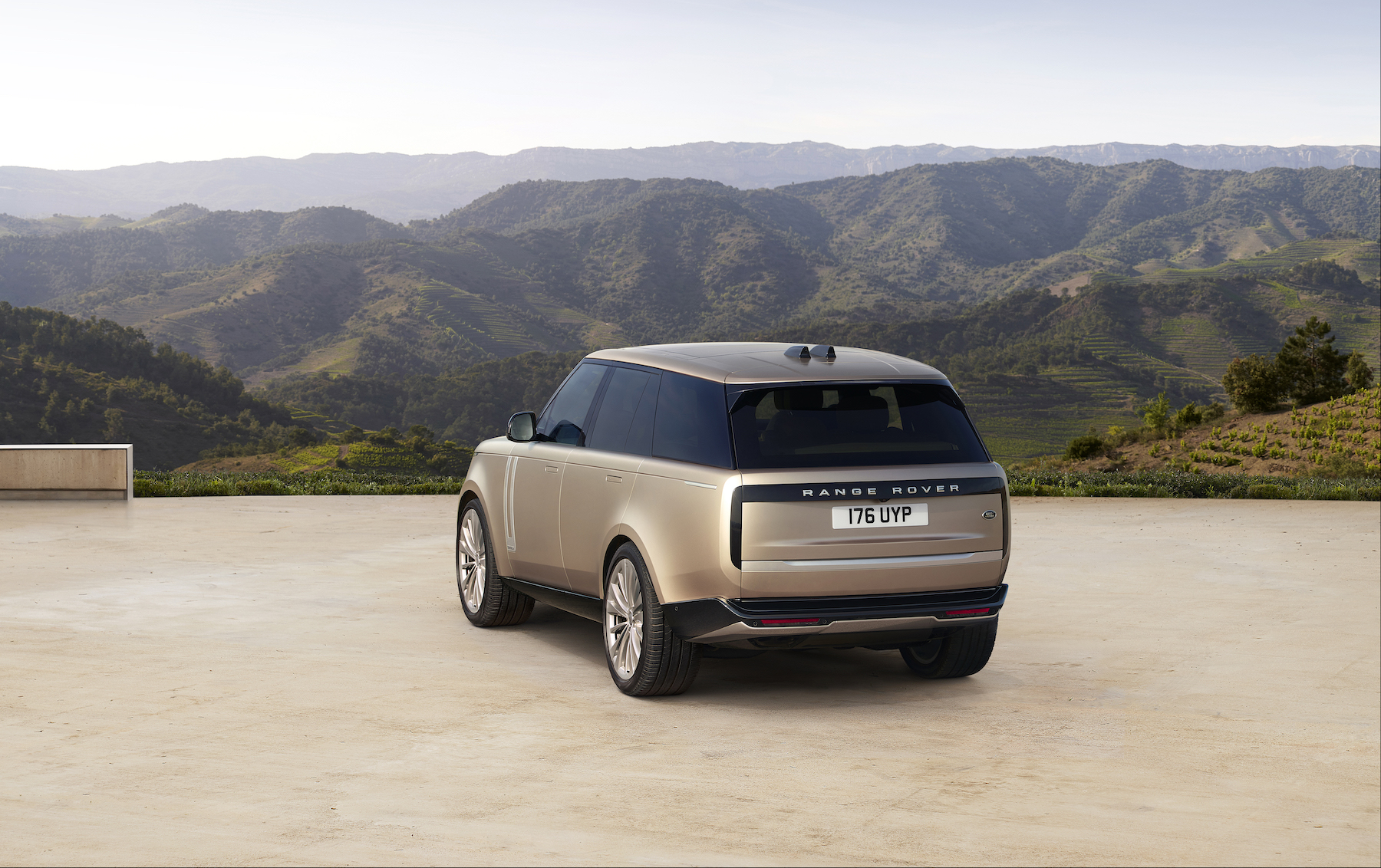 Other styling changes – which could also be classed as technological improvements – include fully flush window glazing and the bonnet shut-line that’s twice as tight as the old car’s.

Inside, the Range Rover gets a new interior that’s posher than ever. Land Rover says it’s worked hard on making the new car the perfect ‘calm sanctuary’ with a focus on unfussy design and high-quality materials.

And for the first time on a Range Rover, buyers can choose between leather upholstery and an eco-friendly interior that uses a mixture of wool, artificial leather and recycled materials. 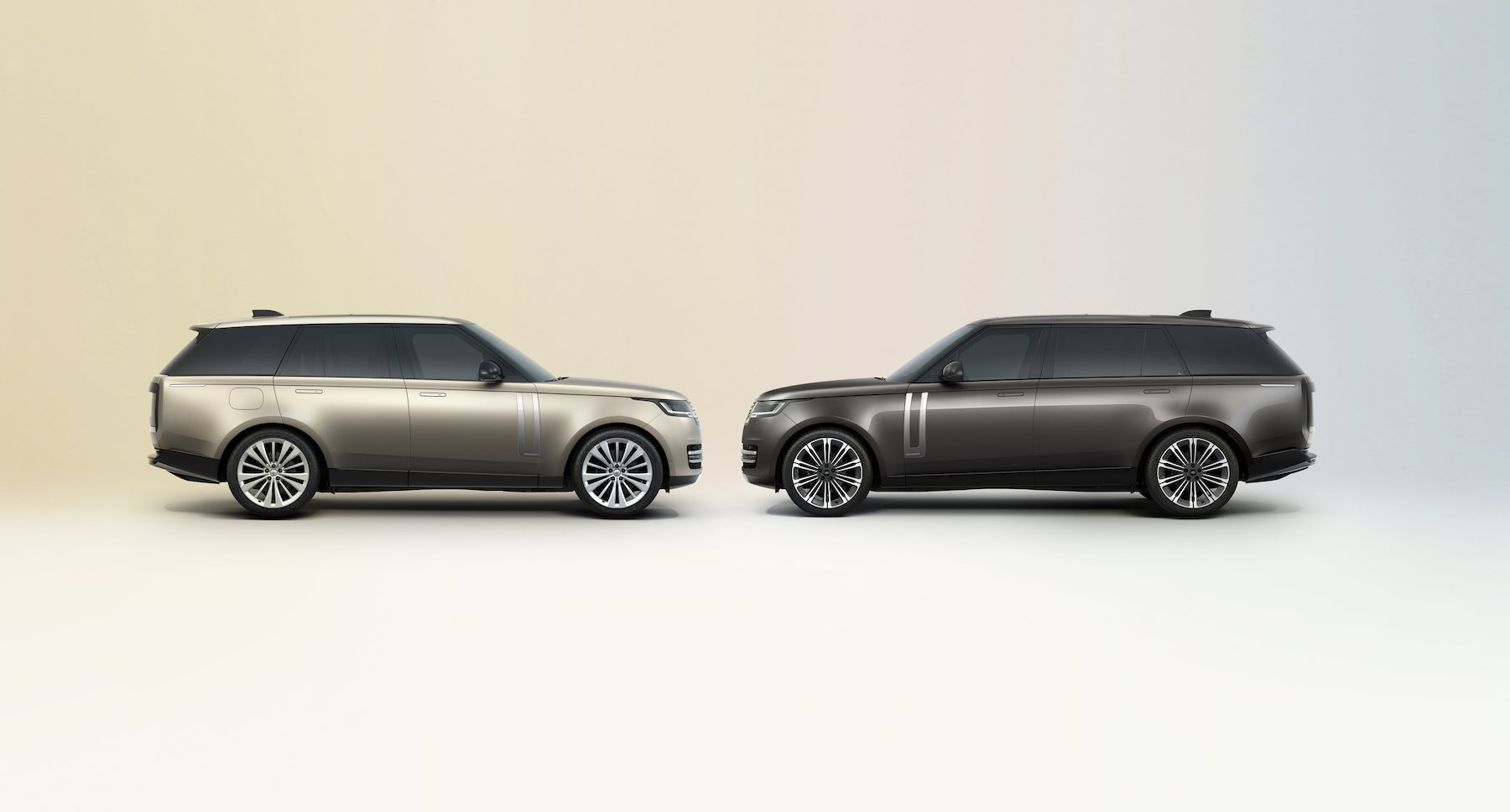 In terms of technology, the new Range Rover gets a Cabin Air Purification Pro system to stop nasty bacteria from entering the car.

One of the cleverest is the remote parking system that allows the driver to manoeuvre the Range Rover in and out of parking spaces from their smartphone while standing up to three metres away, and every Range Rover has all-wheel steering.

Despite vowing never to do so, Land Rover will now offer a seven-seater Range Rover after bowing to pressure from international customers.

The Range Rover Long Wheelbase, with a 75mm longer wheelbase, will be offered as a standard five-seater or as a seven-seater with two extra seats in the boot. And just like the Volvo XC90 and Land Rover Discovery, the two rearmost seats are large enough to carry adults. 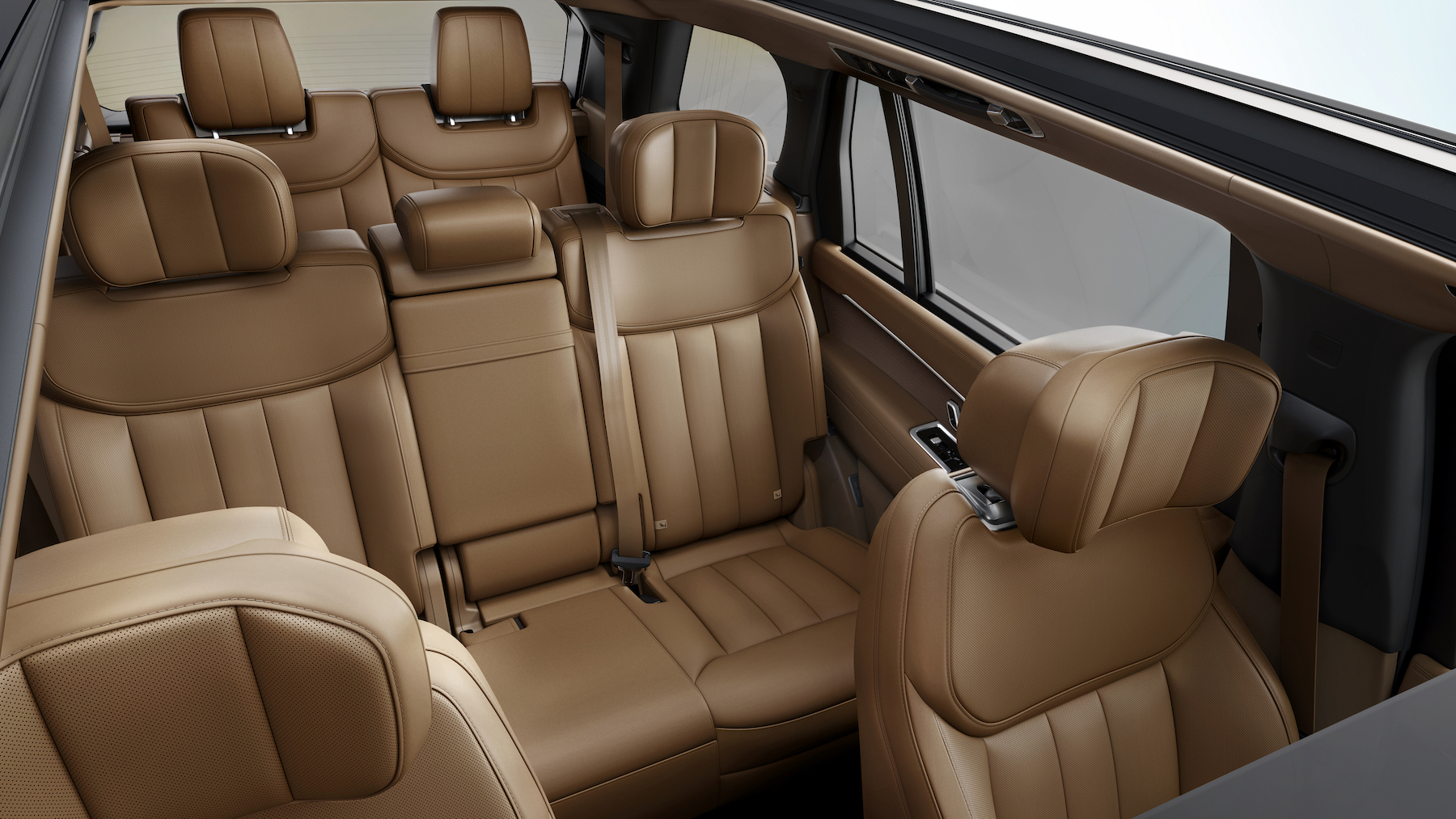 High-flying CEOs and the super-rich might not be that interested in the seven-seat version, so happily, just like the previous Range Rover, there are a range of even posher models.

Standard and Long Wheelbase versions can be specified with four seats rather than five with the Executive Class pack.

A centre console electrically slides between the two outer rear seats and houses an eight-inch touchscreen, allowing passengers to ‘fine-tune’ the rear compartment, while the seats themselves are heated and cooled, can be inclined by four degrees and offer a ‘hot stone’ massage.

Executive Class Comfort-Plus seats add a heated foot rest and calf rest, while all Range Rovers can be specified with electric doors – for rear passengers, a tug on the door handle will automatically open the door, while the driver can even close their door automatically when they press the brake pedal. 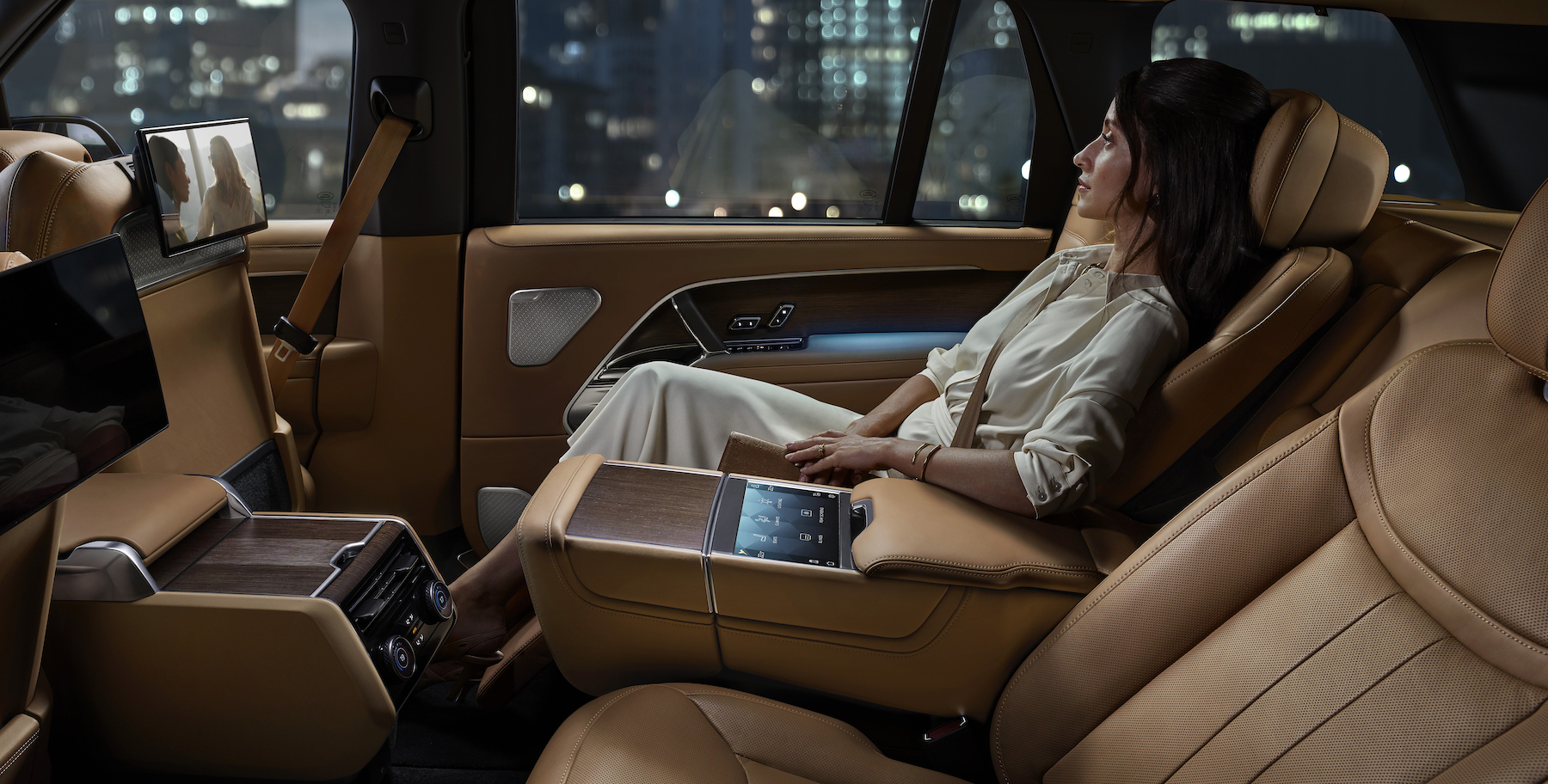 If that’s not luxurious enough, from launch there will be a ‘hand-crafted’ Range Rover SV version.

Two design themes are available – ‘Serenity’ focuses on luxury and ‘Intrepid’ offers a racier look and feel – while on the Long Wheelbase Range Rover SV there’s even the option of an ‘SV Signature Suite’, which adds two 24-way electric seats, a fixed centre console, TV screens and an electrically deployable table.

On the road, the Range Rover is the first Land Rover to get the brand’s new ‘Dynamic Response Pro’.

There’s also a new air suspension system that reads the road for potholes ahead, torque vectoring by braking to enhance ability and grip on twisty roads, while to make towing manoeuvres easier there’s Advanced Tow Assist, Hitch Assist and Trailer Stability Control – the first one allows the driver to reverse a trailer attached to the car by using a rotary controller on the centre console. 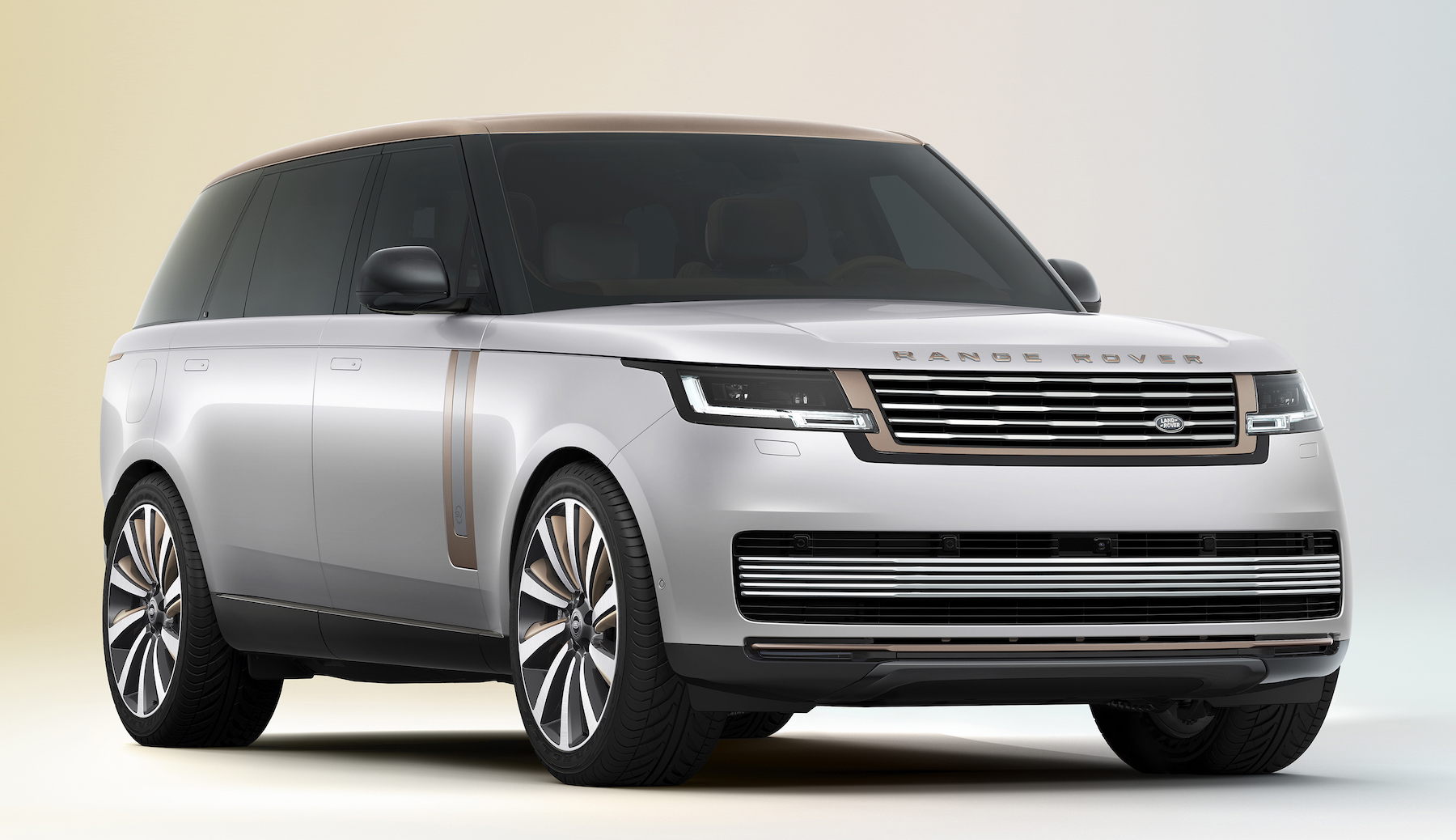 Meanwhile, off-road there’s Terrain Response 2 for maximum off-road capability, and the system features a configurable option that allows the driver to tailor the car to how they want it to perform off-road.

The new Range Rover can also ford up to 900mm of water, and there’s an active locking rear differential as well.

The all-wheel-drive system is in permanent four-wheel-drive mode when the car is travelling off-road, pulling away from a standstill, in cold weather, and at speeds above 100mph.

Two-wheel-drive mode, for better fuel consumption, is engaged at speeds above 21mph and below 100mph.

Along with all of this, the fifth-generation Range Rover also sits on a new platform called MLA-Flex. It’s for this reason the Range Rover is able to come in plug-in hybrid and full-electric versions.

There are a pair of petrol plug-in hybrids both using a 3.0-litre straight-six engine mated to a 38.2kWh battery (31.8kWh useable) and a 140bhp electric motor, giving a pure-electric range of up to 62 miles (50 miles real-world claimed) and emitting less than 30g/km of CO2.

Both can also be rapid-charged up to 50Kw, while a full charge from a 7.2kW home wallbox will take five hours.

The only difference between the pair is the amount of power available from the petrol engine – the P440e makes 296bhp giving a total of 434bhp, while the P510e packs 396bhp giving a combined 503bhp. 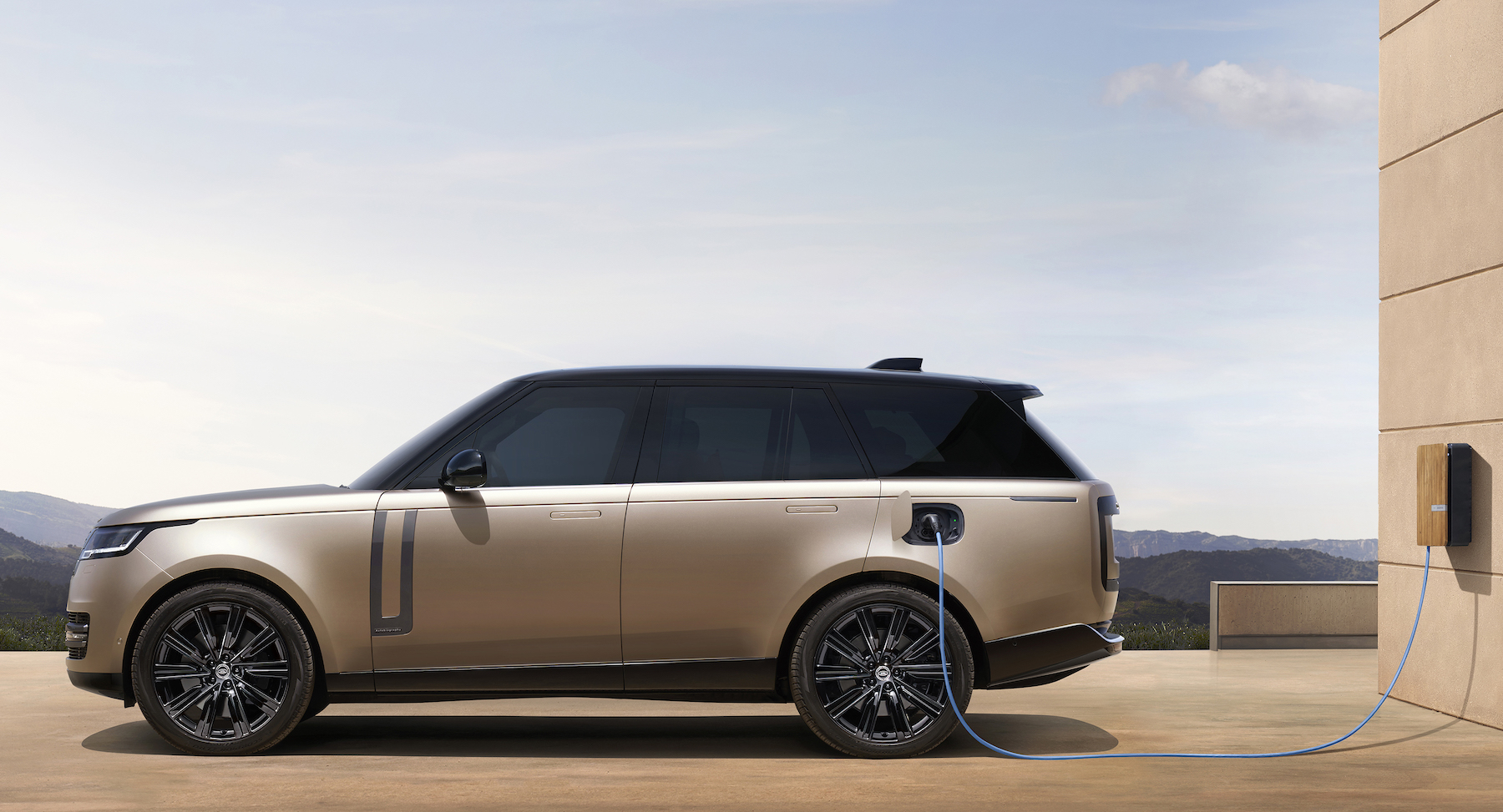 A full-electric Range Rover will launch in 2024, likely to be Land Rover’s first pure EV, but no details have been revealed as to its battery pack or range on a full charge.

Aside from the SV, there will be SE, HSE, Autobiography and First Edition trim levels.

The Standard Wheelbase comes in all engine options, with prices starting at £94,400 for the D300 diesel, while the Long Wheelbase gets all engines bar the P510e PHEV but only comes in Autobiography and First Edition levels for now. Prices for the LWB start at £120,000.

The seven-seat Long Wheelbase model only gets petrol and diesel power and comes in all trim levels apart from the First Edition. Prices start at £102,700.

The SV, meanwhile, only gets the twin-turbo V8, P510e PHEV and D350 diesel engine options, but prices haven’t been confirmed yet.